Yala is home to 44 mammal species, 46 reptile species and 215 bird species 6 of which are endemic to Sri Lanka. Common birds are Brahmini Kites, Bee-eaters, Painted Storks, Asian Open bills, Black-headed Ibises and Sri Lankan Jungle fowl, which is the national bird. Chances to observe salt water crocodiles are high. Though Yala is not as densely populated by elephants as Udawalawe, it’s almost certain you can observe small herds of female elephants and lonesome tuskers on a half-day safari. The park is open from 5.30 a.m. till 6.30 p.m. Most visitors book a jeep tour of three to four hours in the early morning or in the evening. Full day safaris are on offer, too. Overnight stays are possible in bungalows, but since 2013 only very few tour operators have been allowed and still able to organize camping tours, we can arrange them with the help of our partners. Most tourists visit Yala block 1, which indeed is the most spectacular of Yala National Park with best chances to observe a variety of mammals and leopards in particular. But block 1 is the area almost all tourists visit and this is why it’s often crowded with jeeps. Nonetheless, Yala block 1 is really worth a visit, particularly for day trippers. However, we are able to organize real safaris in other blocks, too. The classic multi-day offroad safari starts at block 1 and then crosses the lonesome Yala block 2, which is situated between the rivers Menik Ganga and Kumbukkan Oya. The adjacent Kumana National Park in the east provides excellent camping grounds allowing nighttime observations, too. This off-road adventure is not possible after heavy rainfall, as there are no bridges to cross the river. And nighttime observations are only recommendable in the two weeks around full moon. Usually, Yala National Park is closed in September and begin of October. 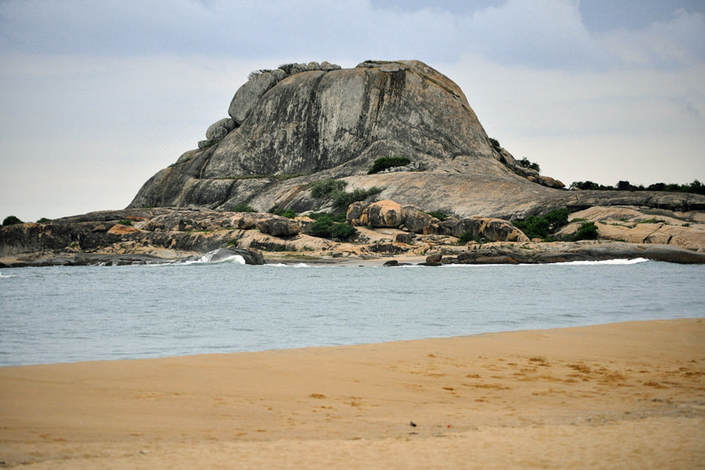 Sri Lanka's most famous national park has two different names. "Ruhuna" is a name for the southern and southeastern plains of the island, referring to the ancient kingdom of the same name, the capital of which was Tissamaharama, where most Yala safaris start today. "Yala" is the name of a former village and beach inside the national park. The village is located close to the river mouth of the Menik Ganga, which separates Yala Block 1 from Yala Block 2. Thus, Yala in a narrow sense is just the easternmost point of the national park's most popular block 1, the farest point visited by ordinary half-day or full-day safaris, in 17 km distance from the Palatupana Entry Gate near the visitors center. There is another main entry of Yala block 1, Katagamuwa Gate 14 km further north, in only 6 km distance from Kataragama town. The distance from this gate to Yala Beach is about 17 km, too. Yala Beach was the site of the national park's most popular bungalows for overnight stays. Tragecially, it came to international attention when 22 Japanese guests of the camp fell victim to the Boxing Day Tsunami 2004. A small memorial was built at the site. The landmark of Yala Beach is the promontory of Patanangala Rock, the beach bears also the name of Patanangala. Multi-day safaris start in this area to Yala block 2, crossing the Menik River.

Yala world-famous for its leopard population 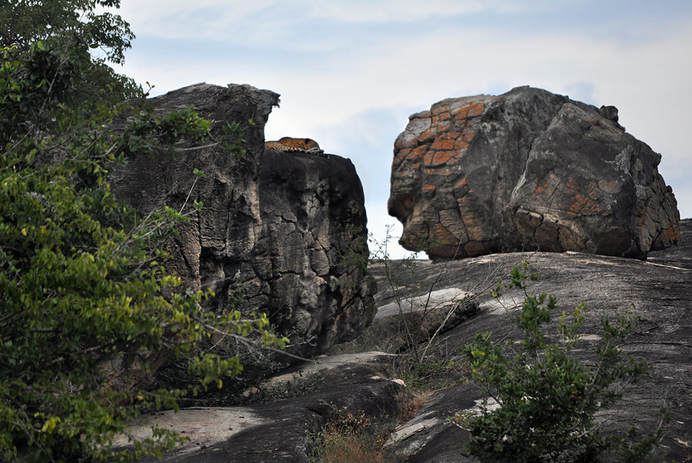 Most visitors of Yala National Park come here for a very specific purpose: Yala safaris are leopard safaris. As mentioned, Yala Block 1 is the best place in the entire world to spot wild leopards? Why is this superlative not just advertising exaggeration? Sri Lanka is the country which has the highest density of leopards in the world. There is a simple reason for it. There are no other big cats competing with leopards, as there are no tigers and no lions on the island. So all the big cats' prey is for the leopards and they have no other cats as natural enemy's in Sri Lanka. A second cause might be that Sri Lanka's wildlife protection, although critized, is comparativley better than that of other developing nations.

However, there are two leopard hotspot on the island. Wilpattu National Park and Yala National Park. Wilpattu, which is the slightly larger and older wildlife park, situated in the northwest of the island, has the highest leopard density in the entire world. But there are less open grassland areas and less rocky outcrops in Wilpattu. Leopards love to lie on boulders looking for prey or just relaxing. There are many more rocks in Yala than in Wilpattu, and this and the higher visibility range in grasslands are the reasons why chances in Yala are higher to spot leopards. Nonetheless, on a normal half-day safari, chances to sight a leopard are below 50 percent. A full day in Yala combined with another half-day safari will increase the chances to more than 90 percent. However, this website, though advertising for Sri Lanka holidays - and for Sri Lanka as a nature-holidays destination in particular, feels obliged to be honest with the travellers. You should be aware, that usually there will be many jeeps and many tourists at the same place where a leopard was spotted. The rangers inform each other quickly, because all tourists want to see a leopard, so they quickly gather wherever one of these beautiful animals is reported to have been seen. Although block 1 is the main leopard region of Yala, there are untouched areas in the national park, too, where leopard density is high. 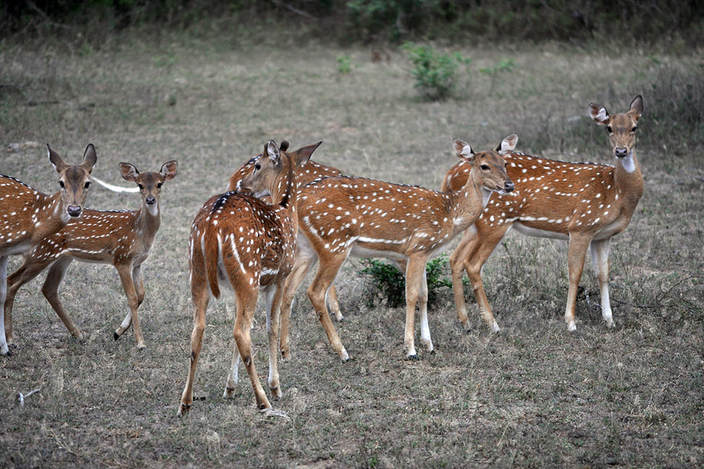 Sri Lankan spotted deer are considered a subspecies (Axis axis ceylonensis). Spotted deer, also known as "Chital" or "Cheetal" in India or as Axis deer to Western guests, is the main prey of leopards in Sri Lanka. Sambar deer, the favourite prey of tigers in India, is rarer in Sri Lanka and usually to big for leopards. Spotted deer occur in abundance in Yala National Park, you will see several small herds of 10 to 20 individuals during a normal half-day safari. Usually those living in herds are females and juveniles. Males have antlers and use preorbital glands near the eyes for marking territories. Spotted deer are active throughout the day. In the hot summer months and in the noon, they like to rest under shade and begin foraging in the late afternoon and again, after only a few hours of sleep, already before sunrise. When threatened by predators, they flee flee in groups, unlike other deer that disperse on alarm. 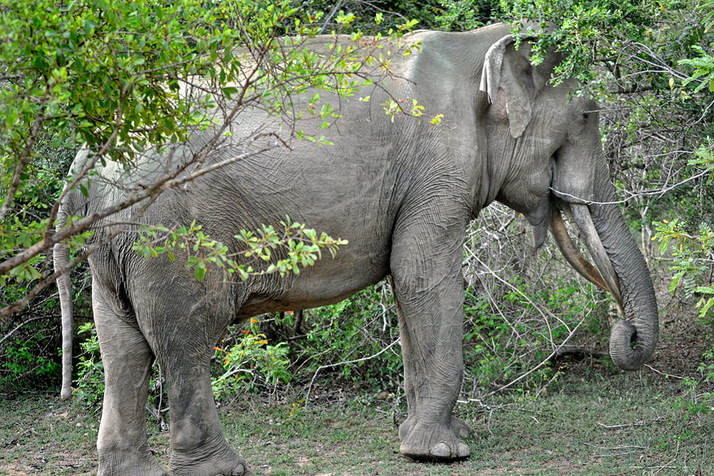 Although Yala is not Sri Lanka's number one national park for elephant safaris, elephants are a common sight in the grassland areas. Most of the females live in small groups including their offspring, whereas adult males are usually loners. Only male Asian elephants have tusks, but not all of them. About 5 to 10% of Sri Lanka's male elephants are tuskers, that's the lowest rate in the world. The tuskers of Yala block 1 are known by names. Some rangers are able to identify the individuals. The low rate of tuskers is the result of shooting during the colonial period and keeping tuskers in captivity for festival days, as only tuskers are used as elephants for pageants. 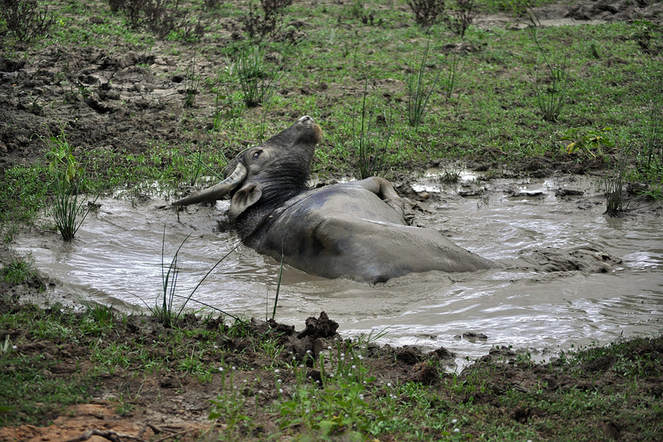 Water buffalos (Bubalus arnee), also called Asian buffalos appear to be a very common sight in Sri Lanka's wildlife areas like in those of India and Southeast Asia. Nevertheless, the species is listed as endangered in the IUCN Red List, as the remaining population of wild buffalos totals less than 4,000. However, there are many more individuals on the island of Sri Lanka. How can this be? The reason is: Sri Lanka's buffalos are not genuine wild buffalos, they are descendants of domesticated buffalos (Bubalus bubalis) who run away and mulitplied in the wilderness. Thus, the correct term for wild-living water buffalos in Yala National Park is "feral buffalos", not "wild buffalos". Feral buffalos are not endangered. Actually, almost all of remaining genuine wild buffalos live in the Indian state of Assam (about 3000). 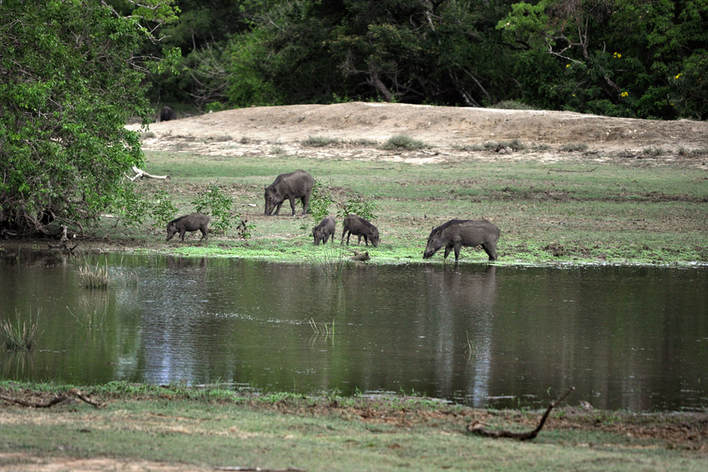 The wild boar (Sus scrofa) is native to much of Europe, North Africa and Asia. Indeed, the animal in Yala National Park is the same species as in European forests, it's one of the widest-ranging mammals of the world. The wild pig probably originated on the islands of Indonesia and the Philippines. The subspecies occuring in Sri Lanka (Sus scrofa cristatus) is known as Indian boar, one of two subspecies of South Asia, also native India, Nepal, Myanmar and the hillcountry of western Thailand. The Indian boar differs from the nominate species that is predominant in Europe by its larger skull and more spiky snout. In general, the Indian boar is taller and more sparsely haired than Europe's subspecies.

Due to the Buddhist culture that respects animal life and wellbeing, a 1964 conservation law bars the sale of any boar meat in Sri Lanka. Even boars killed legally to protect farm areas, are banned from commercial trade. Nontheless, some restaurants offer boar meat because it's popular with western tourists. But you should be aware: This is illegal in Sri Lanka and undermines cultural legacy. Proponents of abolishing the ban, however, claim that the ban has led to an explosion in the numbers of boars. Sri Lanka's wild boar population is estimate to have grown to several hundred thousand individuals. 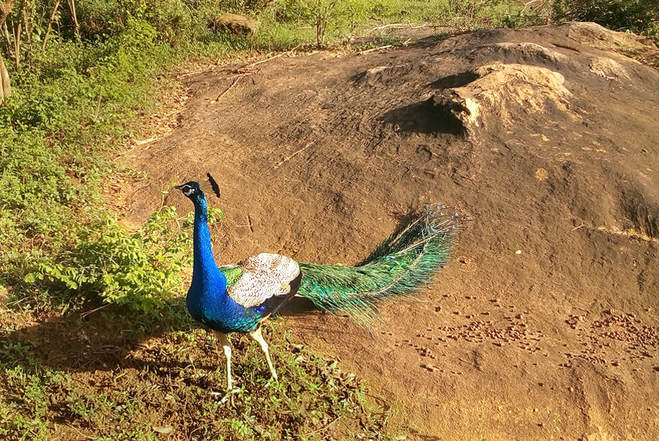 The Peacock’s, correctly spoken the "Indian Peafowl", is largest of the pheasants. The species is native to Sri Lanka and India. Actually, all peacocks of the world are desdendents of those from South Asia. Although a common bird in Sri Lanka's national parks, the population has decreased considerably in recent decades. Appreciated as a delicacy, peafowls have been hunted down by poachers. As these beautiful birds can be tamed quite easily, they were sought-after animals in ancient cultures of the Mediteranneans. Egyptian and Roman upperclass people were keen to buy this colourful animal as a kind of decorative attraction of palace gardens. In contrast, for Indians the peacock helds a religious significance as the chariot animal of Lord Skanda, who is also venerated as Kataragama by Sri Lankan Buddhists.
Why travel with Lanka Excursions Holidays?