Seenigama Muhudu Viharaya near Hikkaduwa is a temple situated in a small islet just 200 m offshore. The temple is Sinhalese Buddhist. Another temple at the shores of Seenigama, frequented by both Buddhists and Hindus, is dedicated to a local tutelary deity named Devol, who is also worshipped in Unawatuna. The god is a protector of fishermen and boats. According to localizations of Ramayana narratives, Seenigama was the place where Sugriva, helper of Lord Rama, began his campaign against the demon king Ravana of Lanka, in order to free Rama’s wife Sita from captivity. 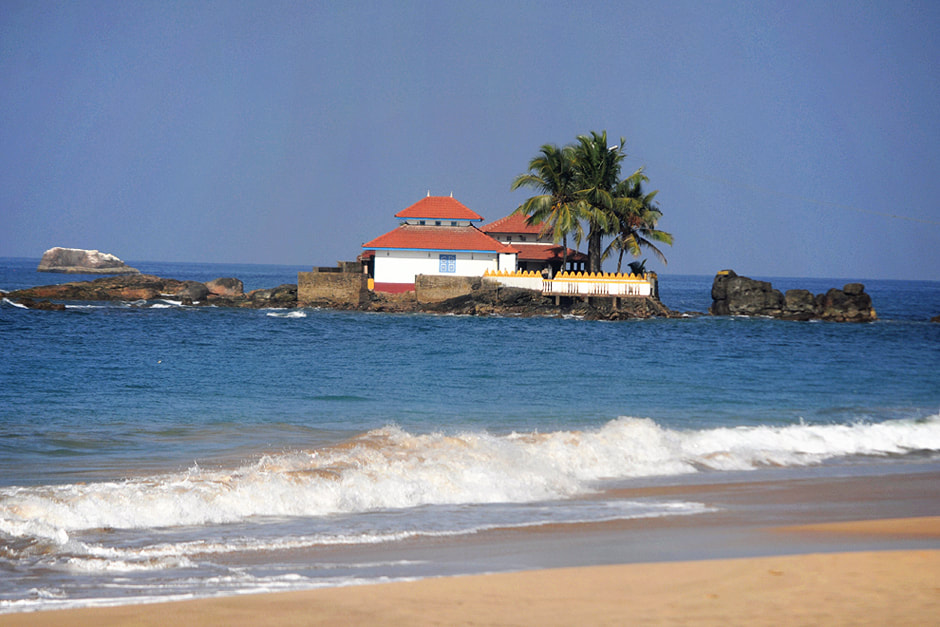 The island of the Seedigama temple lies on small rocky outcrop islet in only 200 m distance from the beach. Pilgrims can visit the temple only by taking a boat, the landing place of the island is a short flight of steps extending below normal sea level. The Seenigama island temple consists of two unpretentious buildings. They are surrounded by a wall to protect them from high waves. The Sinhalese name of the island temple is Seenigama Muhudu Viharaya. The term "Viharaya" indicates that it's a Buddhist holy place. "Muhudu" translates to "sea", "at see", or "maritime"

The close-by shrine at the beach on the mainland is known as Seenigama Sri Devol Maha Davalaya. The term "Devalaya", pronounced "Devale", literally means "gods' abode". In Sinhalese, a Devale is the sanctuary of a Hindu deity that is venerated by Buddhists, too. This is the case, as Devol Deviyo is a regional demon-like protection deities worshipped by Sinhalese particularly n the southwestern lowlands and coastal areas. He is one of the "Dolos Deviyos", the twelve highest gods of the island.


The Seenigama temples are situated only 1,3 km north of the mouth of the Hikkaduwa Lagoon. The distance to the town centre of Hikkaduwa at turtle beach is 3 km.

Fürther 800 m north from Seenigama is a so-called "Sea Turtle Hatchery & Rescue Centre, at the landside of the coastal road is the Buddhist Tsunami Honganji Viharaya.The large new Buddha statue known as Peraliya Tsunami memorial is slightly further north. It commemorates the worst railway accident in history, which was part of a much larger desaster, the 2004 Boxing Day Tsunami.