Dambulla is a dusty town located right in the middle of Sri Lanka’s so-called “Cultural Triangle”, at a crosspoint of the Colombo-Kurunegala-Trincomalee and the Kandy-Anuradhapura-Jaffna roads. The three “corners” or “angles” of the “Cutural Triangle” - namely the ancient capitals and today’s World Heritage Sites Anuradhapura, Polonnaruwa and Kandy - are all within 70 to 80 km distance from Dambulla. And Sri Lanka’s most-visited UNESCO World Heritage Site, Sigiriya, is only 15 km away from Dambulla. The Dambulla rock temple is a World Heritage Site itself, because it's undoubtedly the very best example of typical Sinhalese Buddhist cave temple richly decorated with statues and paintings. The colourful beauty of these image caves is the reason why Dambulla is a must-see for heritage travellers in Sri Lanka. Don't miss it, it will be on the way.

The Dambulla Temple is officially known as “Dambulu Len Viharaya” (“Dambulla Cave Monastery”), because of its caves, “Dambulu Raja Maha Viharaya” (“Dambulla Royal Grand Monastery”), because it was founded by a king, or “Rangiri Dambulu Viharaya“, (“Golden-Rock Dambulla Monastery”). There are are at least two reasons for the latter name, namely the gilding of statues in the Polonnaruwa period and the recently erected giant statue of a Golden Buddha just in front of the rock, where the stairway to the cave temples begins. 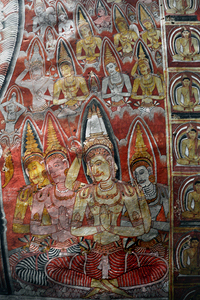 Altogether, there are more than 80 documented caves in the surrounding area of Dambulla, but the five caves behind the Golden Buddha Statue of the Golden Temple, which is located at the southern end of the town, are definitely the major attractions of Dambulla. The caves are situated at a natural terrace, in about 100 m height above the road, at the southern slope of the Dambulla rock, which reaches 160 m above sea level.

The caves entrances are behind aisles of long galleries in front of the rock. Their shining white walls are contrasting with the dark granite. The caves are decorated with 153 Buddha statues, 3 statues of Sri Lankan kings and 4 statues of gods and goddesses, and with Sri Lanka’s most exquisite ancient murals, covering an area of 2,100 square metres (23,000 square feet). They are the best example of traditional paintings in the Kandyan style, depicting scenes from the life of the Buddha, also illustrating episodes from his previous lives as described in the Jataka stories, which form a part of the Buddhist Holy Scriptures, the canon called Tipitaka in Pali (or Tripitaka in Sanskrit).

Photography is permitted inside the caves, but visitors are not allowed to take pictures of people in front of statues. This is a general rule in Sri Lanka. Furthermore, you should avoid flashlights, because it would damage the colours of these ancient paintings, which - apart from the Sigiriya frescoes - are the most valuable in Sri Lankan art history.
Please, though there can be crowds of visitors, do not behave like a tourist in an amusement park. Be aware: Dambulla is still a sacred site and many of the Sri Lankan visitors are pious pilgrims. This is a time-honoured place, it is has been inhabited by Buddhist monks since the 3rd century B.C.E. and became a royal temple already in the 2nd or 1st century B.C.E. It is believed to have been occupied by monks ever since. This is remarkable indeed, because in this case Dambulla would be one of the oldest continuously inhabited monasteries of the entire world, if not the oldest at all.

The Dambulla area is thought to be inhabited from as early as the 7th century B.C.E., since Ibbankatuwa near Dambulla was a prehistoric burial site, where human skeletons were found from centuries long before the arrival of the Sinhalese in Sri Lanka. Right from the beginning of the island’s Buddhist era, reclusive monks lived in natural rock shelters. Maybe, some of them had settled down here even before Buddhism was officially introduced by King Devanampiya Tissa in the 3rd century B.C.

The Dambulla caves are believed to have provided refuge to King Vattagamani Abhaya, known as Valagamba in Sinhala, when he had to flee from Anuradapura, after the capital of his kingdom had been sacked by Tamil invaders. Reclusive monks living in the Dambulla caves are said to have hidden and protected the king. When King Vattagamani Abhaya, after 14 years in exile, managed to regain the throne in Anuradapura, he remembered the place that once sheltered him and, out of gratitude, ordered to build a magnificent rock temple at Dambulla. Remarkably, the foundation legend mentions, that the caves had already been inhabited by monks in the early period of Vattagmani’s rule. So the sacred site seems to be even older. The rock inscription in Brahmi letters, which is placed at the drip ledge above the cave entrance, is usually ascribed to Vattagamani, but another short inscription possibly dates back to the reign of Saddha Tissa’s reign, who was Vatagamani Abhaya's father. Saddha Tissa himself was the younger brother and successor of the most famous Sinhalese king, Duttha Gamani, who ruled in the middle of the 2nd century B.C. The Brahmi characters of the first inscriptions at Dambulla may be even earlier, namely from the very beginnings of the island’s Buddhist era in the 3rd century B.C.E.

Statues in the caves are said to date back to the pre-Christian era, too. Frankly, this seems highly unlikely in case of Buddha statues, because earliest depictions of the Buddha are not known from such an early period in India. But some of the statues are from the Anradhapura period indeed, and others are from the Polonnaruwa period (10th to 12th century). However, most statues as well as the paintings are from the Kandy period, mainly from the 18th century.

Though this was a huge cave temple, historical records remain silent on Dambulla until the 11th century C.E. The Chulavamsa chronicle, a continuation of the Mahavamsa, states that King Vijayabahu, who liberated the heartland of the Sinhalese civilizaton from Chola occupation and became the first Sinhalese king of the Polonnaruwa period, carried out restoration work at Dambulla and donated villages to the incumbents of this temple.

However, most Buddha statues from the Polonnaruwa period are donations of King Nissanka Malla, who on the fourth and last of his pilgrimages exploring his kingdom also visited Dambulla. Like at many other pilgrimage places and like at many buildings in Polonnaruwa itself, Nissanka Malla left a detailed inscription praising his deeds. In this Dambulla inscription, Nissanka Malla claims to have left more than 70 statues in the caves as well as to have ordered to gild some of the Buddha images. It is from this time onwards that Dambulla is called the “Golden Temple”.

A palm leaf manuscript from the Kandyan era, called the Dambulu Vihara Tudapata, dated 1726 C.E., states that King Senarath from Kandy restored the Dambulla rock temple and that the king himself took part in a reopening ceremony.

The last and most noteworthy royal benefactor of the Dambulla cave temples is King Kirthi Sri Rajasingha in the second half of the 18th century. Though of Indian origin and born as a Hindu, he started, after becoming King of Kandy, patronizing Buddhism in many ways, leading to a Buddhist renaissance on the island. One of the many reorganized temples was Dambulla. Now it became the masterpiece of Kandyan art. Actually most of the paintings in the caves which can be seen today are from this era, as the main caves assumed their final layout during Kirthi Sri Rajasingha’s reign.

Only cave number 5 was decorated much later, and in the 1930s, the white veranda just below the dark granite of the rock, was rebuilt with some elements of the colonial style.