Namal Uyana is a temple and forest sanctuary in the Dambulla area. There are two remarkable features at this off-the-beaten-track site. Firstly, the rock is the largest roze quartz mountain in South Asia. Secondly, the forest served as an ancient asylum where lots of iron wood trees have been planted. 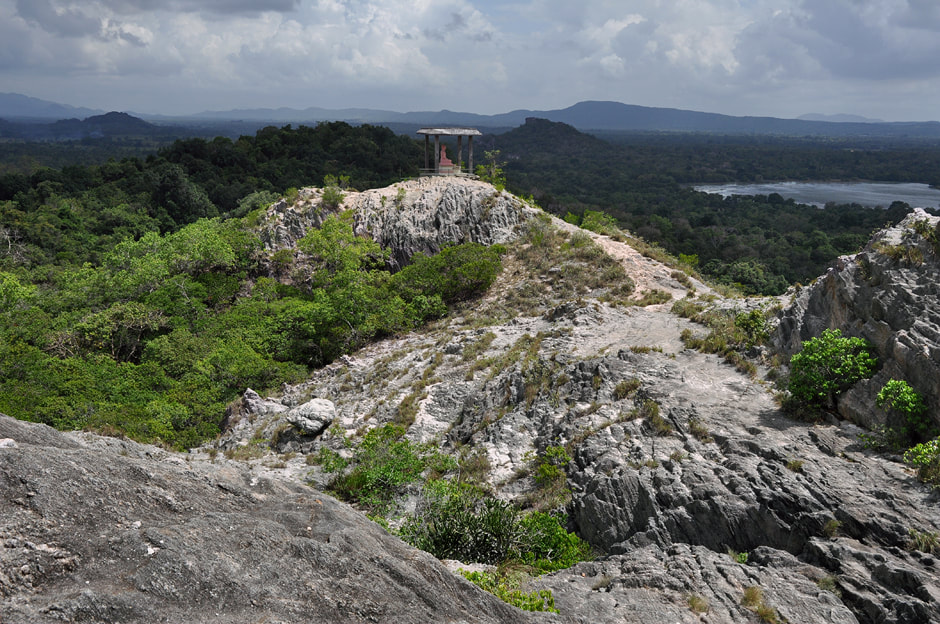 Jathika Namal Uyana is a forest situated near the villages of Ulpathagama and Galkiriyagama, 15 km northwest of Dambulla and 21 km southwest of Aukana by road. The term “Jathika” means “national” and refers to the status of a sanctuary. The forest surrounding the rose quartz mountain covers an area of about 6 square kilometers. 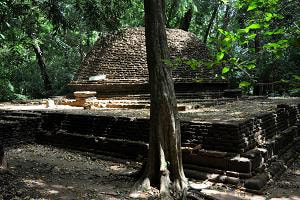 Namal Uyana is an archaeological site with ruins of ancient monastery from the Anuradhapura period. The forest is believed to have been inhabited by Buddhist monks in the earliest period of Buddhism on the island, under the reign of King Devanampiya Tissa  in the 3rd century BC. However, the ruins of a stupa named Purana Namal Seya and an ancient Bodhigara, a classical tree temple, are from second half of the first millennium AD. King Dappula, who reigned in Anuradhapura in the 7th century, declared the forest of Namal Uyana an asylum. Anyone fleeing enemies or even criminal punishment legally ordered by the king was entitled to sanctuary in this remote forest of Namal Uyana, under the condition of respecting the rule and jurisdiction of the Buddhist monks living here.

Legend has it that the outlaws seeking asylum in Namal Uyana were miraculously transformed into Na trees, “Na” or “Naa” being the Sinhala name of ironwood. Actually, the asylum seekers seemed to have played a crucial role in developing this iron wood. They could have been obliged by the monks to plant the sacred trees and care for them. The present Na trees of Jathika Namal Uyanas are several hundred years old, though almost certainly not from the Anuradhapura period. The ironwood planting seems to have continued throughout the medieval period. A comparatively orderly formation of the forest indicates it was a human plantation. The replanted ironwood forest is over 100 hectares in extent.

Ironwood (Mesua ferrea) is the iconic and emblematic precious timber of Sri Lanka. It’s native to Sri Lanka, India, Malaysia, Myanmar, Thailand, and Indonesia. In Nepal, ironwood occurs in heights up to 1500 m above main sea level. However, the best altitudes are about 400 m and the best quality of ironwood is found in Sri Lanka, where the density of this species is highest among all tropical countries of Asia. Ironwood occurs mainly at the slopes of the foothills of Sri Lanka’s hillcountry. Large amounts of Na trees are rarely seen in the dry zone plains, Namal Uyana being the remakrable exception, indicating the human activity mentioned above. The Na tree is sacred in Sri Lanka. According to the beliefs of many Sinhalese Buddhists, the next Buddha, Metteyya (known as Maitreya in Sanskrit and Maithri in Sinhala), will find enlightenment under a Na tree. The durable ironwood is traditionally used in Sri Lanka’s sacred architecture, for Buddhist and Hindu shrines alike, even for mosques and churches. It’s still a common practice to plant Na trees near holy places, in order to serve future generations. This is why the legend of a large ancient Na tree plantation in Nama Uyana has some credibility.

The leaf colours of ironwood are changing, but not in the course of annual seasons. Rather the colours indicate the age if the tree. Young Naa treed have reddish leafs, whereas older ones are darker green. All parts of the Na tree, particularly roots, flowers and leafs, are  used in Sri Lanka’s Ayurvedic medicine, for example for stopping bleedings.

Altogether, Jathika Namal Uyana has 102 species of tropical plants, including 72 species of herbal plants used in Ayurvedic treatments. One reason for the richness in species that are otherwise rare in Sri Lanka’s dry zone is the availability of fresh water throughout the year. Though some springs contribute to water water supply only seasonally, fresh water flows from one rich permanent spring at the rose quartz and diverts into various directions inside the forest. That’s why both dry zone and wet zone species occur in Jathika Namal Uyana.

75 species of ants and all Sri Lanka species of snakes are said to inhabit the forest of Namal Uyana. One lizard species is endemic.

In the late 20th century, Venerable Wanawasi Rahula Thera, a Buddhist monk settled down in Namal Uyana to live an undisturbed life in meditation. During his first year, he inhabited a little tree-house, Afterwars, he moved into a humble hermitage made of cheap wood. Becoming the chief monk of a small forest hermitage, he became a guardian of the forest and its animals, which, besides meditation, has been a second aim of traditional Sri Lankan forest monks since antiquity. Venerable Wanawasi Rahula Thera believes he played the same role in one of his previous incarnations. When the monk arrived, the forest was threatened by illegal logging and sections were burnt down by traditional chena cultivation. In order to protect the environs and the sacred place, he engaged in another activity, that had been a typical task of Buddhist monks in antiquity. Instead of threatening them with prohibitions and prosecutions, he engaged in environmental education of people living the surrounding villagers, offering them eco-friendly alternative solutions to improve their livelihood.Venerable Wanawasi Rahula Thera was honoured for his successful efforts by several national and international rewards. 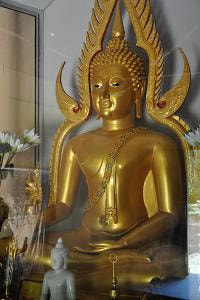 Thanks to the monk’s conservation efforts, the government declared Namal Uyana an archaeological reserve in 2001. Two years later, the Namal Uyana Trust was established, receiving donations for the conservation projects by uplifting the living condition of the villagers and to open  an Environmental Research Centre. On 8 May 2005 then Prime Minister and later President Mahinda Rajapaksa declared the forest a National Reserve.

That Jathika Namal Uyana is held in high esteem, is also indicated by donations from foreign Buddhists. One seated Buddha in the Siamese style can be seen in a new shrine, it was donated by pilgrims from Thailand.