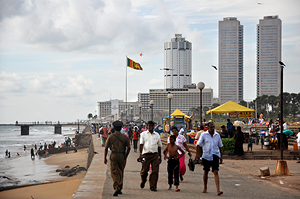 Galle Face Green in Colombo
To be honest, Sri Lanka, despite this islands wide range of attractions, can not at all claim to be Asia's number 1 holiday destination for city tours. There is only one agglomerate with more than 200.000 inhabitants in Sri Lanka, Colombo. But Colombo can not really compete with Delhi or Beijing regarding cultural significance nor with Singapore or Tokyo concerning modern urbanity or with Bangkok's or Mumbai's nightlife. Actually, those travellers looking for beach relaxation or nature experience or heritage exploration will be well-advised to avoid the noisy, dusty, grey traffic jam that likes to be called Colombo. However, some travellers simply don't like to ignore the capital of a small country during their two-weeks visit. Though Sri Lanka's real attractions are to be found far beyond Colombo, there is indeed something to discover in the capital, too, for those who have time enough or are unstoppably curious.

Nelum Pokuna Mahinda Rajapaksa Theatre in Colombo
​Apart from Colombo and its suburbs, which are separate municipalities (Dehiwala, Moratuwa and Kotte are the second, third and fourth largest respectively), there are only 8 cities with about 100,000 inhabitants, namely Negombo, Kandy, Kalmunai, Vavuniya, Galle, Trincomalee and Batticaloa. Of these only Kandy in the hill country and Galle at the southern coast are worth mentioning for their urban lifestyle. Both Kandy and Galle are not only World Heritage Sites but also centres of cultural and educational and entertainment and leisure activities in today's Sri Lanka, not to mention that they hold, besides Colombo, the largest cricket stadiums of this cricket-obsessed nation. However, there is definitely one more place worth mentioning for its urban cultural events and festival activities, namely Nuwara Eliya, the stamping ground for bohemians in April, and also, besides Kandy and again Colombo, the best golf destination on the island throughout the year. 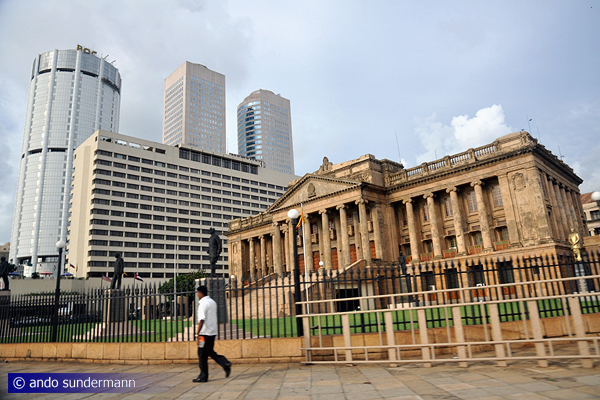 As the commercial hub of the island, Colombo has the largest variety of hotels in Sri Lanka, particular at the higher end of the scale. Though somewhat faceless, Colombo has some places worth a visit. Here is a list: the busy Pettah Markets with streets crowded with coolis and a Dutch colonial Museum of surprising oasis of tranquility, the National Museum as one of the most important exhibtitions of ancient Buddhist art; the renowned Kelaniya temple with ambitious tradtional paintings; the Nelum Pokuna Theatre being a masterpiece of modern architecture, the seaside promenade Galle Face Green as a weekend meeting place; Beira Lake with the Seema Malakaya, a masterpiece of unpretentious modern temple inspired by local traditional architecture; the classicistic ensemble of  Independence Square and Independence Hall; the beautiful garden of Dehiwala Zoo; the colonial flair of the beach resort Mount Lavinia. 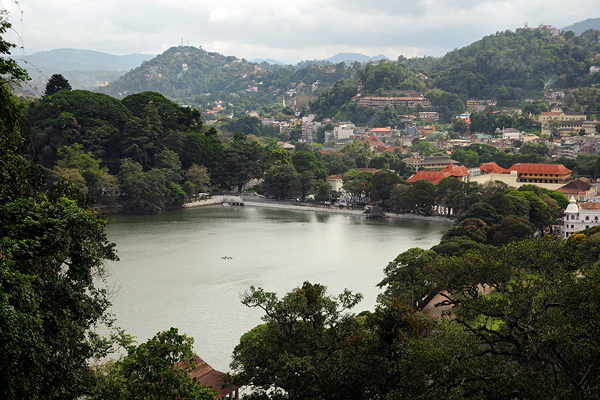 Situated amidst green hills, looped by the large Mahaweli river, Kandy likes to be called the hill-country capital. Kandy is proud to have been a safe haven for traditional Sinhalese culture for another three centuries after the arrival of the Portuguese invaders. Kandy is a tiny but bustling city. "Kandy peak season" is the Esala Perahera, a festival fortnight in August, with Asia's largest and most traditional Buddhist pageanta. Throughout the year, pooja ceremonies at the Tooth Temple are impressive for foreign vsitors, too. Close to the Tooth Temple, cultural shows with Kandyan dancing are performed every evening. Kandy is a first address for shopping, gems of guaranteed quality, wood carvings and batiks and other cloth are reasonably priced. The suburb Peradeniya is a university town with one of the most significant Botanical Gardens in the tropics. By the way, Kandy is a good birdwatching area, too. 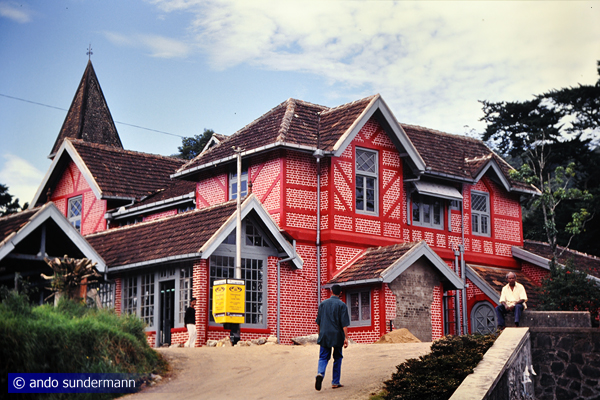 Nuwara Eliyya sprawls over a valley flanked by Sri Lanka's highest mountain, Pidurutalagala, and the easily accessible Single Tree Mountain. This central part of the Sri Lanka's highland is shrouded in legends, as a setting of the Indian Ramayana epic. Nuwara Eliya likes to be called "Little England" due to the colonial flair of a former British hill station. The city was founded by no one less than Samuel Baker, the explorer of the river Nile. Due to its cool climate at an altitude of almost 2000 m, the valley of Nuwara Eliya was ideal for growing vegetables the British knew from their homeland. Nuwara Eliya soon became a sanctuary of British civil servants in Ceylon. British high society spent their leisure hunting and plying polo, golf and cricket.  The quarter encompassing the 18 hole golf course is scattered with Victorian-style villas, bungalows, guesthouses and even hotels that are timber-framed. More about Nuwara Eliya... 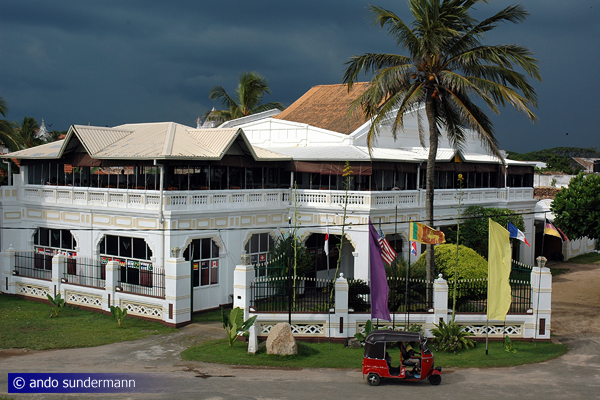 Galle is the administrational and cultural capital of Sri Lanka's Southern Province. The Dutch Fort of Galle is a World Heritage Site. Within the Galle Fort, there are two different Museums. The Galle National Museum is housed in a colonial residence. The Galle Maritime Museum is a former warehouse. Galle Fort also offers exquisite shopping opportunities to purchase Antique furniture particularly from the Dutch period. The colonial ambiente is the reason why Galle offers a offers a range of stylish hotels, such as boutique hotels, refurbished colonial bungalows, luxurious villas and the 5-star Amangalla within the fort. The 4-star hotel Jetwing Lighthouse at a beach to the west is a masterpiece of Sri Lanka’s renowned classical modern architect, Geoffrey Bawa. Recently it became a starting point for whale watching tours. Galle is surrounded by the island's largest cinnamon plantation area. 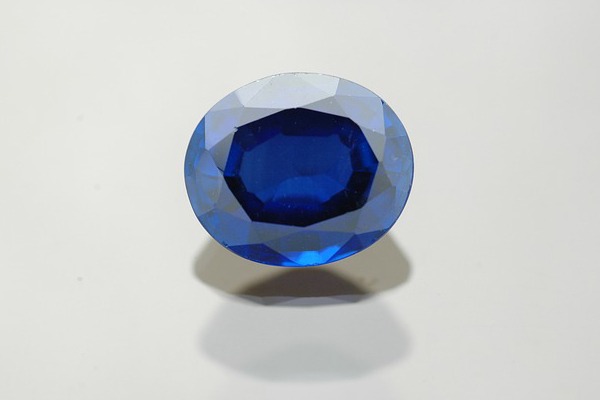 "Ratnapura" sinple means "gem city". And that's what Ratnapura is. The surroundings are spotted with gem mines. An extraordinary variety of semi-precious stone can be found in this area. Particularly Ratnapura's sapphires of all colours are highly appreciated around the world, so much, that fake certificates usually pretend sapphires from other countries to be from Ratnapura, because Ratnapura has been the preferred source of sapphires since antiquity. The world’s two most famous blue sapphires are from Ratnapura, the "Blue Bell" in the British crown and the "Star of India", which is on exhibit in the Museum of Natural History in New York. Some gem pits, privately owned small mines, can be visited in the vicinity of Ratnapura. The art of jewellery making can be studies in Ratnapura city. The Ratnapura National Museum displays ancient historic artifacts provides information about the history of Ratnapura’s gem industry. 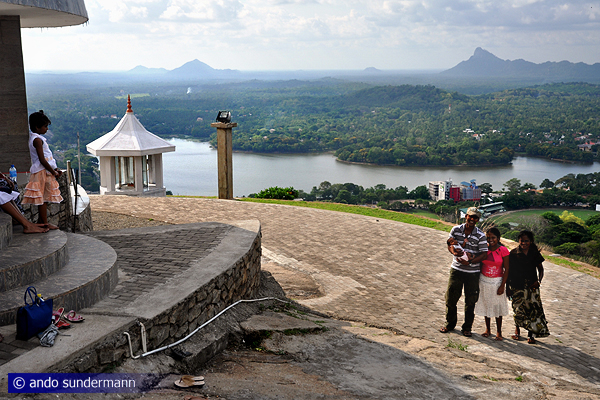 Kurunegala, capital city of the North Western Province, lies at a cross point of several main roads of Sri Lanka. Kurunegala was the island's capital in the late 13th and early 14th century, when a royal citadel was placed atop Kurunegala's landmark rock, the Ethagala, which reaches a height of 325 metres. The meaning of this name is "elephant rock".  It is named after its form resembling an elephant. The name "Kurunegala" itself is derived from this rock, since "Kuruna" means "tusker". A decade ago, a new 27 m (88 ft) giant statue of a seated Buddha was constructed at the western slope of the Ethagala. It's a perfect panoramic viewpoint overlooking the plains, which are covered with coconut trees, as Kurunagala District is the centre of the island's coconut production in huge estates. Inside town, there is an interesting Muslim shrine for a prince who became the town's guardian spirit.