Sigiriya Lion Rock
Sigiriya, Sri Lanka’s must-see heritage attraction, is one of the most exciting and inspiring ancient places in Asia, combining natural beauty and historical significance. Astonishing every visitor with its outstanding works of art and engineering achievements and magnificent views, Sigiriya likes to be called “eigth wonder of the world”. A tragic history of patricidal coup d’etat and fratricidal war suits Sigiriya’s dramatic setting. It was a new kind of sacred site and royal palace and fortress and entire capital city built in 5th century C.E. by King Kassapa, after he left Anuradhapura in fear of revenge of his half-brother Moggallana, the rightful heir to the throne, for occupying the throne after killing their father, the meritourious King Dhatusena. In less than two decades a new city of unique layout and symbolism was created to safeguard and legitimize the reign of the new king. Many surprisingly unparalleled features of this UNESCO World Heritage Site are thrilling visitors from Sri Lanka and all over the world: the symmetry of the landscape garden with ancient fountains still in function, the extraordinary grace of representations of women in the murals called “Sigiriya frescoes”, the first known examples of Sinhalese poetry engraved in walls, the remnants of a lion sculpture that once was Sri Lanka’s largest statue at all, last not least the spectacular location of the ruins on the summit of the isolated rock. 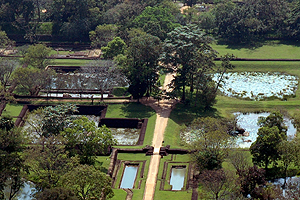 Sigiriya Water Gardens in Char Bagh order
Visiting Sigiriya takes at least three or four hours. Starting point is the western gate of the citadel. Crossing the moat of this best-preserved ancient fortress of the island, which is a perfect rectangle of 800 metres width and 1200 metres length, you should be aware, that you are entering only the royal core of the city that onyce stretched far into western direction. This overgrown settlement area outside the “city walls” was the founding place of more foreign coins than any other place in the Cultural Triangle, indicating the importance of Sigiriya as an international trade centre in antiquity. Entering the citadel, with the landmark view to the steep Sigiriya rock, you are entering the so-called water garden with an axial passage and symmetrical arranged bassins similar to much earlier Persian and much later Moghul garden architecture but unprecedented in South Asia those days. There are artificial fountains that can still be seen during the local wet season. 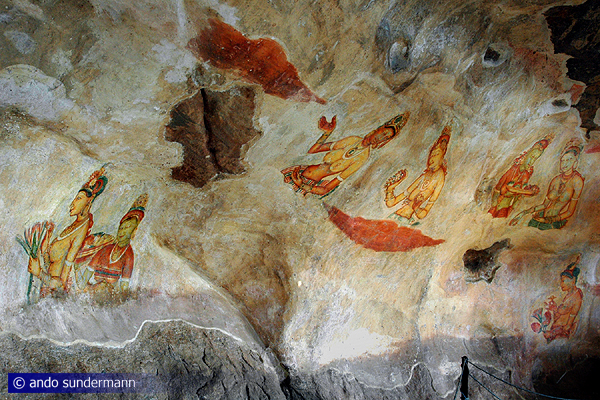 Fresco Pocket "Deraniyagala Cave" at the Sigiriya Rock
At the foot of the Sigirya Lion Rock is a labyrinthic so-called boulder garden, a natural landscape garden contemporary to early examples of Chinese lanscape gardens. This part of the royal pleasure garden is dotted with rock shelter in which remnants of an even earlier history can be seen: Before becoming the capital of King Kassapa, Sigiriya had aready served as the abode of Buddhist monks. Climbing the ancient stairways, you will reach a second ticket checkpoint at the foot of two modern circular staircases, which are enabling you to reach the rock shelter high above ground level, where some of the original “Sigirya frescoes” from the fifth century survived, the so called “cloud maidens”. The fascinating beauty of these paintings inspired visitors already more than 1000 years ago to praise them in small poems spontanuously inscribed on the plaster of an ancient wall protecting the aisle running along the rock in about 80 metres above ground level and 80 metres below the top level. These earliest examples of writings in Sinhala are called “Sigiriya graffity” and the brightly plastered wall, which was once polished and reflecting the light, is known as the “Mirror wall”. It ends at the foot of the lion paws, which belong to a once colossal lion sculpture made of brick that covered the entire northern end of the Sigiriya monadnock, which is therefore called the “Lion Rock”. Walking through the Lion paws you reach the final part of the ascent to to top, knowadays secured by iron railings. The very top of the Sigiriya Lion Rock is covered with foundations of brick monuments on different levels. The ancient structure, presumably the palace of King Kassapa, appears like a ship high above the surrounding plains, offering you a perfect 360-degree panoramic view to the area now called “Sri Lanka’s Cultural Trinagle”, which was once the heartland of the ancient Sinhalese civilization.

Sigiriya is one of the most elaborate surviving ancient urban sites in South Asia, systematically planned and worked out on a huge scale. All the more surprising is: Historians came to no undisputable conclusions about the reason for founding it nor its abandonement nor its religious symbolism. Sigiriya indeed remains to by a mystery.

It’s likely but not proven, that the rock shelters at Sigiriya Rock, like those of the neighbouring Pidurangala Rock and Aligala cave, were inhabited already in prehistoric times, 5000 years ago. Archaeological findings have revealed that Buddhist monks occupied the rock shelters at Sigiriya already in the earliest period of Buddhism in Sri Lanka, starting in the 3rd century BC. Some rock inscriptions, which can be dates as far back as to this early Buddhist period, state that the caves were donated to the Buddhist Sangha.

The impressive fortress and palaxe and garden architecture, remnants of which are today’s World Heritage Site Sigiriya, are from fifth century C.E. They were built in the beginning of the rule of the Moriyan dynasty. The second part of the Mahavamsa Chronicle, sometimes called Culavamsa tells the story of the “Lion Rock” (Sihagiri) at the end of the 38th and begin of the 39th chapter. According to this record, stemming from much later centuries, Sigiriya would have been built and served as the capital during the reign of one single king, Kassapa I., for a period of only 18 years. However, historians doubt that this is a fully accurate account, because the Sigiriya story (see below) has obviously a very dramatic composition and is told like a teaching play about the bad effects of emotions like grudge and anger and lack of seld-control according to the law of Karma. It seems unlikely, that an entire city which lasted less than two decades could have left so many traces of a commercial hub. There is no other place in Sri Lanka, where more coins have been found than in Sigiriya. By far the most of them were of Roman or Indo-Roman origin. This does not necesarrily mean, they were payments of foreign traders. It seems more likely, that Sri Lanka simply used those international bronze coins as its own currency those days. Nevertheless, Sigiriya was obviously more than a fortress of a paranoic king, it was an urban settlement. Furthermore, there is little archaeological evidence, that the constructions on the summit of Sigiriya rock are any kind of palace. Likewise, it could have been sacred architecture, ignored by the chronicle because belonging to a Mahayanist or another kind of religious tradition that was considered heretic by the chroniclers. There are strong indications, that the entire “Lion Rock” was designed as a religious symbol representing the mountain abode of Lord Kuvera. However, this does not contradict the traditional theory that Sigiriya was a royal palace, because in this case the religious connotation could simply indicate that a ruler tried to be heightened to a godking status. Besides the chronicle’s report of Sigiriya-founder Kassapa killing his father and committing suicide in the battle against his brother, there are many versions of the Kassapa story told in folk legends. Alternative stories have King Dhatusena as the initial builder of Sigiriya, with Kassapa only finalizing the work in honour of his father. Other stories depict Kassapa as a playboy king using Sigiriya as his pleasure palace. Instead of suicide on the battlefield, the reason for his death is poisoning on order of a concubine.

There can be no doubt that Sigiriya was left completely and fell into decay already during the Anuradhapura period. It was reoccupied be reclusive Buddhist monks who then again lived in the rock shelters at the foot of the rock. The beauty of the abandoned Sigiriya rock itself nevertheless attracted visitors already in the late Anuradhapura period. The evidence for it is the “Sigiriya graffity” left by those early travellers, written in the 8th till 14th century.

In 1831, the British Major Jonathan Forbes climbed the summit of Sigiriya and rediscovered the impressive ruins, which then were completely overgrown. Archaeological research in Sigiriya began in the late 19th century. H.C.P. Bell, Archaeological Commisioner of British Ceylon, was the first scientist to conduct extensive research on Sigiriya. It was the last Archaeological Commisioner of British Ceylon and the first after independence, Senarath Paranavitana, the doyen of archeology and epigraphy in Sri Lanka, who contributed most to the research and interpretation of Sigiriya. In particular, he deciphered and published the poem called “Sigiriya graffiti”.

view from Pidurangala to Sigiriya Rock

Story of Sigirya - the famous tragedy of King Kassapa

Prince Kassapa (the Sanskrit equivalent of this Pali name is "Kashyapa") was the elder of two brothers. But he was not the heir to the throne, because he was born to a concubine, whereas his younger brother, Moggallana, was the son of the royal consort. Kassapa harboured a jealousy towards his half-brother Moggallana.

Kassapa secretly conspired with Dathusena’s general, Migara, who was furious, because King Dhatusena had treated his daughter in cruel way. Migara whispered to Kassapa, that his father, the king, would be hiding a treasure and planning to give ir only to Mogallana. This enraged Kassapa, he carried out a palace coup, in 479 he overthrew Dhatusena and held him in captivity. When Kassapa sent messengers to his father to ask him where he was hiding his treasures, Dhatusena was answering at the Kalawewa, the huge tank that had been constructed by the old king for irrigation purposes. Dhatusena pointed to the lake he had created and said: "This is my entire treasure". Hearing this, Kassapa got furious and killed his father by wallling him up alive. Kassapa's brother Mogallana, fearing for his life, fled to India.

Like many other usurpers, Kassapa became a paranoid ruler. He lived in constant fear, his brother could return to the island and claim rightfully his throne. Because the Buddhist monks in Anuradhapura were hostile to the usurper and out of fear, Kassapa decided to shift his captal from Anuradhapura to a much a place further south, which was farer away from the shores of the island and easily to defend. That's the reason why Kassapa chose the steepest single rock of Sri Lanka as his new residence and fortified the entire rock. Sigiriya became the strongest fortification of ancient Sri Lanka. Astonishingly, the construction work for this new capital lasted only several years.

In 497, Mogallana returned from southern India with an army of Tamil mercenaries. When Moggallana advanced towards Sigiriya, Kassapa left his fortress atop his elephant and personally led his army against that of his brother. On the battlefield, Kassapa's elephant came to a muddy soil, the animal hesitated and backed up. But when his own troups saw Kassapa backtracking, they wrongly assumed that he was signalling retreat. Withdrawing from the battlefield, the army left behind Kassapa alone. Now finding himself surrounded by his enemies, the unfortunate Kassapa raised his own sword and brought it down into his belly. So the life of the patricidal king came to a tragic end and the short period of Sigiriya as Sri Lanka’s capital was over, too, because the new king, Mogallana, chose Anuradhapura as his residence again.

Panoramic view - from the Sigiriya Rock