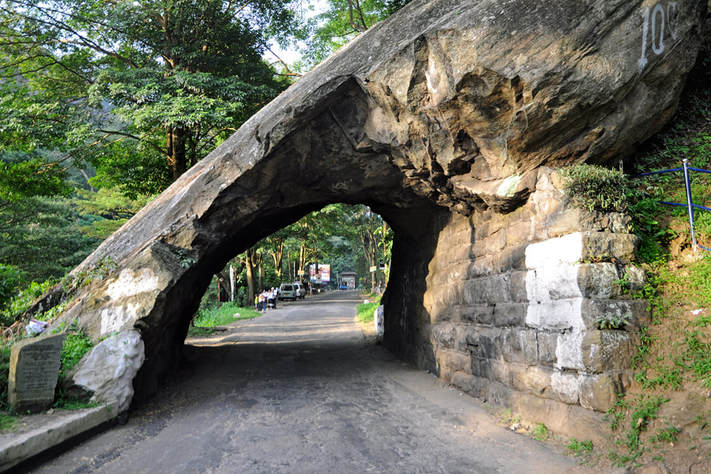 Kadugannawa is the name of the pass between the Kegalle valley and the Kandy valley. Traditionally, this pass was the main access to Kandy for invaders approaching from Colombo. Several battle took place in the suroundings. Whenever foreign troups managed to conquer Kandy, the Sinhalese successfully started a guerilla warfare against the supply line running along Kadugannawa. The British were the first foreign power to occupy Kandy permanently. In order to secure access, they constructed a road from Colombo to Kandy. Remarkably, they pierced a rock at the Kadugannawa Pass instead of blasting it away or simply baypassing it, as the new road does. An explanation is, that this Kadugannawa tunnel was a symbol. The tunnel is said to have been created to fulfill an old Sinhalese prophecy that there is no way to foreigners to rule Kandy, unless they pierce the mountains. Thus, the British went out of their way to include a tunnel on the road. Regrettably, this nice story is disputed, as the Kurunegala tunnel is claimed to have been constructed earlier (in 1823) to fulfill the prophetic saying. The road crossing Kaduganawa pass was designed be the British engineer W. F. Davidson, who died in 1829, before the Kadugannawa pass road was completed. At the highest point of the pass a memorial column known as Captain Dawson Tower was erected by the British administration a few years later on.

A car park near the tunnel is a lovely vantage point. Enjoying the vistas to the Kegalle valley of the river Maha Oya, you can spot the prominent inselberg known as Bible Rock to the west.