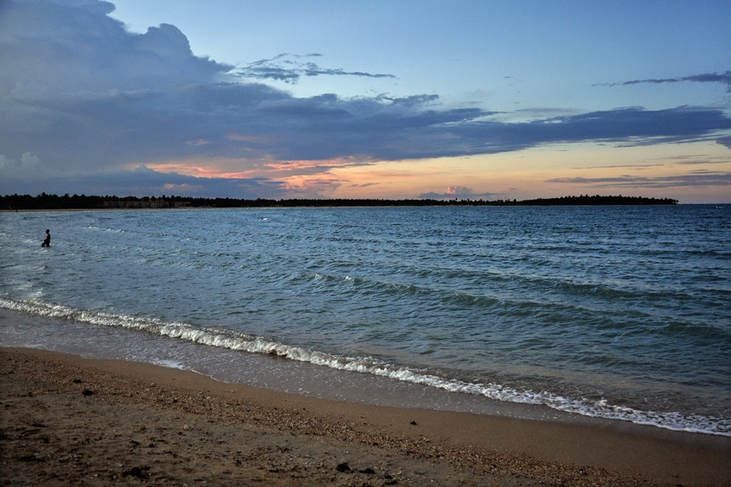 Pasikuda to the north of Batticaloa has become the most important beach resort at Sri Lanka’s East Coast. After the end of the civil war in 2009, Pasikudah was developed into a very new destination for foreigners who prefer relaxing beach holidays in comfortable mid-class hotels of the 3-star or 4-star category. In contrast to the southwest coast, which is dry and sunny during the local peak season between Christmas and Easter but wet during the northern hemisphere summer months due to the monsoon climate, the East Coast with its anti-monsoon climate is perfect for summer holidays. Pasikudah Beach is perfect for such a tourism development project, because it is the safe for swimming, suitable for families with children, as the bay is protected by a reef and the water is shallow. Actually, people can walk kilometers into the sea without losing ground below their feet. The sea is calm and not deeper than 1 meter in Pasikudah Bay.
Pasikuda is situated at the crescent-shaped cove of the same name,  whereas the nearby Kalkuda Beach is at the open sea. Pasikuda is one of the three most touristic beaches along Sri Lanka's East Coast. While Nilaveli near Trincomalee is a much longer and wider sandy beach and famous for boat excursions (Pigeon Island coral banks, Sinnakarachchi Lagoon, Trincomalee whale watching) and Arugam Bay and surroundings is most popular with surfers, Pasikuda is a destination for family holidays in the first place, viz. due to the lack of underwater currents in its shallow reef, which by the way is one of the largest in the world, allowing to walk several kilometers into the ocean. Along the East Coast, Pasikuda has the most four- and five-star hotels.

The Tamil name "Pasikudah" is pronounced with a long "a" and a double-"k", it's said to translate to "Green-Algae-Bay". The most important temple is Hindu, devoted to the female deity known as Mariamman. She is held in high esteem as the mother goddess among Tamils in India and Sri Lanka alike and considered to be  bringing rains and curing pox.

The nearest attraction is Thoppigala (Kudumpimalai in Tamil or Baron's Cap in English) 25 km to the west, a spectacular monadnock which can be climbed easily. The nearest sigificant town is Batticaloa 30 km to the south of Pasikuda.