Historically, Mirissa is one of the largest fishing ports at Sri Lanka‘s south coast, known for tuna, also for mullet, snapper and butterfish. But tourism has become the main source of income now. After Hikkaduwa had become too mainstream and Unawatuna too crowded, Mirissa became a new favourite destination of backpackers. The first tourist accommodation was built as late as 1980. Mirissa is still unspoilt, in comparison to the two beaches just mentioned. Modest guesthouses in the shadow of palm trees are predominant, large hotel complexes are still absent. However, similar to both other young people‘s party beaches in the south and southwest of Sri Lanka, Mirissa can be quite noisy all night long, particularly on weekends. If you're looking for solitude, Mirissa is less recommandable. 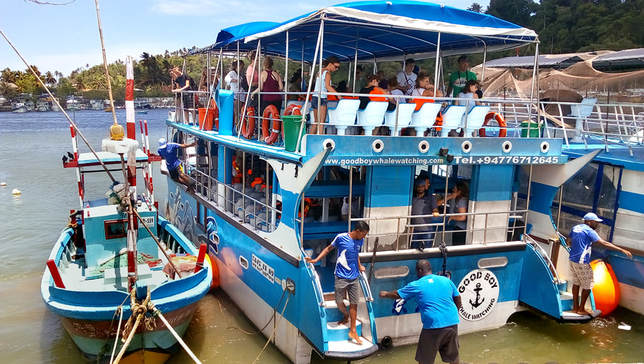 Mirissa's beach and night life has attracted plenty of independent travellers for two decades. But recently, it has developed into Sri Lanka’s leading whale-watching destination. Opinions differ, whether whalewatching in Sri Lanka is as spectacular as in arctic regions, Vancouver Island, Florida, Mexico‘s Baja California or South Africa. However, there are two reasons to consider Sri Lanka‘s whalewatching adventure of Mirissa highly enticing. Firstly, it is probably the only place where you have chances to spot both blue whales and sperm whales on the same tour. Fin whales, Bryde´s whales, dolphins and sometimes orcas also occur. Secondly, the blue whale population near the southern coast of Sri Lanka is exceptional in one respect: It is not migratory. The reason for this uncommon behaviour is the richness of krill all year long. Krill thrives at the bottom of the ocean in thousands of meters depth, too deep for whales to feed there. But the upward currents from the south along the south coast of Sri Lanka are steady throughout the year and provide a permant supply of blue whales favourite food quite close to the shore. Nevertheless, due to seasonal weather conditions, the sea becomes too rough after April. The best period to watch whales is from the of November till March, the touristic high season in this part of Sri Lanka. Mirissa‘s „peak whalewatching season“ with very good chances to sight plenty of whales is usually during the Easter Holidays.

The headland of Mirissa Beach is called „parrot rock“ and can be climbed at low tide. The western half of the beach, closer to this promontory, is comparatively safe for swimming, There are also snorkelling and other watersport opportunities. For beginners, Mirissa Beach is a also very good spot to enjoy surfing in Sri Lanka. It would turn out to be less exciting for advanced surfers. Mirissa‘s advantages for beginners are: It‘s not as crowded as the more famous surfing destinations Arugam Bay and Hikkaduwa and the bottom is sandy. Both advantages are reasons why surfing safer than in Hikkaduwa. Disadvantage of Mirissa is: There are less surf classes than in Hikkaduwa. Surfing season in Mirissa is the local main season, from October to April, similar to Hikkaduwa 60 km further east.

After the southern expressway has been finalized, the drive from Colombo International Airport to Mirissa takes only three hours - unless there is a traffic jam on the highway, what can occur in the Colombo area.