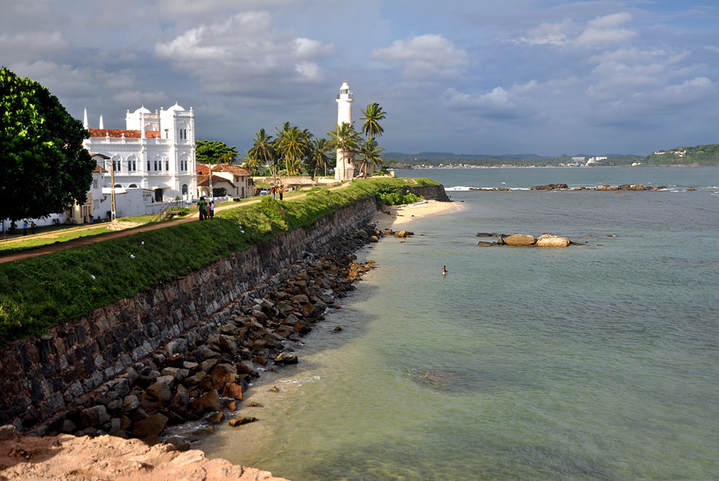 Meera Mosque and Galle Lighthouse on Point Utrecht Point bastion, seen from Flag Rock bastion
Galle is one of the few natural harbours in the south and west of Sri Lanka and has therefore been an important hub of trade since antiquity. During the medieval period, when Muslim seafarers dominated the trade in the Indian Ocean, the city then known as "Qali" was visited by Ibn Batuta, the most famous Muslim traveller. Marco Polo is said to have been in Galle, too. When the Portuguese arrived in Sri Lanka, they soon occupied Galle, its harbour was second only to Colombo. The Portuguese fortified a  quarter for their garrison on the peninsula protecting the harbour in 1588. However, the fortifications that can be seen today are mainly from the Dutch period, which began with the battle known as “Siege of Galle”, which took place in 1640. In contrast to most other Dutch Forts in Sri Lanka such as  in Trincomalee, Jaffna or Mannar, Galle was not just a fort of a Dutch garrison but an entire fortified city covering 36 hectares, the city walls of which have been well preserved till the resent day. This is why it has been inscribed as “Old Town of Galle and its Fortifications” in the World Heritage List (No. 451). The UNESCO report say: “It is the best example of a fortified city built by Europeans in South and South-East Asia, showing the interaction between European architectural styles and South Asian traditions.” The outline of the fort with its bastions and ramparts and the checkerboard groundplan of streets is typical of fortified cities in early modern Europe, whereas construction techniques show influences of Sri Lankan masonry. Pillared verandahs of houses are remnants of both Dutch and British colonial styles and local traditions.

The name “Galle” is most probably derived from the Sinhala word “Gala” for “rock”. However, the Portuguese interpreted it is “Galo”, their term for “cock”. The cock is still the heraldic animal of the city of Galle and can be seen at the Dutch city gate, which lies a little bit hidden to the east, as ths original entrance gateway to the fortress at the harbour side of the peninsula was protected by ramparts on the land side. It still bears the carved insignia of the Dutch East India Company, "VOC", and the date "ANNO MDCL XIX".

Today’s main gate is from the British period. In 1897, it was built at the northern rampart between sun and moon bastions in to facilitate easy flow of traffic. The clocktower crowning the moon bastion close to the new main gate was erected in 1883 toin honour of Queen Victoria. There are altogether 14 bastions, sun and moon and star bastions at the land side of the peninsula being the largest ones. 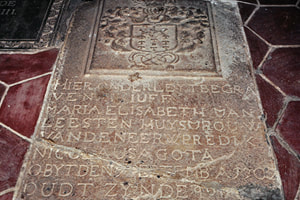 Dutch gravestone in Groote Kerk
Soon after occupying the area, the conquerers built a Dutch Reformed Church called  “Groote Kerk”, in the twon centre. I was remodeled in a baroque style in the mid 18th century. The Groote Kerk is the oldest surviving church building in Sri Lanka. The church is paved with grave stones with Dutch inscriptions.Some more gravestones with inscribed Dutch names can be seen in the small churchyard.

The Meera Mosque from 1904 resembles a colonial church, it’s recognizable as mosque only due to the crescent instead of a cross. Close to Meera Mosque, on Point Utrecht Bastion, is the 18 metres high Galle Lighthouse from 1938. 200 m further west is the southernmost point of the city walls. It’s named Flag Rock Bastion, as it was used as a signaling station to warn ships entering the port of the hazardous rocky stretches of the bay.

Today, the fort area is occupied by many artists and writers. Museums and antique shops in the Old City of Galle display artefacts from the city’s colonial past. For travellers seeking a genuine stylish ambiente, there are several boutique-style accommodation in former colonial villas affectionately restored.