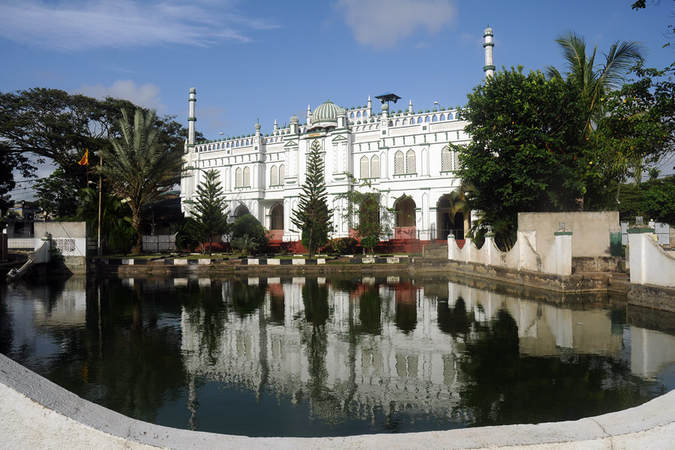 Beruwela is well-known as the cultural centre of Sri Lanka’s Muslim minority, which continues to be called “Moors”, although this is a colonial name used originally for Spanish and Maroccan Muslims in particular. Another term for Muslims from this western part of the Arabian empires was “Berbers”, due to the ethnic group that has tradtionally inhabited northwestern Africa, already before the arrival of Arab conquererers, and converted to Islam in the early periods of the Muslim empires. Why do we mention the Berbers in an online travel guide about Sri Lanka? Just because the erranoneous Western European term “Berber” for “Muslim” was the origin of the colonial name of Beruwela. It was formerly known as “Berberin or “Barberyn”.

Although the Eastern Province has become the the area of Sri lanka with the highest pecentage of Moor population since the Kandyan period, Beruwela in the Western Province is still considered to be their cultural centre. Beruwela is said to have been the spot of the first Muslim settlement on the island. Gem trade was the main reason for Muslim merchants to settle down in Sri Lanka. Gem trading is dominated by Sri Lanka Muslims till the present day. There are plenty of Muslim prayer halls in Beruwela, Masjid ul Amra (Masjidul Abrar Jumma Mosque) being one of the loveliest. It's also the largest one and therefore simply called "Grand Mosque". The prayer hall is 30 m long and wide. Due to its location in the quarter of the same name, it's also known as "Maradana Mosque". 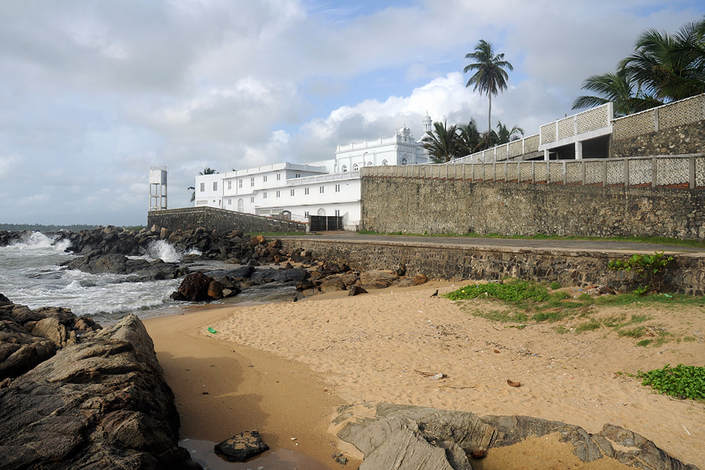 Kechimalai Mosquet marks the spot where the first Muslim prayer hall was established on the island of Sri Lanka. There are many different spelling of this Tamil word, for example “Kechimale”, “Ketchimalai” or “Kachimalai”. A first settlment is said to have been established by Arab traders as early as in the 8th century. However, according to local tradition, Kwchimalai Mosque was founded on this headland at the harbour bay in the 11th century. According to local tradition, the Muslim village and mosque were established by  Shaykh Yusuf bin Ahmad al-Kawneyn, who is credited with having converted locals to Islam, too. The building that can be seen today is from the colonial period. 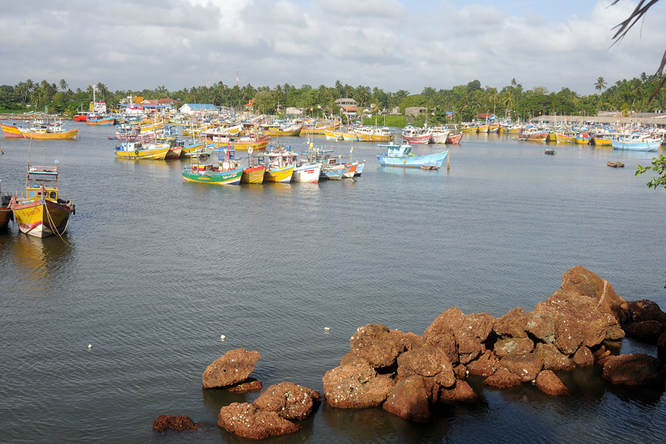 Kechimalai Mosque is situated on the northernmost promotory of Beruwela's seashore. It protected the harbour bay of Muslim seafarers. That’s why the mosque is the best vantage point to see the fishing port, which is now protected by two additional harbour moles, the longer one is attached to the Kechimalai promontory in the west. Beruwala is now a commercial fishing harbour in the first place. Once, it was the island’s major seaport for Muslim trade in the Indian Ocean, for spice and gem export in particular. The Muslim predominance in this area was the reason why the port was called Barberyne harbour during the colonial period. The best time to visit the Beruwela harbour is the early morning between 6.00 and 7.00 am, when the night fishing boats return and fresh fish is sold directly. 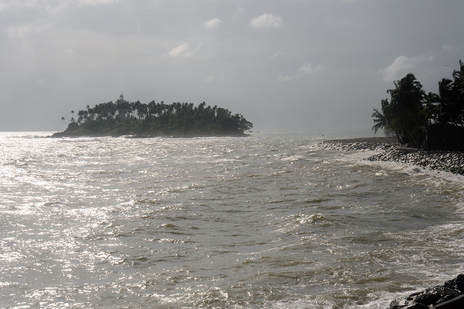 Beruwela Lighthouse is also known as Barberyn Lighthouse, due to its location on the islet of the same name. Barberyn Island, picturesquely covered with coconut and mango trees, is situated just 500 m offshore. It covers not much more than 3 hectares. The lighthouse is a 34 m (112 ft) tall whitewashed granite tower. It’s designed in the classical slightly conical shape or European beacons. Barberyn Lighthouse is from the British colonial period. A first lighthouse was erected on Barberyn Island in 1889. The current one was completed in 1928 and has been modernized several times, as it is one of only four international lighthouses of the island nation of Sri Lanka. Remarkably, the British continued to operate it even after Ceylon’s independence. Sri Lanka has been in charge since 1972. Boat trips to the lighthouse can be arranged. The rides take about 10 minutes one way. The islet is inhabited by lighthouse keepers.  A winding gravel path leads to the beacon, which is placed about 15 m above sea level. 140 steps lead to the top level, which offers spectacular scenes of Sri Lanka’s south-western coastline. 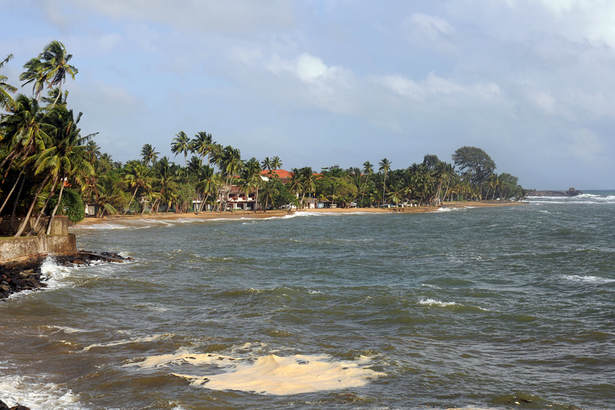 There is an excellent view point at the seaside of the Maradna Muslim neighbourhood. To the northeast, the Barberyn Island Lighthouse can be seen, it's in only one kilometer distance. To the south, you can the northernmost part of the tourist area of Beruwela. This sandy beach is narrow, not as wide as Moragalla Beach further south. However, advantage is that the lush green palm groves reach close to the seashore. This small beach is called Galway Beach. The vast hotel complex of the same name, the red roof of which is easly recognizable, is not operated currently. The much smaller Ypsilon Tourist Resort with attached diving school under Gemran management is equally close to the beach. The bungalows embedded in the palm grove are cozier and less expensive alternative to the huge hotel complexes at Moragalla Beach,  though - regrettably - not paying for our recommendation. 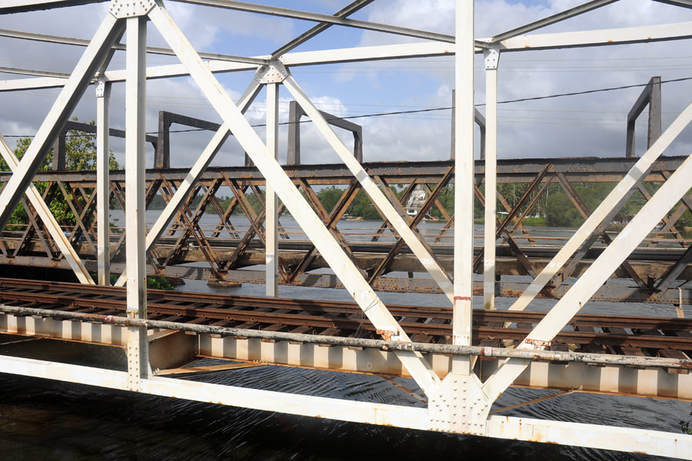 Bentota Bridge indeed consits of two parallel bridges, which connect Aluthgama, Beruwela’s southern suburb where most hotels are located, with the neighbouring beach tourism hub of Beruwela. One bridge is for the coastal road A2 from Colombo to the cities of the Southern Province, the other one for the railway line running always parrallel to it. The Railway Line is known as “Queen of the Sea.”