Maligatenna, also spelt Maligathenne, is the highest hill in Gampaha District, an excellent vantage point with a 360 degree panorama. The rocky hill is crowned by a dagaba, as Maligatenna is an ancient monastery, too. It belongs to the group of temples in the rarely visited area of Siyane Korale. 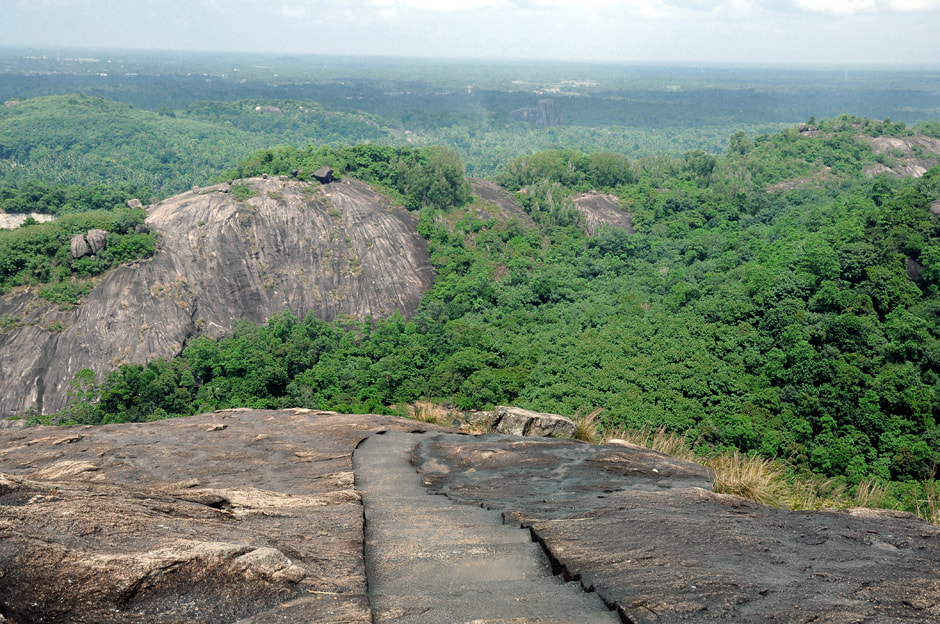 The cave temple complex of Maligatenna, still inhabited by monks, can be seen at the northern slope of the hill. Starting at the temple, a 1 km long jungle path leads to the summit. It passes a cave and a small chasm.

Be aware, there are several villages in Sri Lanka called Maligathenna, for example in Uva Province between Badulla and Moneragala.

In contrast to the nearby monasteries of Pilikuttuwa and Varana, the two other major heritage sites in the “Siyane Korale” are of Gampaha District, no ancient Brahmi inscription have been found at the caves of Maligatenna, although there are several ancient drip ledges, known as Katarams, where such donation inscriptions usually had been engraved. However, it may be assumed, that the caves of Maligatenna like those of Pilikuttuwa and Warana were inhabited by monks in the early Anuradhapura period, this is to say: already in pre-Christian centuries.

Maligatenna is one of the many temples claiming to have served as a refuge of King Walagamba (Vatthagamani Abhaya) during his years in exile, after Anuradhapura had been captured by Tamil invaders. A person called Hiripitiye Rala is said to have helped the king when he was hiding in Maligatenna. According to local folklore, from that period onwards the caves of Maligatenna have been used a hideout for kings and princes of ancient and medieval Sri Lanka, when they sought refugey from enemies.

Two of these local legends have it, that Maligatenna was the refuge even of the Tooth Relic for a short period and that the temple was named after this most important Buddhist object of worship. Actually, “Maliga” is the term well-kown from the official name of Kandy’s Tooth Temple: Sri Dalada Maligawa. Both periods during which Maligatenne served as a hiding place of the Sacred Tooth Relic, were times of foreign invasions, namely at the end of the Polonnaruwa period and again at the end of the Kotte period.

When Kalinga Magha marauded and devasteted the Polonnaruwa Kingdom in the first half of the 13th century, the sacred Tooth Relic had to been protected by bringing it to safer areas further south. It is said that the monk Vachissara Sangharaja brought the holiest Buddhist Relic to Maligathenna.

During the Sitavaka period in the 16th century, the Tooth Temple was situated in the most important capital of the three Sinhalese kingdoms of that period, in Kotte. When the Sacred Tooth of the Buddha was threatened to be stolen by the Portuguese who were eager to destroy non-Christian objects of veneration and places of worship, the chief lay custodian of the Tooth Relic, the Diyawadana Nilame of Hiripitiya, received a message to bring the Sacred Tooth to the middle of the island. The relic was brought to Sitavaka for safekeeping. Because Sitavaka was occasionally invaded by Portuguese forces, too, the priest kept it hidden in some distance from Sitavaka, namely in Delgamuwa. According to the local folklore of Maligetanna, the national palladium was first brought from Sitavaka to Maligatenna for safekeeping and only afterwards to Delgamuwa near Kuruwita, where it remained hidden in a grind stone for several decades before being transferred to Ratnapura and finally to Kandy.

The temple compound is divided into two grounds on different levels, which are called Pahala Maluwa and Ihala Maluwa. The main places of worship such as a stupa called Sri Devaraja Aakasha Chaitya Rajaya, a sacred Bo tree and a cave transformed into an image house, belong to the lower terrace, the Pahala Maluwa. This largest cave now is decorated, containing modernized statues and paintings from the 20th century reviving the Kandyan style. But this Buda Geya is said to have been adorned as a shrine room already by King Walagamba in the first century BC out of gratitude, as he had been sheltered here. The 5.5 m long reclining Buddha in the cave is said to have been sculptured on order of King Walagamba in the 1st century AD, although the first Buddha images in India are not earlier than the 1st century AD. The meeting hall of the monks is located in adjacent to the Budu Geya cave, only a few steps further downwards.
The Pahala Maluwa is also the temple’s main quarter inhabited by monks today, with a newly renovated indoor promenade and an ancient outdoor promenade, and also serving as a retreat of monks from other regions who want to spend some time at a more remote site. Such modern forest monasterie sare called Aranya Senasayas. This is why the Maligatenna Rajamaha Viharaya is also known as Maligatenna Aranya Senasayana, this literally means, the “Royal Monastery” of Maligatenna is also a “Forest Hermitage”. As it is can be seen in several modern forest monasteries, a skeleton is hung up as a reminder of the transient nature of all beings.

There are several rock shelters transformed into monks’ dwellings. One ancient rock cave, home to an ancient Devalaya for the worship of gods, has an granite door frame with delicate engravings, which was dated to the late Anuradhapura period by Senarath Paranavithana, the doyen of Sri Lankan archaeology. The shrine, however, is more likely from the 15th century Kotte period. Adjacent to this Devalaya there is a stone with 5 by square holes, a so-called Needan Gala, an ancient reliquary.

Crossing the area with the the monks’ dwellings, one can  climb towards the top of the Maligatenna peak via a graveled rocky route. The path is also running through one of the natural caves and then uses a series of stairways, some of which are ancient. One flight of steps leads through a rock chasm. It’s called Degaldoru Kurubil. It is believed to be a place whera a human being became an enlightened being in the mid Anuradhapura period. According to local folklore, a monk by the name of Mittasabha had have lived in the caves of Mailgatenna for seven years, when he attained Nirvana at this rugged site.

A gust of wind will welcome you on the top. The summit is crowned by a white stupa. The summit is known as the Uda Maluwa, which literally translates to “upper terrace”. Near the stupa, a large rectangular water lily pond on the summit is believed to never dry out. Locals  believe that a treasure was hidden by King Walagamaba at bottom of this pool.

An old Bo Tree with traces of a terrace can also be seen on the summit plateau. The tale around it has it, that King Mayadunna of Sitavaka commissioned the guardian of the Sacred Tooth, then the Diyawadana Nilame of Hiripitiya, to build a temporary Tooth Temple here. In the 19th century, a monk from Nittambuwa, who had settles down in Maligatenna, planted the Bo Tree unsing stones from the broken foundation of the former tooth temple to build the terrace of the Bo Tree.

The panoramic view from Gampaha District’s highest Peak is definitely one of the major attractions of Maligatenna.