The Buddhist temple in Beligalla in Kegalle District is said to have been one of the first 32 places where saplings of the Anuradhapura Bo-tree were planted. In the early 13th century, Beligala was the hideout where the Sacred Tooth Relic was kept by the Dambadeniya King Vijayabahu III. 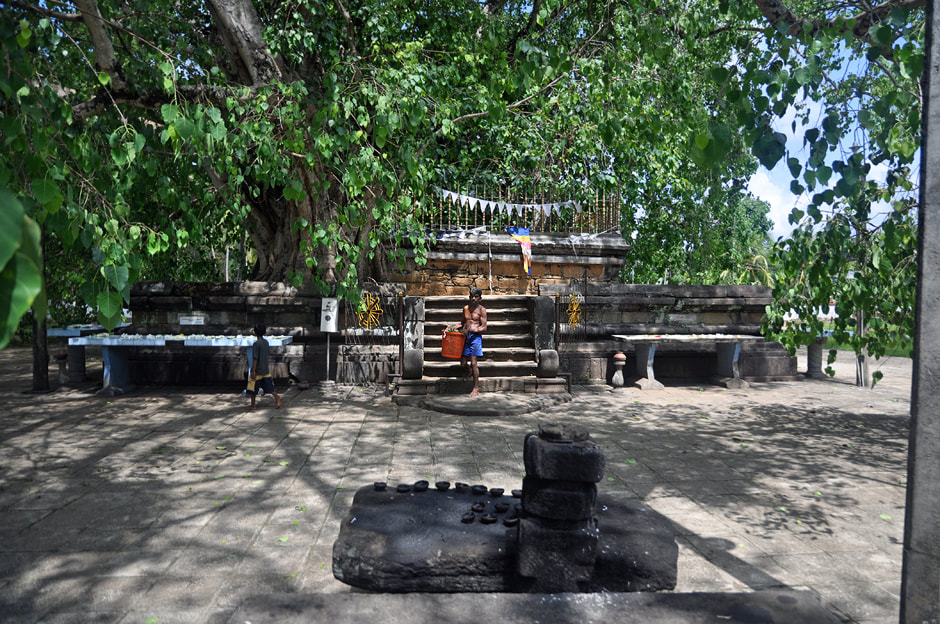 Beligala is one of the numerous places believed to be a hideout of Königs Walagambha in the 1st century BC. An even more important and famous refuge story is probably historically accurate. When the maruding invader Kalinga Maga captured Polonnaruwa in 1215, the Sacred tooth relic was moved to Kotmale in the hillcountry. King Vijayabahu III (1232-1236) from the a dynasty by the name of Sirisanghabo managed to develop his residence Dambadeniya into the new powerhouse of the Sinhalese forces outside Kalinga Magha’s sphere of control. The prestige earned by being the safekeeper of the Tooth Relic significantly contributed to the rise of the Dambadeniya king. He chose the Beligala Rajamaha Viharaya to host the tooth relic. Records have it that he erected a special building with a roof covered in golden tiles.
There is not much left from Beligala’s glory. A moonstone of a unique style could be a remnant from the Dambadeniya period. This Sandakada Pahana is definitely older than typical Kandyan moonstones  from the 19th century, as it does not yet show the triangular shape of the Kandyan style. But similar to Kandyan moonstones and in contrast to Polonnaruwa moonstines, the Sandaka Pahana of the Beligala Rajamaha Viharaya is very thick and furthermore elevated in the centre. It’s not a bas-relief any more but three-dimensional. This is definitely a transition style, from a period between the Polonnaruwa and Kandy times. There is another similarity to the Kandyan style. The Beligala moonstone is not a perfect hemisphere, a circle cut at its perimeter but covers more than 180 degree, just like later Kandy moonstones. In contrast to Kandy moonstones, there is an outer ring with carvings in the previous styles of Anuradhapura and Polonnaruwa. Probably the Sandaka Pahana of Beligala is the only preserved moonstone from the Dambadeniya period.

Inside the shrine room, there are modern murals in the Kandyan style. A capital specimen of a Bo-tree can be seen in the courtyard between moonstone and modern image houses. It is believed to be grown from an offshoot of the Anuradhapura Bo-tree already in the pre-Christian era.