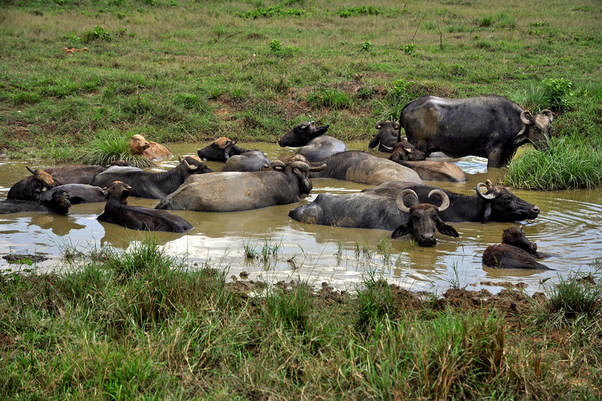 Maduru Oya is one of the three largest national parks in Sri Lanka, besides Wilpattu and Yala, it’s not as densely populated by leopards as those two and the elephant herds are not as large as at Minneriya. But the main reason why only few travellers visit Maduru Oya National Park is its remote location. This in a sense is a major atttraction of Maduru Oya: It’s a lonesome place really off the beaten track. In contrast to the other national parks just mentioned, it’s not crowded with jeeps. You will scarcely meet other foreigners inside Maduru Oya National Park. It’s the perfect park to exerience the genuine wildlife of Sri Lanka, undisturbed by mass tourism. If you have time enough to travel to Mahiyangana and and to stay two nights in the traditional Wedda lands, we highly recommend to enjoy the scenic beauty of this national park.

Maduru Oya National Park was designated on 9 November 1983. Situated mainly in the Eastern Province, the southwestern quarter of the Nationa Park near Mahiyangana and Dambana belongs to  the Uva Province. The large Maduru Oya reservoir forms the centre of the park, the northern tip of which spans a few kilometres into the North Central Province.

The vegetation is scrubland typical for Sri Lanka’s dry zone. The mean annual precipitation is 1,650 millimetres (65 in), mainly in the northern hemisphere autumn months, which is the anti-monsoon period in Sri Lanka. Vast stretches of open plains dominated by grasses are remnants of human cultivation but now favourite feeding grounds of elephants.

There are several hills and groups of rocky outcrops inside Maduru Oya National park that are of archaeological interest. Ruins, statues and other traces of Buddhist monastic settlements from the Anuradhapura period can be found at Henanigala, Kudawila, Gurukumbura, Uluketangoda and Werapokuna. Inscription from the earliest period of Buddhism in Sri Lanka (3rd century B.C.) has been discovered in Kandegamakanda. Most interstingly, the best preserved ancient sluice has been discovered and excavated in Maduru Oya, a Bisokotuwa from the 6th century A.D. Bisokotuwas are constructed inside the dam and consist of a vertical duct and an inlet floodgate and an outlet floodgate. The Bisokotuwa technique is optimized to divert water from the bottom of a tank, which has the advantage of independence from the water levels but the disadvantage of high pressure. Bisokotuwa is a technique used to reduce this pressure, allowing relatively constant draining capacities. The same technique was introduced in Europe one millennium later than in Sri Lanka. The Maduru Oya sluice discovered in the 1980s is about 9 m high and wide and 67 m long.