Medirigiriya - charming heritage site with one of the best Vatadages

Medirigiriya, also spelt Madirigiriya, is a small but significant archaological site in Sri Lanka, has one of the best examples of a Vatadage, a characteristic type of architecture of the ancient Sinhalese civilization. The very charming heritage site of Medirigiriya is located 30 km north of Polonnaruwa. 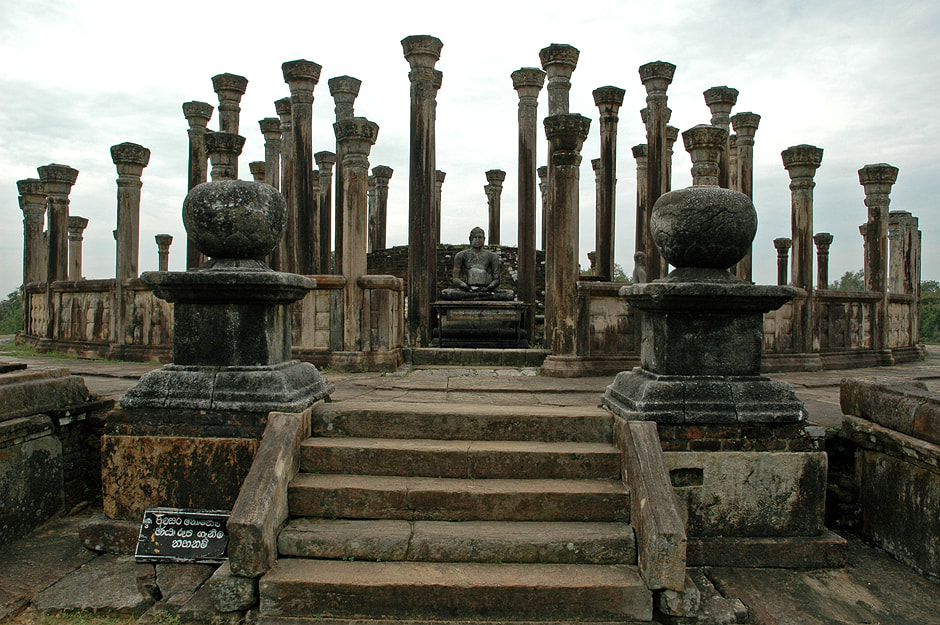 Mediririgirya, known as Mandalagiri in ancient Pali chronicles, is the name of both a village and a nearby archaeological site. The latter is the main attraction of this quite remote area, which is situated in between Kaudulla and Somawathiya National Parks in Polonnaruwa District. Medirigiriya, being of some historic significance and a pretty idyllic site today, is a rewarding detour from the Anuradhapura-Polonnaruwa main road. The sea of debris of an ancient monastery is not an overcrowded overcrowded touristic place of interest, however, don't consider it to be a completely unknown off-the-beaten-path destination, as this archaeological site that is listed in most pocket guides of independent travellers and also frequented by some bus groups. But many of those groups are not foreign tourists but Sinhalese pilgrims. The site is still held in high veneration among Buddhists. All in all, most guests can still enjoy sightseeing in Medirigiriya completely undisturbed by noisy crowds. 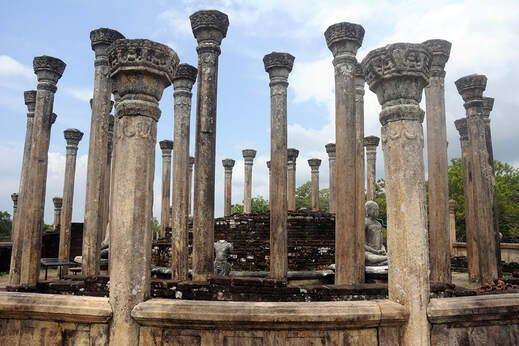 Medirigiriya, situated in Polonnaruwa District, is most famous for its Vatadage, a circular temple containing a small stupa in the very centre. This is a type of edifice that is typical of ancient Sinhalese architecture and not found in Buddhist architecture in India. Though the much later Vatadage of Polonnuruwa of course is much more famous, Medirigirya has one of the two best-preserved circular temples from the Anuradhapura period, the other one being Thiriyai from roughly the same century. However, there is a significant difference in today’s appearance of these two classic specimens of Vatadages. The striking feature of the Thiryai Vatadage near Trincomalee is its circular outer wall, such a massive wall is absent at the Vatadage of Medirigiriya. In edirigiriya, however, the circles of columns, which once carried a wooden roof, are the most striking feature, almost resembling a small forest of pillars. Nowhere else in Sri Lanka are as many columns on such a small space. The Vatadage of Medirigiriya is picturesquely placed atop a granite boulder. 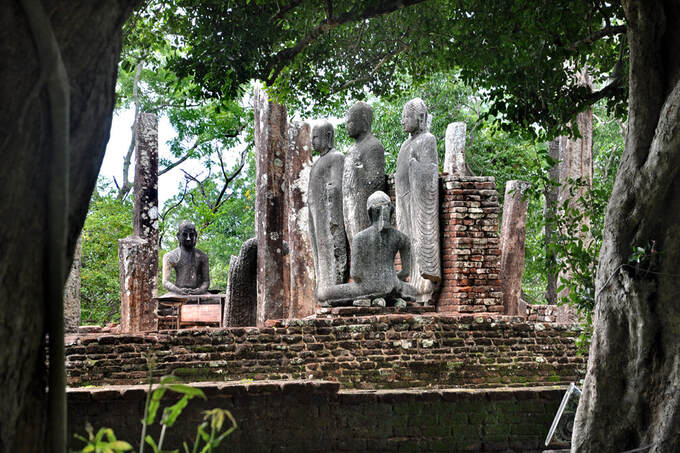 There is another feature that makes Medirigiriya somewhat special. Apart from the large ruined cities of Anuradhapura and Polonnaruwa, there is no other place where so many ancient Buddha statues are still in situ. Three of theses statues stand in there original position in an ancient image house, which is one of the earliest of this type of building which is a classic feature of Sri Lanka’s ancient monateries from the late Anuradhapura period. Most of those image halls, called Pathimagara in Pali, are much larger and have a separate chamber in front of the shrine room. Not so in the case of Medirigiriya, here the structure is small in size and very simple in its layout, indicating an early stage of development of this architectural form. 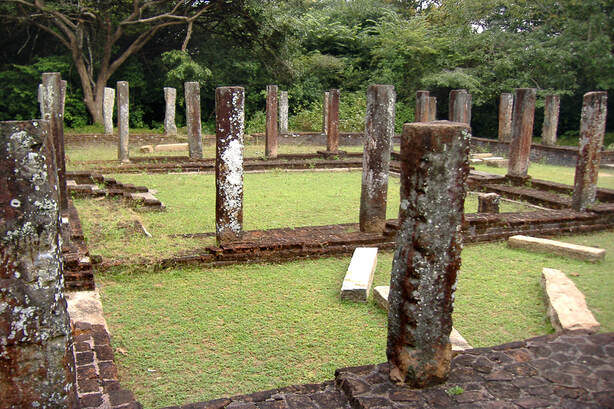 Medirigiriya seems to have been a pilrimage site during the Anuradhapura period. This too is indicated by the presence of an ancient Ayurvedic hospital. Its remains are a little bit hidden, but can be found by climbing to the stupa just opposite to the Vatadage and then following the jungle path 100 m further down. This hospital was small in size when compared with the more famous one in Mihintale, but it's much larger than the Janthagara-type hospitals of Ritigala. The foundation of the Medirigiriya hospital has been restored. The edifice measurer 16 m by 16 m. Encircling a central court is a corridor. Beyond it, there are rooms of the inmates just as in the case of the ancient Mihintale hospital complex. In contrast to Mihintale, the Beheth-oruva, a stone trough used for immersion therapy, is not in situ any more, as the Department of Archaeology has removed it for safekeeping to the image house terrace near the Vatadage. The trough measures 230 cm in length, 64 cm in width and 58 cm in height. An elevation of the head-rest enabled the patient’s head to be above the fluid level. Such medicine troughs were used to cure patients suffering from rheumatism in a herbal bath. It's also likely that snake-bite victims were treated by placing them in oil baths in such an Beheth-oruva. 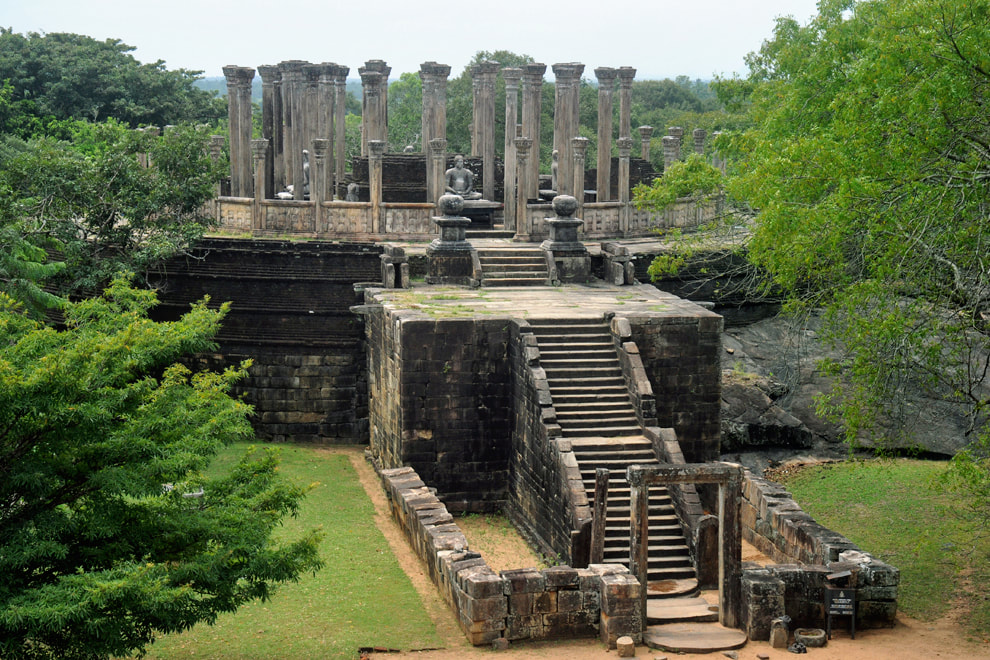