Though you can find many guides and websites claiming superlatives, the well-preserved Aukana Buddha Statue is neither the tallest nor the biggest rock-cut sculpture, since the largest rock-cut Buddha statues are in China and Sri Lanka’s ancient Buduruwagala Buddha statue is taller and the modern rock-cut sculpture of Rambodagalla is much bigger. Nevertheless, with regards to the sheer size the Aukana Buddha is undoubtedly the most significant and impressive rock sculpture from the Anuradhapura period. Concerning volume, the Aukana statue is actually the largest of the ancient Buddhist sculptures on the island, since the Buduruwagala Buddha is not as wide and as deep, and the bigger Rambodagalla Buddha is very new. The Aukana Buddha statue measures 3 metres (10 feet) across the shoulders and is 11.8 metres (39 feet) tall, rising above a decorated lotus plinth (Padmasana), which is also cut from the rock. The total height above ground level is almost 14 metres (46 feet). Originally, the Aukana Buddha statue had been placed within a large image, of which foundation walls still remain. 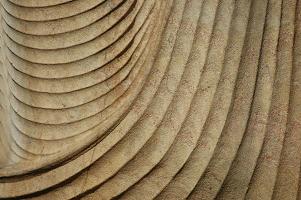 The splendour of the Aukana is not only its size but all the more its beauty and its technical perfection. Locals say, that on a rainy day droplets of water falling off the tip of the Buddha's nose hit the ground exactly between the toes, proving the accuracy of the sculptor. The Aukana Buddha is a masterpiece of fine arts, too. Particularly the robe is noteworthy. Its delicate carving reveals the underlying form of the Buddha’s body. As in the case of many other Buddha statues, the body seems to be neither male nor female. In accordance with the South Indian Amaravati style, the robe in single groves is draped over the left shoulder to fall over the left shoulder up to the ankle, whereas the right shoulder is left bare. From the Buddha’s curled hair there sprouts the flame called Siraspata signifying supreme enlightenment. The Aukana Buddha Statue shows an otherwise rarely seen gesture called Asisa Mudra (Ashisha Mudra), which is indicating both blessing and pointing in a direction. Asisa Mudra is only shown by standing Buddha statues. Most of the Buddhas in Asisa Mudra are from Sri Lanka, this gesture is not found in Northern India or other parts of Asia. But some examples of Asisa Mudra are known from South India’s Amaravati art, too.

The best time of the day to view this statue is dawn, when the rays of the morning sun pick out the gracefully carved robe. It is often claimed that “Aukana” means “sun eating” in Sinhalese language.