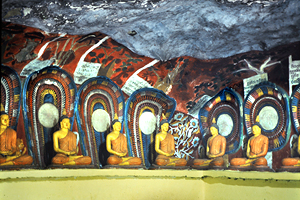 The entrance to the second chamber, which is the main cave, is decorated with a Makara Thorana. The cave temple of Dowa is also called “Gal Vihara Geya”, which means “Rock Monastery House”. This is a general term refering to an Image House inside a rock cave. The interior of the taller one of the 2 caves rises to a height of almost 4 metres (12 feet). The first cave under a leveled inclined rock measures 3 m (10ft) in width and 9 m (30 ft) in length. It is rare example of a Sri Lankan rock shelter the opening of which is lower than the rear part. It contains 28 small seated Buddha statues ("Ata Visi Buddha Prathima ") and also images of deities. The canopy of the cave room is decorated with typical Lotus flowers in an ornamental manner ("Viyan Sithuwam") as well as with symbols of the astrological chart. A rare feature is the depiction of a battle between a tusker and a bull, a scene known as “Eth-Gon Satana”, “Eth” being an elephant and “Gon” a bull. 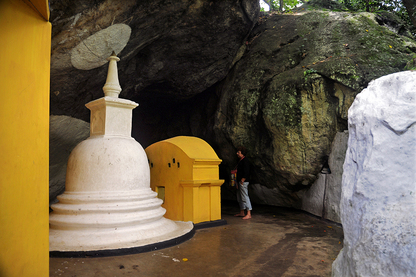 Particularly Cobra has been given much prominence amongst the images in the Dowa temple. Raw eggs placed in sacrifice in front of cobra image at the entrance bear testimony of the deep belief in a living cobra in those caves. There is an entrance to a legendary secret tunnel at the rear of the Dowa Temple. It is supposed to have been used by King Valagamba for his escape. Legend has it, that the tunnel connects Dowa with Bogoda or with the Ravana Ella cave. It is said a network of tunnels once was built by the legendary demon king Ravana in order to transport and hide Sita invisibly. As in other cases of such tunnel entrances, they are closed. And most probably the tunnel rooms do not run very deeply below the surface.

In the entrance cave of this supposed tunnel, there is a small white stupa. It is believed to contain the tooth of a Buddhist saint, an enlightended monk called Arhant or Arahat in ancient texts. There were only few Arhants on the island of Sri Lanka and, according to orthodox Theravada Buddhist belief, only during the first centuries after introduction of Buddhism. Such Buddhist saints, who attined Nirvana, are held in high veneration among pious Sinhalese Buddhists. They believe, that currently there is no chance to attain Nirvana, but collecting good Karma can help to be reborn close to the future Buddha Metteya (Maitreya), who then will help his followers to find final salvation.