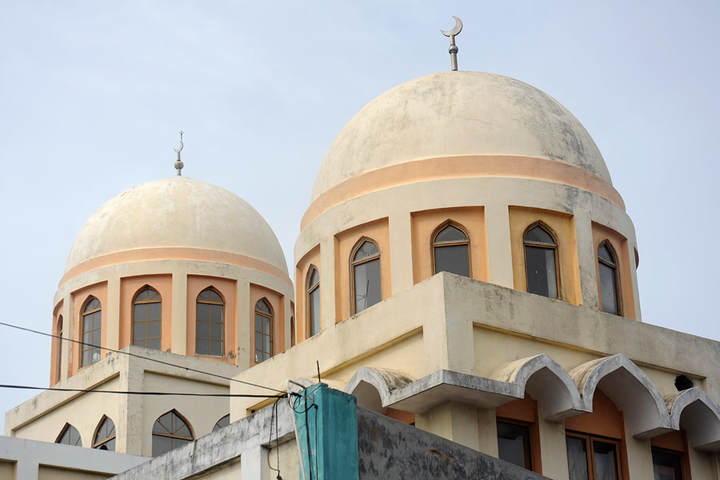 The name "Puttalam" may be derived from the Tamil word “Uppu-thalam” translating to “salt-area”. Actually, the large Puttalam Lagoon is one of the major salt production zones of Sri Lanka. Besides fisher and salt production, shrimp farms and coconut plantations play a major role in the region’s economy. Puttalam also hosts one of the largest cement factories in Sri Lanka.

The area of Puttalam is the westernmost part of the island’s dry zone, with its typical semi-arid climate of about 1200 mm annual presipitation with peak rainfall in the anti-monsoon season from late October to early December.

Puttalam town is the capital of the district of the same name and one of the three large fishing harbours between Colombo and Mannar at the western coast of Sri Lanka. In contrast to the other ones, Negombo and Chilaw, which are predominantly Christian, Puttalam is a Muslim majority divisional secretariat. Although the percentage of Muslim population in Puttalam District, the other major cities of which are Chilaw and Anamaduwa, is only 20% (compared to more than 40% Buddhists and more than 30% Christians), almost two thirds of the population of Puttalam divison, with 90% in the urban areas, are so-called Sri Lanka Moors. Besides Puttalam and adjacent Kalpitiya, there are only very few Muslim majority areas in Sri Lanka, namely some coastal regions of the Eastern Province, the Musali division between Mannar Island and Wilpattu National Park, and the Akurana division of Kandy District. The native language of Sri Lanka Moors is a dialect of Tamil with lots of Arabic word borrowings. However, most Muslims in Puttalam also speak Sinhala fluently.

Sightseeing attractions in and around Puttalam

Puttalam town has some mosques of a historiziszing style of the 20th century. But honestly, Puttalam in itself is not a place of interest for travellers, except from those mainly interested in ethnology, as there are many villages of minority groups in the surroundings, see below. Most travellers visiting this region stay at the other side of the large Puttalam Lagoon, on the peninsula of Kalpitiya, which has nice beaches and is famous for dolphin watching ad kite surfing. Or they proceed to guesthouses in the village of Nochchiyagama, which is situated at the main gate of Wilpattu National Park, halfway between Puttalam and Anuradhapura.

In contrast to the other district of Sri Lanka’s Northwestern Province, Kurunegala, Puttalam is  not a district crowded with heritage sites, although this region was densely populated in the Anuradhapura period. Rarely visited heritage sites that are pretty charming are Paramakanda near Anamaduwa to the southeast, 27 km by road, and Wilandagoda Aranya to the northeast, 55 km by road. The remote Wilandagoda is one of Sri Lanka’s most picturesque groups of ancient cave temples completely untouched by tourists, though worth visiting indeed.

Besides Sri Lanka’s largest national park, Wilpattu, which is the main attraction of Puttalam District, the ancient tank of Thabbowa is a quite rewarding destination for nature lovers, for birders in particular. It’s an elephant wildlife area, too. Thabbowa, also spelt Tabbowe, is in only 17 km distance to the east, close to the Anuradhapura main road (A12), which connects Puttalam at the west coast with Trincomalee at the east coast.

A major attraction for those cultural travellers interested in folk customs is the Tamil fishing village of Udappu, 35 km to the south of Puttalam town. Udappu is known for its highly frequented Hindu temples and large-scale festivals. The annual 18-days festival at Udappu, which is famous for fire-walking and other ascetic practices, takes place end of July and begin of August.

The Kaffirs (Kapiriyo in Sinhala, and Kapili in Tamil) are a Sri Lankan ethnic group of African origin, mostly descendants from Bantu slaves deported by the 16th-century Portuguese slave trade. The Portuguese name “Cafrinhas” is a diminutive of “Cafre”. The underlying Arabic term “Kaffir” means “non-believer”, though most Sri Lankan Kaffirs were Muslims originally. The word “Kaffir” was once used in English to designate natives from eastern and southern Africa. Unlike South Africans, Sri Lankans of African origins do not consider the term “Kaffir” offensive.
The presence of Africans in Sri Lanka has been documented as far back as the 6th century, when Ethiopian traders stopped by the island. Arab merchants already traded slaves from Africa, this was intensified by the Portuguese seafarers in the Indian Ocean. With the arrival of the Dutch, arch rivals of the Portuguese, the Kaffirs worked on their cinnamon plantations. Those Kaffir slaves often were chained up. The Dutch forced some of them to serve in their army. In the early 19th century, the British brought additional African soldiers, not slaves any more, to Sri Lanka to fight against the King of Kandy. Those days the Kandyan army also employed descendents of runaway African slaves from previous African immigration waves. During the 19th century, the British colonial administration recruited laborers mainly from South India, marginalizing the Kaffirs` significance. Many Kaffirs have been denied education.
Many Kaffirs have assimilated and intermarried with the lower castes of various Tamil and Sinhalese communities. Others left the country. But some Kaffir groups survive in pockets, mainly at coastal regions such as Trincomalee and Batticaloa at the east coast and Puttalam and Negombo in the west. Near Puttalam is a village with 50 families, most of them work as menial labourers. Though originally Animists and later on Muslims, many Kaffirs converted to Buddhism and Christianity, most Kaffirs being Roman Catholics today. Kaffirs are a very small community, even many Sinhalese and Tamils in Sri Lankas don’t know anything about them and are sometimes surprised to hear people with darker skin, thicker lips and curly hair speaking Sinhalese and to learn they are citizens of Sri Lanka.
Kaffirs are of Sri Lankan nationality now but aware of their African background and proud to have some African traditions, dancing and singing performances being their strongest elements of African culture. Kaffirs today fear that their culture is dying and could be of a bygone era very soon. Their dance styles are called Kaffringna and Manja, and their dance music is Baila. The term is adapted from the Portuguese verb “bailar” meaning “to dance”. Baila is popular in Sri Lanka in other communities, too. Though its of African origin, Baila was later amalgamated with European instruments and combines eastern and western rhythms.
Kaffir families have orally recorded histories about their ancestors, many of them claim to be from Mozambique. Kaffirs have their own language, which is a mixture of Sinhalese and Tamil today and was much more influenced by Portuguese in the past.