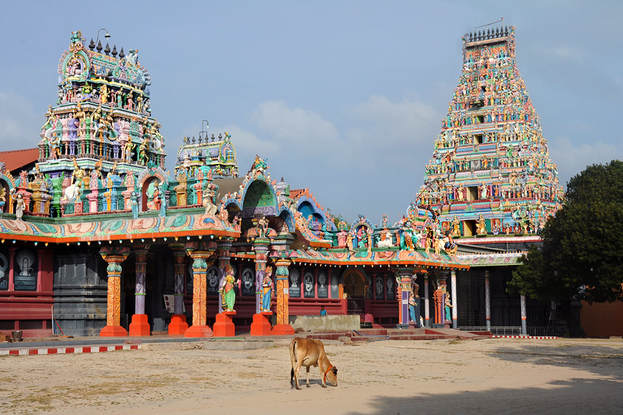 Nagapooshani Amman Kovil is a historic Hindu temple dedicated to the principal goddess of Tamil Hindus, Amman. Nagapooshani, also transcribed 'Nagapushani' or 'Nagapoosani' is the name of her local form. She is identified with the famous Tamil deity Meenakshi from Madurai from mainland India, who in turn is idetinfied with the pan-Indian deity Parvati, the consort of Shiva. Shiva, the highest god of Tamil Hindus, is venerated in this temple, too, in his local serpent form as Nayinar. Indeed, the temple was originally dedicated to this serpent deity.

The site of the modern temple complex is considered to be one of the most ancient places of worship in Sri Lanka. Many Tamils believe the sanctuary to have already existed when their ancestors, the Nagas, came to Sri Lanka in pre-historic times.

Adi Shankara, India's great 9th century founder of Vedanta philosophy, in his work "Shakti Peetha Stotram" identified the shrine as one of 64 Shakti Pithas listed in the Brahmanda Purana, one of the major eighteen Puranas of Hindu mythology. Shakti is the female aspect an the power of the highest god. All major Hindu goddesses are personifications of Shakti. 'Shakti Pithas' (also transcribed 'Shakti Peethams') are temples dedicated to various female deities all over the subcontinent.

Amman is a typical mother goddess attributed with powers to protect and heal and to grant fertility. Women wishing to conceive come to visit her. seeking blessings during the midday pooja. Many childless couples go on pilgrimages to Nainativu Island. Other devotees come to present their babies to the deity, in order to fulfil previous vows they had made here.

One myth of origin of the Nagapooshani Amman Kovil refers to the classic Sanskrit epic Mahabharata. An episode tells that Indra, seeking sexual intercourse with the wife of the sage Gautama Maharishi, simply disguised himself as that great sage. When Gautama Maharishi came to know about it, he cursed Indra. As a result of the curse, one thousand marks in the shape of a yoni (the female genital) covered the god's entire body. Indra, fleeing humiliation, went into exile to Nainativu Island for penitential exercises. The island's goddess, also known as Bhuvaneswari Amman, then accepted Indra's repentance an finally transformed the yoni marks into eyes.

Another legend has it, that a Naga serpent was swimming towards Nainativu Island, carrying a lotus flower for worshipping Goddess Amman. But a Garuda eagle spotted the cobra snake and attacked it. The Naga, in fear, wound itself around a rock 500m away from Nainativu. The name of the rock, Pambu Sutriya Kal, ever since refers to this event. A merchant from the Tamil Chola kingdom sailing across the Palk Strait saw the fight on that rocks and brought the Garuda eagle around to let the Naga serpent continue the voyage to the Goddess. But the eagle's condition was for allowing to do so was the construction of a temple for Amman on Nainativu Island. 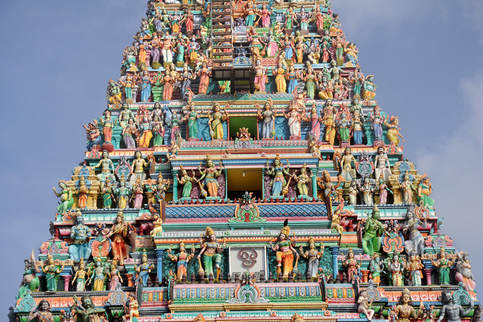 The temple complex houses four gopurams. The Raja Raja Gopuram, which translates to "King of Kings gateway-tower", is the largest of the four temple towers sumounting the gates of the Nagapooshani Amman temple. Actually, with a height of 33 meters this is Sri Lanka's tallest Hindu temple tower at all.

Monumental gateway towers, in size by far surpassing the roof of the central shrine (vimanas), are the characteristic and dominant features of the Dravidian style of temple architecture, which originated in southern India in the early Middle Ages (Pallava period). The Tamil words "go puram" translate to "king exterior". However, the etymology is uncertain. In Sanskrit, "go puram" could mean "eye of the city". Gopurams are representations of the mountain abodes of the gods, consisting of different levels inhabited be divine and other numinous beings.

More than 2000 sculptures adorn the colourfull Raja Raja Gopuram, which became the landmark of Nainativu Island. It was constructed in the first years after the end of the civil war with support from of artists from Tamil Nadu in mainland India. Altogether, there are an estimated 10,000 sculptures at the shrine rooms and outer walls and roofs of Nainativu's Nagapooshani Amman Kovil. A temple revival ceremony, a typical Tamil Mahakumbhabhishekam, was held in January 2012. The event was attended by 200,000 Tamils from Sri Lanka and India and also from overseas diasporas of all continents.

At one entrance to the Nagapooshani Amman temple complex, there is a famous inscription of the Sinhalese King Parakramabahu (1153-86). Remarkably, it is composed in Tamil language. It states that foreigners landing at new ports should meet near the island of Kayts and that they have to be protected, that shipwrecked seafarers must be helped, and that one fourth of the cargo of shipwrecked vessels carrying elephants or horses is to be given over to the royal treasury. 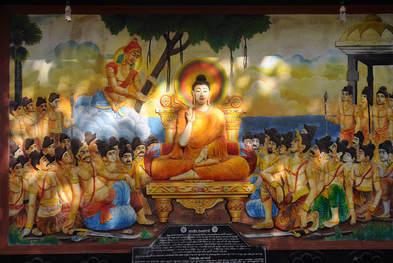 The Buddhist temple called Nagadeepa Purana Viharaya, also known simply as Nagadipa Vihara, is situated in only 300 m distance from the famous Hindu pilgrimage site. It's only a five to ten minutes walk from the Nagapooshani Amman Kovil to the south. Tuktuks are available for the short distance, too. Each of the pilgrimage sites has its own jetty. In case, more of the pilgrims coming from KKD jetty are Buddhists than Hindus, the ferry will embark at the pier of the Buddhist Vihara.

The Nagadeepa Purana Viharaya, though it's architecture is modern and of little interest for art historians, is one of the holiest Buddhist temples in Sri Lanka, since it is believed to be a place visited by the Buddha himself. A giant footprint similar to those found on the summit of Siri Pada (Adam's Peak) and to that on Delft Island is said to have been left by the Buddha on Nainativu Island. The story of the Buddha's visit is told in the Mahavamsa (pronounced 'Mahavansa').

The Mahavamsa, which is literally the 'Great Chronicle', was composed by the Monk Mahanama in the 6th century A.D. According to the chronicle the Buddha came to Nagadeepa, literally meaning 'Serpent Island', on his second visit to Sri Lanka, five years after attaining enlightenment. The aim of his journey through the air was to settle a violent dispute between two brothers, Chulodara and Mahodara, who were princes of the local Naga tribe. They both claimed to be the rightful owner of a throne richly ornamented with gem stones. But convinced by the peacefulness of the Buddha, the two quarrelling princes and their respective armies terminated their combat. Finally reconciled, they decided to gift the gem-set throne to the Buddha himself.

A corresponding story - mentioning the Buddha's visit, the footprint and the gem throne - is told in an classical Tamil epic called Manimekhalai, it's one of the "Five Great Epics" of Tamil literature and a sequel of the most famous Tamil epic, the Silappatikaram. The Manimekhalai was composed as an educational tractate by an Indian poet called Seethalai Sathanar, whose aim was to compare Buddhism favourably with Hinduism. It's the story of a female temple dancer, who was brought miraculously to Nainativu Island be the Goddess of the Ocean. There she found the once disputed gem throne. Worshipping it, she became aware of her previous life. And she took advice from the guardian deity of the seat and therefore after returning to India became a Buddhist nun.

The once disputed gem-set throne is believed to be enshrined in the dagoba of the Nagadeepa Purana Viharaya. However, this local tradition, though also known to Tamils in mainland India, see above, is not undisputed, as the Mahavamsa reports that later on the jewelled chair was used as the chair of the Buddha at his third arrival on the island of Sri Lanka, which took place in Kelaniya. Most Sinhalese Buddhists believe the legendary jewelled throne is buried under the stupa of the Kelaniya temple near Colombo.

Nagadeepa, as a place visited by the Buddha, nevertheless is held in high esteem by Theravada Buddhists from all over Sri Lanka and even from abroad. In 1956, the year of celebrations of the 2500th anniversary of the Buddha's death and final Nirvana according to the calendar of Theravadins, a Buddha statue made of bronze was donated to the temple by monks from Birma (today's Myanmar).

Nonetheless, it's disputed by historians that Nainativu Island, now bearing the Buddhist name Nagadeepa, was meant by the term 'Nagadeepa' in the Mahavamsa, as the chronicle's 'Nagadeepa' refers to a large island. It's more likely that the setting of the story of the gem throne dispute is meant to be Jaffna Peninsula, which by the way is a natural island and not a peninsula in a strict sense.

The account of the Buddha's visit to Sri Lanka given in the First Chapter of the "Great Chronicle" Mahavamsa mentions only ten places honoured by the presence of the Buddha (three of which are in Anuradhapura), namely: Mahiyangana on the first visit, Nagadeepa on the second, Kelaniya as starting point of the third visit, then the summit of Siri Pada (Adam's Peak), a place at the foot of the mountain (Divaguhawa cave), Dighavapi in the East, finally the place of the later Bo-tree and Ruwanweliseya Dagoba and Thuparama Dagoba in Anuradhapura and Sila Chetiya in Mihintale.