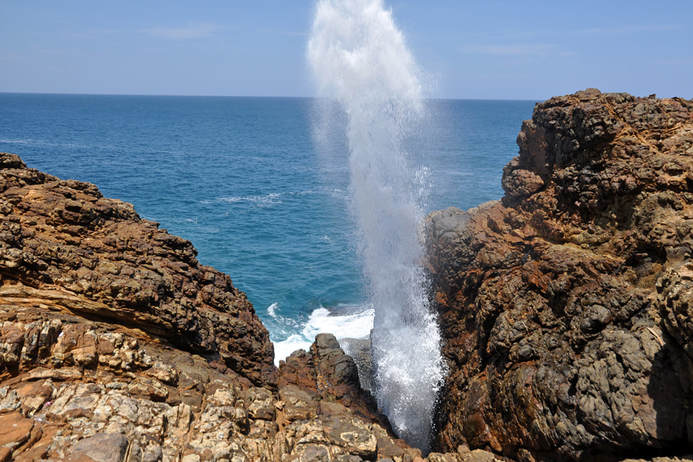 Hoomaniya Blowhole in Kudawella at Sri Lanka’s south coast is known as Hummanaya on Google Maps and in Wikipedia. “Hoomaniya” is an onomatopoetic name imitating the rumble before an eruption “hoo”, the explosion “ma” of the fountain and then the calmer rush of the spray “niya”.

Hoomaniya Blowhole is situated 13 meters above sea level. The jet of a blowhole erupts when waves of sea water rush through a submerged cavern and are pushed upwards through natural chimney and its small opening at the top. The fountain can reach heights of up to 18 meters in the air, depending on high waves. Wikipedia claims that heights of 25m to 30 m are often reached. We consider this to be an exaggeration. Such tall fountains may occur at Hoomaniya, but they are an extremely rare phenomenon here. At times of dead calm there will be no blowhole eruptions at all. The water fountain usually shoots up every couple of minutes, but the intervals are not regular and as unpredictable as the power of the eruption.

There is a small visitors' information centre on marine life and a safe viewing platform, after some accidents occured when the blowhole was not surrounded by railings.

Blowholes around the world

Blowholes, sometimes called pseudy-geysers are even rarer than geysers. Hoomaniya is one of the biggest in the world, though not undoubtedly the second talles. There is only one biggest blowhole, but there are many second largest, so to say. The highest and most powerful geysur-like sea fountain is that of Kiama in New South Wales, Australia. The bigger of the two Kiama blowholes reaches heights up to 25 meters. Australia has more giant jets, such as the Bicheno Blowhole at the east coast of Tasmania. The Quobbal blowholes near Carnarvon in Western Australia can reach 20 m.
La Bufadora on the peninsula of Baja California, Mexico, and and some European blowholes can reach heights of more than 20 m, too. They are near Cadiz in southwesten Spain, near Ogmore-by-sea at Glamorgan coast between Cardiff and Swansea in southern Wales, McSwyne's Blowhole near Donegal in northwestern Ireland.
The Northeast Bay of Ascension Island in the South Atlantic has an impressive sea fountain, too. Another one is found at Punta Suarez of Espanola Island, belonging to the Galapagos Islands of Ecuador. A smaller one very close to the shore is at Little Bay in the northeast of Barbados. Small blowhole fountains are also known from Mughsail in Oman.
The islands of Hawaii have at least three blowholes, viz. Nakalele in the north of the island of Maui, Waianapanapa Blowhole at the westernmost point of Maui, and Halona in the very southeast of Oahu. Nakalele claims to have record-breaking water spouts of more than 30 m occasionally, however, the volume of water is less than that at Kiama blowhole in Australia. One person is reported to have been fatally injured by being sucked into Nakalele blowhole. Halona, situated 20 km to the west of Honolulu, is not as big, but it’s a very impressive geyser-like fountain due to its location very close to the sea and very near sea level.
Pancake Rocks at the western coast of New Zealands southern island are famous not for the height but for the plentitude of their fountains. Severel openings of one pipe causing interconnected blowholes are also known from three islands in the South Pacific, namely Alafooga Blowholes at the villahe of Taga on the island of Savai’i, Samoa; Arahoho Blowhole at the northern coast of Tahitis, and Mapu a Vaea, „the pipe of the bobles” in the island of Tongatapu, Tonga. Those South See blowholes form groups of several openings spouting one after another, because they are of volcanic origin. When a lava stream flowing into the ocean cool down outside, they get a hard shell, whereas the hot lava inside can proceed to flow and leave an elongated pipe-like cavity. In case of several openings, the fountains can blow one after another.
Windwick Bay in South Ronaldsay, Orkney Islands, has a spectacular spray but not a blowhole. The Candle on South Walls Island as well as the Gloup of Mull Head in the very east of the Mainland of the Orkneys, the similar gloups on the Shetlands and Trevone in Cornwall are examples of collapsed former blowholes. The blowhole of Wupatki National Monument in Arizona of course is no seawater fountain but a completely different geological formation causing blowing winds in pipe-like natural cavities.