Medamahanuwara - refuge of the Kandyan kings 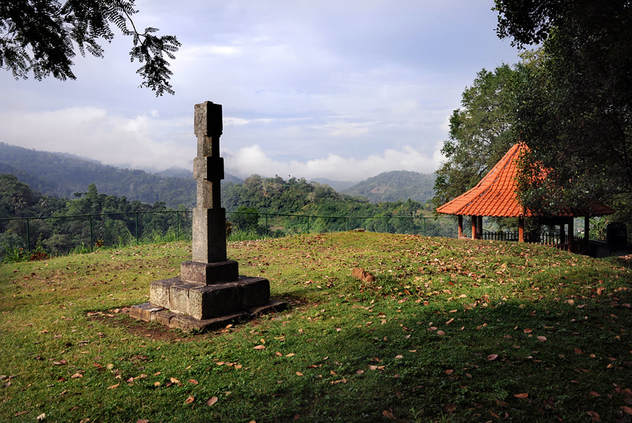 Medamahanuwara is a village 37 km to the eat of Kandy, situated at the Mahiyangana road A26 between Wegala and Hunnasgiriya. A26 is the mountain road from Kandy to Mahiyangana. A local deity named Pitiye Deiyo, identified with a non-native king who arrived as a stranger, is revered in the Hunnasgiriya area. This mountain region was reigned by a princely dynasty, until a powerful Sinhala monarchy was established in nearby Kandy in the 16th century. The Kandyan kings soon controlled the entire hillcountry and used the hidden Medamahanuwara Peak as a refuge, that's why it is sometimes called "palace" of King Senarath. The local name in the Kandy period was "Gale Nuwara", which translates to "rock city". Today‘s village Medamahanuwara is inconspicuous, though it‘s of historical significance. Just one kilometer outside the village, there is the place where Sri Lanka's last king, Sri Vikrama Rajasinghe, was finally arrested by the British. This marked the end not only of the Kandy kingdom, but also the beginning of the British colonial rule over the entire island then called Ceylon. 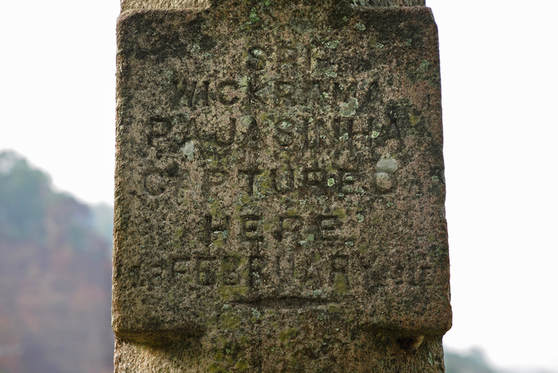 "Sri Wickrama Rajasinha captured here 18 February 1815"
In 1908, a memorial column in the shape of a temple pillar was erectedt at this rarely visited place outside the village. It bears an English inscription which says that on February 18, 1815, the king of Kandy, Sri Vikrama Rajasinghe, was arrested by the British. They soon deported him from the island. He died in exile in South India in 1832 in the fortress of Vellore, where he had been imprisoned, though comfortably, for the rest of his life.

The arrest of the king at this site in Medamhanuwara had been so important for the British governor in Colombo, that he is said to have been crying with joy. Indeed, the arrest meant the final establishment of British control of the highland area. The Kandy Treaty, which was concluded by the British and the landlords of the hillcountry, marked the end of an independent Sinhalese kingdom and Western colonial rule over the entire island for the first time in Sri Lanka‘s history,

Previously, the Portuguese and thereafter the Dutch and since 1795 the British had controlled only the coastal plains, wherea in the central highlands the kingdom of Kandy had remained independent until 1815. The colonial powers repeatedly succeeded in taking Kandy, but they could never occupy it for a longer period, as their supply lines through the mountains were again and again be cut off by Sinhalese forces using guerrilla tactics. The final success of the British in 1815 was the result of an alliance with regional princes in control of the supply lines, as parts of the nobility of the Kandyan kingdom revolted against the monarch.

What happened? The last Kandyan king executed his Adigar, a kind of prime minister, as he conspired against the ruler. Actually, this Adighara named Pilimatalava had once helped the then 18-year-old Sri Vikrama Rajasinghe to occupy the throne, hoping the young man could serve him as his puppet. But the king terminated repeated conspiracies of his head of government by executing him.

Sri Vikramasinghe‘s most remembered cruelty is the fate of his next Adigar, Ehepola, or rather the fate of his family. When Ehepola also planned a coup but then had to flee and eventually defected to the British urging them successfully to attack Kandy, his wife and children were executed by King Vikamasinghe in Kandy in an extremely cruel way.

Collective punishment and capital punishment and tortures are completely inacceptable today and shocking indeed. But it was not just a caprice of a furious king. Kin reliability was included in the laws of the Kandyan kingdom, particularly provided for traitors.

The capture of Sri Lanka‘s last king in Medamahanuwara did not take place peacefully. After the King's hideout had been disclosed, a group of Sinhalese soldiers led by the former Adigar, Ehepola, fired shots at the house, when they encountered resistance. When the the king came out to surrender, he and his wife Venkathi Rangammal were robbed, the earrings were pried away from her forcefully, her white clothes were blood-smeared afterwards. But it is said that one of Ehepola‘s soldiers treated her wounds with herbs. The clothes of the king and the blood-soaked linen of the Queen Rangammal were kept in a chest by one of the soldiers at home. In 1930, they were discovered by a teacher who had heard rumours about the whereabouts of the clothing. In 1941, the clothing, along with the bloodstains as a symbol of the violent end of the more than 2,000-year-old royalty, were transferred to the National Museum.
"Medamahanuwara" is also spelt "Meda Mahanuwara" or "Meda Maha Nuwara". The British colonial name was "Meydamahanoowera". "Mahanuwara" literally means "big city". This is an amusing name of such a small village. However, in the Sinhala language the common Indian prefix "Maha" for "big" often means a suburb within the "larger area" of a city, a suburb. For example, Mahagalgamuwa is a small village in the vicinity of the town of Galgamuwa. Accordingly, "Mahanuwara" means „Larger Nuwara“. The city called Nuwara in Sinhala is known as Kandy in English. So „Mahanuwara“ or „Larger Nuwara“ now means „Near Kandy“. However, „Mahanuwara“, „Big City“, was a name of Kandy itself in former days. „Meda Mahanuwara“ then translates to „Middle Kandy“.