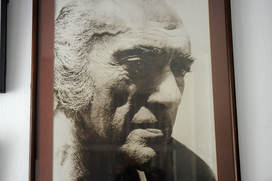 Bevis William Frederick Bawa was born in 1909. His father Benjamin Bawa was of Muslim and English parentage, his mother was of German descent and had Scottish and Sinhalese ancestors, too. Bewis Bawa became a giant in a literally sense, 2 m tall. As a young man, he volunteered for the Ceylon Light Infantry, before he settled down as an artist and continued to play a ceremonial role as an aide-de-camp to the Governors of Ceylon. Bawa was the heir of a rich father, who died in 1923. Formally, Bevis Bawa retired from the army as late as 1950, soon after Ceylon’s independence. But he had started designing his retreat, the Brief Garden within the Bawa family's rubber plantation already in 1929, when he took over the management of this estate. Bevis Bawa became mainly a landscape gardener, sculptor and painter, but he also worked as a columnist and cartoonist. In order to finance the development of his mansion and garden, he sold land of the estate. His lovely refuge Brief Garden inspired his younger brother, Geoffrey Bawa, Sri Lanka's most renowned architect, to create his own landscape garden, Lunuganga Estate since 1948, which is situated at the other side of Bentota River, in only 13 km distance by road.  ed by  and used that money to develop his residence and garden. Brief Gardens was finally completed in 1970 and two years later opened to the public by request of a befriended government official.

Bevis Bawa, who was without children, died in 1992. As he had not arranged for inheritance otherwise, the property of Brief Garden was henceforth left to his former employee, Dooland de Silva, who had been engaged in 1969 and had become manager and head gardener and landscape designer in Brief Garden before the passing away of his frien Bevis Bawa. De Silva's company Brief Garden Designs, established already during Bevis Bawa's lifetime, is a subsidiary of Brief Garden (Pvt) Ltd. The company has been involved in gardening projects particularly of high-end hotels all over Sri Lanka.

Brief Garden has been open to the public since 1972. Access to Brief Garden is usually permitted after ringing a bell. Visitors walk around in the garden area on their own, but a cartaker will accompany the guests in and around the central villa, explaining the architectural design and artefacts. 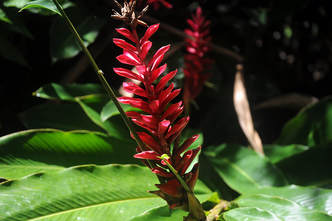 Red Ginger (Alpinia purpurata)
The garden architecture, covering about two hectares, is a mix of Italian villa garden, English landscape garde, and tropical forest with a jungle-book atmosphere. However, most of the vegetation is the result of gardening activities, many tropical decorational plants are grown in Brief Garden.

Chances are not bad to observe the endemic Sri Lanka hanging parrot (Loriculus beryllinus). Various statues are dotted around, depicting nudes in a classical Roman style as well as animals and Sri Lankan demon faces and Chinese mini pagodas. 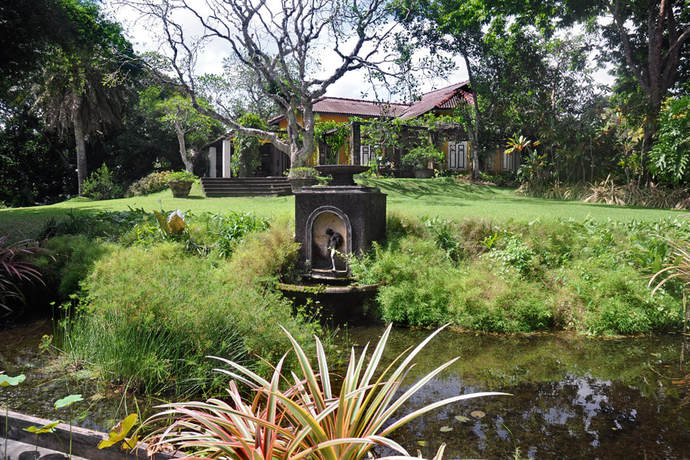 The villa is situated at the highest point of the estate and at the upper end of two diverse visual axis, one is a water garden arranged symmetrically along a long cascade, the other one consisting of flat greens on different levels. Their joint close to the villa is a small Chinese water garden

Bawa’s house, painted a soft apricot with terra cotta tiles, is designed to allows smooth transition of architecture and nature and is a blend of salons, verandahs and patios. The villa contains a private library with a collection of Asian statues as well as paintings, photographies and ornaments, some are quite imaginative, for example a double-grown coconut in the shape of a vagina.

Vivien Leigh was guest of Bevis Bawa in Brief Garden

Vivien Leigh stayed here as a guest of Bevis Bawa, who had met her at Galle Face Green. Leigh had come to Ceylon for the filming of the movie Elephant Walk. Her husband Laurence Olivier, who was originally intended to be her film partner in Elephant Walk, visited her during her stay in Ceylon only for a short period and also came to meet Bevis Bawa in 1953. Elephant Walk is a 1954 Paramount Pictures film, directed by the German-born director William Dieterle, starring nit Vivien Leigh and Laurence Olivier but Elizabeth Taylor and Peter Finch. How can this be? Laurence Olivier had been already commited to the stage play “The Beggar’s Opera” and could not leave for Ceylon with his wife. Hence, he was replaced as film partner by his protege Peter Finch, who was in fact Vivien Leigh’s lover, Olivier knowing about it. Peter Finch, known as an Australian actor, had spent much of his childhood in Ceylon. He shared an affection to South India with Vivien Leigh, who had been born in Darjeeling, India. The main character of the scenes shot in Ceylon was played Vivien Leigh, but of those in Hollywood by Elisabeth Taylor, since Leigh had to be replaced after she fell victim to an exacerbation of a chronicle mental disease called bipolar disorder. Vivien Leigh can still be seen in some long shots at the original setting that could not be re-filmed in the studios after Elizabeth Taylor replaced her.

During Bevis Bawa’s lifetimes, the Colombo high society enjoyed to meet in Brief Garden. In the course of the decades, dozens of artists stayed for a while at his estate. In 1957, the Australian artist and diarist Donald Stuart Leslie Friend (1914-89), who spent most of his life outside Australia, for instance in Nigeria, Britain, Italy, and later on in Bali, intended to come to Ceylon to meet the Bawa brothers for a week and then stayed until 1962. Friend contributed much to the fitout of the property. In particular, the large living room mural of Sri Lankan life, with a breath of Marc Chagall, was created by Donald Friend. Homoerotic drawings of Donald Friend are on display in the villa, too. Most of Friend’s drawings were studies of the young male nude, often highly eroticized.