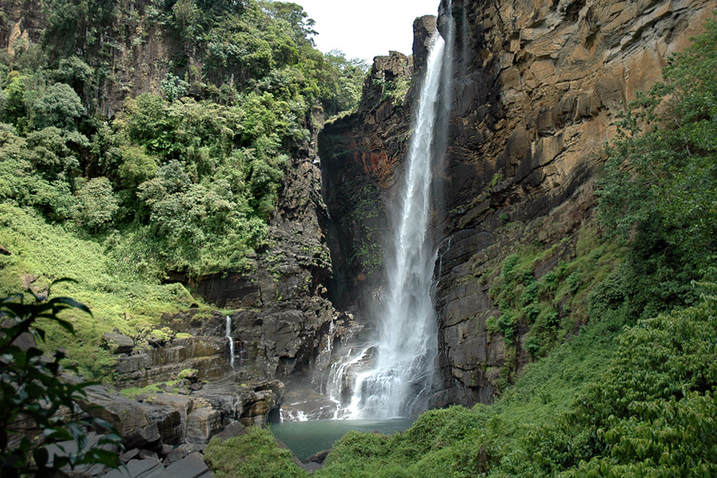 The magnificent 129 m tall horsetail fall Lakshapana Ella, also spelt Laxapana Ella, is one of the top 10 waterfalls of Sri Lanka concerning height. Lakshapana Falls is located 9 km west of Norton Bridge by road, which is a village at the road from Ginigathena Pass to Castlereigh Reservoir. The Lakshapana waterfall belongs to the village of Kiriwan-Eliya in the Ginigathena Division of Nuwara Eliya District. The small settlement situated closest to  the waterfalls is simply known as “Laksapana Gama”, which translates to “Lakshapana village”. There is a guesthouse available in the village. Not surprisingly, its name is “Lakshapana Rest”. The montane region is known as Ambagamuwa Korale. Lakshapana Ella is situated at an elevation of 660 m above sea level. The eye-catching series of peaks of the “Seven Virgin Mountains” are not far from the Lakshapana Falls.

There are various hypothesis concerning the origin of the uncommon name “Lakshapana”.  The name is presumably derived from the Sanskrit term “laksha” with a long vowel “a”. In Sanskrit, this originally means “red varnish” or “red lacquer”. In a figurative sense, this became a term for reddish ferrous stone in many Indian languages. That’s why the name Lakshapana may refer to the obvious presence of iron ore (laksha) in the cliff of the waterfalls. But “Laksha” or “lakh” with a short  vowel “a” is a common Indian term for hundredthousand, referring to the vast number of rocks and cascades above the main horsetail fall. Another hypothesis is that  the  name is  derived  from  “Lassana  pahana”, which means “beautiful lamp” in Sinhala.

An old Sinhala name of Lakshapana Ella is “Wedahiti Ella”, derived from “Wedda Hiti Ella” and meaning “waterfalls were Wedda people live”, Veddas being the indigineous tribes of Sri Lanka.

Much larger amounts of water of the Maskeliya Oya once flowed over Lakshapana Falls. But the construction of a dam has reduced the flow. The Laxapana Hydro Power Station was Sri Lanka’s first hydro-power plant, the power station is located at the old Waggama village. It originally to generated 50 MW of electricity and was upgraded to 100 MW. The waters of the Maskeliya Oya, a tributary of the Kelani river, rise from forests south of Fairlawn Estate.

Similar to the legends of Kirindi Ella and Bopath Ella, there is a local belief in a hidden treasure in the bassin below the Lakshapana Falls. The local legend goes that in times of severe droughts, a golden receptacle appears in the deep pool. As soon as this phenomenon can be seen, rain will be sent by the gods to protect the treasure again, it will come in torrents  inundating the areas below the falls in a devastating way.

Another typical Sri Lankan legend is that there are tunnels hidden behind the waterfalls, connecting Lakshapana with the Aberdeen Falls 5 km further north, as the crow flies. The Aberdeen Falls are situated in the neigbouring valley of the Kehelgamuwa river, another Kelani Ganga trivutary. There is a belief in a labyrinthic tunnel system from prehistoric times connecting all major caves and waterfalls of Sri Lanka. Again and again, there are claims that archaeological research confirmed the existence of the tunnels. But until now, nobody reached Aberdeen Falls starting at Lakshapana Falls via a subterranean way.

A more specific popular tale has ist, that Buddha mended his saffron robe at Lakshapana Falls when he was visiting the Siri Pada mountain.