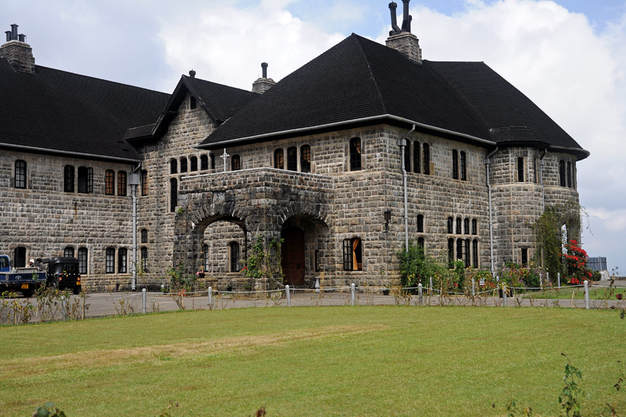 The Benedictine abbey of Adisham in the Tangamalai bird sanctuary is situated 3.5 km to the west of Haputale, at a side road branching off from the road via Boralanda to Welimada.

Besides Thomas Lipton, there was another well-known lover of ther natural beauty of the Haputale area during the late colonial period, namely Sir Thomas Villiers, who esatblished his own tea plantation. Near Haputale, Villiers built his country house in the typical historicizing Tudor style and named it Adisham after his place of birth in Kent in southeastern England. The prototype of Sri Lanka’s Adisham villa was Leeds castle in the same county. The granite building with its numerous chimneys and surrounded by a well maintained garden is a classic example of British colonial architecture in Sri Lanka.

The compound is now owned be Black Monks of the Sylvestrine Congregation. A chip of a bone of St. Sylvester is worshipped as relic in the chapel.

Due to the beauty of the garden, Adisham Hall has become a favourite weekend destination of locals. Garden and parts of the villa are now established as a museum, fireplace room, living room and a room with installations are open to the public on Sundays and fullmoon days. Most of the rooms and the prestigious staircase of Adisham Hall are not accessible, in order to prevent the monks from being disturbed.

A video documentary about the story of Villier’s life and his Adisham Hall can be seen in the lounge, where a portait of Sir Thomas Villiers is placed at the fireplace. The language of the documentary can be chosen, it is available in Sinhala and English.

Thomas Lister Villiers was born as the son of a chaplain in in the vicarage of Adisham, Kent, in 1869. His grandfather, Lord John Russel, was British Prime Minister twice. Villiers left his homeland already at the age of 18. Instead of beginning a carrrer as a businessman or politician, as expected, he was looking for adventures in tropical countries. At the time of his arrival in Ceylon, he is said to have had only 10 sterling left in his pocket. He started working as a clerk at Elbedde tea plantation in Bogawantalawa near Maskeliya. In 1896, he married the daughter of a tea planter and soon afterwards travelled to Brazil, where he stayed four years. Coming back to Ceylon with some capital, he purchased the Dickoya tea plantation. In 1905, he joined the George Steuart Company trading with plantation products. In 1928, he became the chairman of the company.

Villiers was a member of the colonial upper class of British Ceylon and also was of some political weight. After establishing his prestigious country house in 1931, he enjoyed to invite guests to Adisham, the governor being among them.

Villiers, indulged in his nostalgic passions, did not attempt to save costs when furnishing the interior of Adisham Hall. The wooden parts of the roof, all doors, window frames, panellings, stairways and floorings are made of teakwood from Burma (Myanmar). He imported furniture  and carpets as well as chinaware, glass and sterling cutlery from Englans. The chauffeur of his  Mercedes Benz had to be British.

After his retirement in 1949, Sir Thomas returned to England, where he died in 1959.

Adisham had first been sold to Sedawatte Mills in 1949. The Roman Catholic Church purchased the 4 hectares property of Adisham in 1961 and converted it to a Bendectine abbey. A small group of Black Monks belonging to the Sylvetrines suborder and about half a dozen novices have lived in Adisham ever since. They maintain guest rooms for up to 12 persons, but the monks do not enter into contacts with ordinary tourists. They prefer to live secluded and undisturbed. The Adisham monastery is well-known for its production of excellent jams, which are offered for sale in a separate showroom in the smaller outbuilding.
Why travel with Lanka Excursions Holidays?