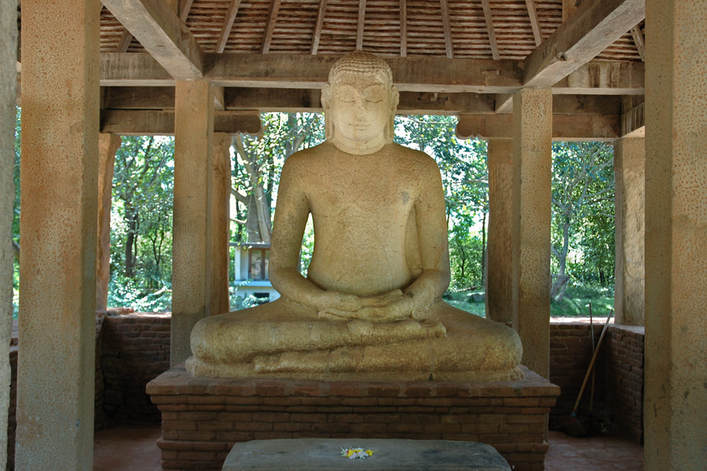 Divulwewa is a rarely visited archaeological site 36 km west of Anuradhapura and 33 km north of Ritigala, as the crow flies. It's situated close to the Hamillewa-Galenbindunuwewa road (B133), in only 250 m distance from the Komarikawala Junction, where a signboard of the Archaeological Department is posted. The village and tank of the same name (Diwul Wewa) is situated further west, in 1 km distance from the archaeological site. Don't confuse this place with Aluth Divulwewa, which is further south, closer to Yakalla.

Driving distance from my guesthouse, First House Mihintale, to the archeological site of Divulwewa  is 35 km. Divulwewa and the nearbe Kokabe are actually places that deserve to be called off the beaten path. You will never find large groups of sightseeing tourists and almost never backpackers in this area, as such hidden treasures are neither included in itineraries of big international companies nor mentioned in pocket guides. 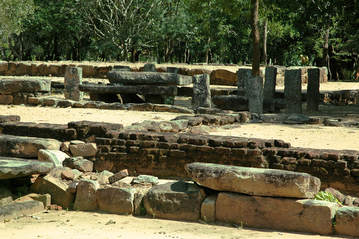 Divulwewa has an excavated ancient monastery, which is believed to have once housed hundreds of monks. The ancient name of the site is Komarikawela. Brick foundations of typical ancient temple structures such as a large preaching hall, an image house, monks's dwellings can be found on the former temple grounds. Also urinal stones and stones used for dyeing monk's robes can be seen. The most striking features are a library on stone pillars and a kitchen with a stone sink. The buidings are from the mid Anuradhapura period, from the 3rd to 6th century. Some remnants such as buildings on pillars could have been built in the much later Kandy period. 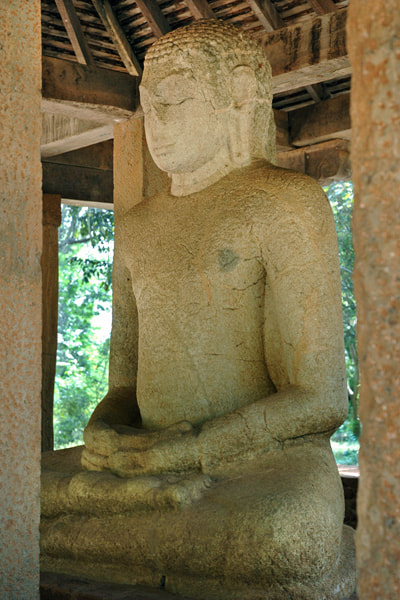 Divulwewa's main attraction is a very ancient Buddha statue carved out of sandstone, presumably from the 3rd or 4th century A.D. Known as the Komarikawela Buddha, it is one of the very few Buddha statues of this size and quality that is still in situ, now placed unter a newly constructed canopy. It's in a very good state of preservation, except from the broken nose. Almost all other Buddha statues that are of such significance and high value, are protected in museums. However, most travellers know: In Sri Lanka, there is one very famous statue of similar size still in situ, namely the Samadhi Buddha of Mahamevuna Uyana in Anuradhapura. The Samadhi Buddha of Divulwewa is somewhat its twin brother, albeit neither of the very same design.

Confusingly, a smaller statue, not far from the Samadhi Buddha and within the Abhayagiri compound in Anuradhapura, is sometimes also called "Second Samadhi Buddha", dispite the fact that it does not display Samadhi Mudra. Therefore, let's claim that Sri Lanka's one and only and true "Second Samadhi Buddha" is that in Divulwewa. The two Samadhi statues, the famous one of Anuradhapura and its brother in Divulwewa, are believed to have been carved during the same period and measure more than 2 m in height. Thereby, the Komarikawela statue of Diwulwewa, measuring 2,13 m, is one of the largest free-standing ancient statues found in Sri Lanka.

The Samadhi gesture of the Komarikawela statue of Divulwewa and its posture called Virasana are both typical of Sri Lankan Buddha statues. However, there are some uncommon features. The garment is almost invisible and, in contrast to other statues found on the island, the robe is depicted without folds. The belly is even wider than that of other Sri Lankan statues, which are more massy than classical Indian statues in general.

According to local sayings, the statue was once covered by a mound, only the head popping out. After it was discovered, a herd of wild elephants is said to have removed trees overgrowing the spot.

Next to the monastic complex is a burial site where ashes of dead monks have been overed with slabs. However, it seems to have been used even in pre-Buddhist times. Megalithic stone cists have also been found in the nearby Kokabe.

Close to the burial site is Hettuwela Tank. As mentioned, the tank called Diwul Wewa is further west.