Nilavarai Well - the Bottomless Well of Puttur on Jaffna Peninsula 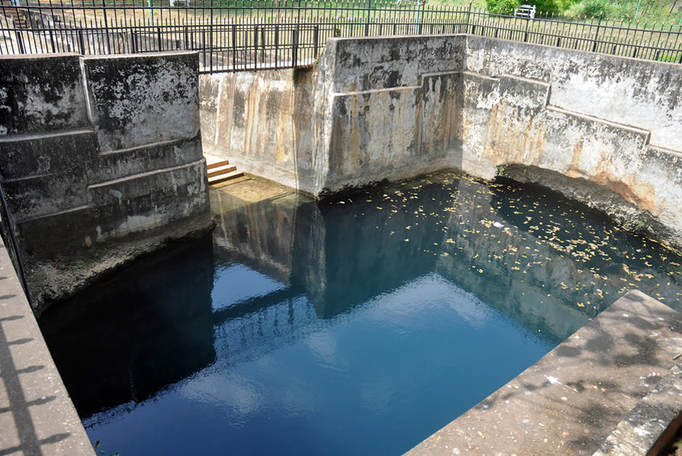 Nilawarai, also spelt Nilavarai or Nilavari,  is located in Puttur 14 kms northeast of Jaffna town. Nilawari is the largest freshwater well on Jaffna Peninsula. The water is slightly brackish but drinkable. The Nilawarai well is famous for never drying up, not even during severe droughts. Nilawarai is known as the „bottomless well“ by Tamil people. Indeed, it is 44 m deep, as H.F. Tomlin found out in 1895.. The rectangular bassin surrounded by rock surface is 13 meters long and 10 m wide. Pumping station supply water for irrigation canals now.

Nilawarai is a tidal well, the level of the water surface fluctuates a few centimeters every 12 hours. This phenomenon is easily explained by a subterranean link to the ocean. Legend has it, that there is a tunnel between Nilawarai and Keerimalai, the two most significant freshwater wells of Jaffna Peninsula.As a matter of fact, the salinity of the water is higher at the bottom of the Nilawarai well, whereas the best freshwater is at the surface. This is caused by an influx of freshwater from subterranean springs which are higher than the bottom of the well.

The Nilawarai well as an obvious miracle has been a sacred place since ancient times. The modern shrine called Navasaila Oswaran Kovil was built at an ancient site. Legend has it, that there was an ancient cave where Hindu saints led a contemplative life. A broken Buddha statue found at the Nilawarai well is now on display in the Jaffna Museum. Remnants of Buddhist and Hindu temples have been found close to the well. When the British colonial rulers attempted to establish a leprosy sanatorium near Nilawarai, the locals revolted against this plan, because they regarded this as a desecration of the sacred site.

Nilawarai is a destination of Ramayana Trail pilgrims, as its origin is connected to the arrival of Lord Rama on the island of Lanka. It is told that when Lord Rama's army entered Lanka they took positions on different sides. The army situated in the northern dry zone faced a severe water crisis. Then Lord Rama shot a magic arrow into the ground. Water sprung out immediately. Another version of the legend has it that the arrow was shot by Hanuman to satisfy the thirst of Rama.