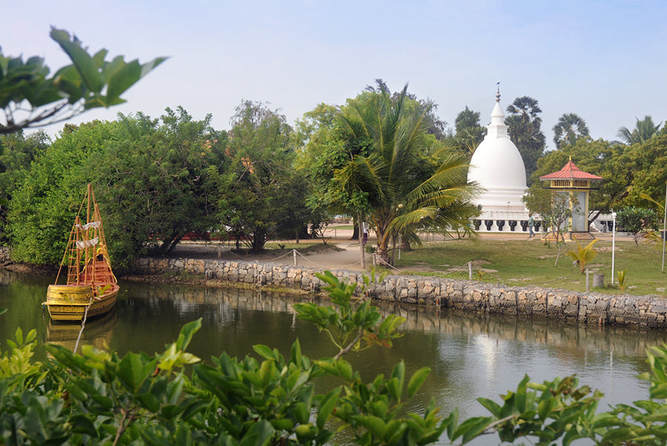 Jambukola Pattana, now also known as Dambukola Patuna or Dambakola Patuna or Dabakolapatuna, is located near the village of Madagal at the northern coast of Jaffna Peninsula, 15 km north-northeast of Jaffna city, as the crow flies. The next  Jambukola is the place where a sapling of the sacred Bo-Tree arrived on the island of Sri Lanka. A Buddhist Temple called Sanghamitta Viharaya, also known as Jambukola Viharaya or Samuddha Panasala, commemorating that important moment of Sri Lanka's religious history has been reestablished at this site, a white dagaba dominates a well-kept garden just beside the small natural harbour bay, which was the landing place of the Bo-Tree. In antiquity, Jambukola was the most important seaport of the Jaffna Peninsula, then called Nagadipa.

The Bo-Tree, also called Bodhi-Tree or Jaya Sri Maha Bodhi, is the ficus religiosus under which Prince Siddharta Shakyamuni attained enlightenment, thereby becoming a Buddha. This happened in Bodhigara, not far from the later residential city of Emperor Ashoka, Pataliputra, nowadays Patna. A sapling of the original tree was gifted to Devanampiya Tissa, King of Anuradhapura, soon after he had embraced Buddhism. According to Sri Lanka's ancient chronicles, Ashoka's own son, Monk Mahinda, introduced Buddhism to the island nation. When he established a first Buddhist monastery in Anuradhapura, it was purely male, there were still no nuns. A delegation was sent to Ashoka to ask for female ordination. The nuns mission then sent in return by Ashoka was spearheaded by his daughter, Sanghamitta Therani, "Therani" being her title "Nun". She arrived one year after her brother Mahinda had founded the first male monastery. With them, the Indian delegation braught a sappling of the Bo-Tree from Bodhighara, ti be planted in Anuradhapura. When the ship conveying Nun Sanghamitta and the sapling of the Bodhi-tree arrived, they were welcomed by King Devanampiyatissa waiting here for them and wading into the ocean when he saw them at the horizon. 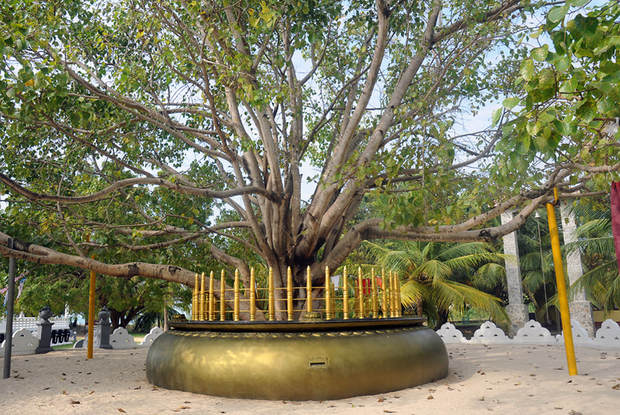 Earlier on, the first Sinhalese settlers under the leadership of Prince Vijaya arrived on the island of Sri Lanka at a place they called "Tambapanni", meaning "copper-coloured earth", due to the red colour of the soil close to the landing place. Many believe this place to be Jambukola, claiming that nowhere else red soil is so close to a beach. However, this claim is not undisputed. The area of mannar island, particularly the seashore of Wilpattua, are also considered to be that very first site where Sinhalese people lived on the island of Sri Lanka.
Jambukola Pattana is also of significance for the Hindu history of Sri Lanka. Pattini, now venerated as one of the four highest deities by Sinhalese Buddhists, is known to Tamils as Kannaki. Kannaki (Kannagi), is the main character of the most famous Tamil epic, the Silapathikaram (Silapadikaram), the "Tale of the Anklet". Kannaki destroyed the city of Madurai in southern India in retribution for the execution of her husband who had falsely been accused of stealing an anklet of the Queen. Sri Lankan Tamil tradition has it that after her revenge she embarked to Lanka and visited nine places in the north and east of the island. Jambukala claims to be one of them and the place where she first arrived.