Ravana Ella - waterfalls in Ella Gap where Sita was in captivity

The picturesque cascades known as Lower Ravana Ella, situated in the Ella Gap, are among the most photographed waterfalls in Sri Lanka, as they are located at near the main road connecting the central highlands with the southern plains: Many travellers are leaving the hillcountry along this route. 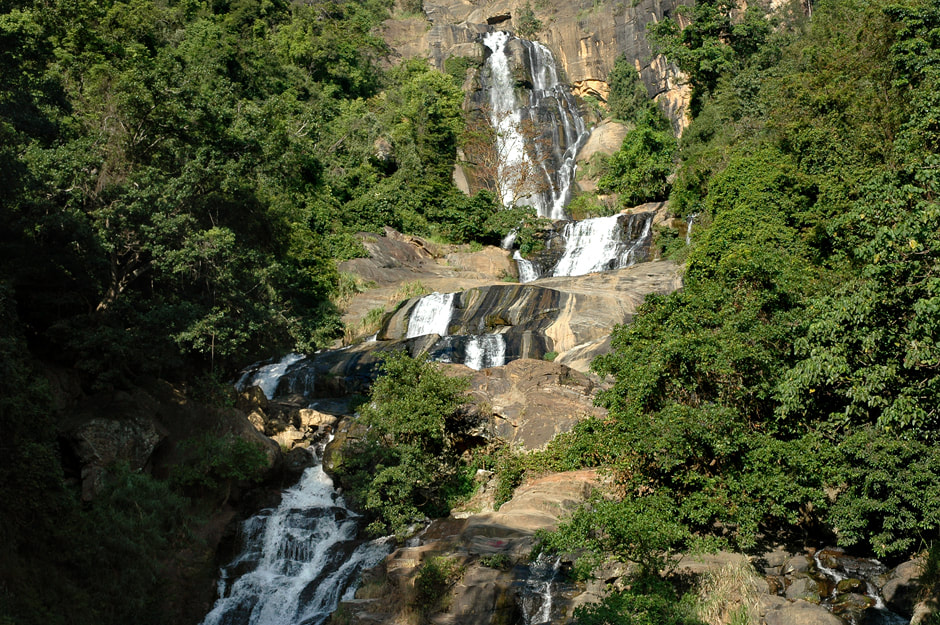 There are two waterfalls called Ravana Ella (also spelt "Rawana Ella") within the Ella Gap. The larger one is hidden in a higher altitude, not visible from the main road A23 connecting Ella and Weelawaya. In a narrow sense, only that hidden waterfall is Ravana Ella, whereas the cascades close to the road bridge are called "Lesser Ravana Ella" or "Bambaragama Ella". The latter waterfalls are worth a break for taking a picture. But be aware, there are lots of souvenir sellers at this place, and minerals purchased here can turn out to be coloured fakes. You can aslo climb up the hill, but the path is slippery.

During the local dry season (from February till April), the flow of water is reduced.

Ravana Ella is named after the legendary king Ravana of the island of Lanka, who had kidnapped Lord Rama’s consort Sita. This story is well-known to all Hindus, as the search and the battle for Sita on the island of Lanka are the core events of one of their Holy Scriptures, the Indian Ramayana epic. Though Sita's abduction was a serious crime according to Hindu laws, Ravana is not portrayed as an entirely negative figure. In the Ramayana story line, he did not try to rape her. Particularly in folk tales and other texts of Hindu mythology, Ravana is held in some esteem. For example, he is credited with healing powers. Local legend has it that Sita was held in captivity in caves behind the Upper Ravana Falls for some time.

The bridge at the Lower Ravana Ella Falls is in 5 km distance from Ella and 21 km from Wellawaya. The rock-cut Buddha sculptures of Buduruwagala and Diyaluma Falls are in 30 km resp. 34 km distance.
Why travel with Lanka Excursions Holidays?