Even outside the bounded archaeological park, there are further sites of interest, namely the remnants of the most ambitious giant tank of Sri Lanka’s Middle Ages, Topa Wewa, rarely visited ruins of Hindu temples, King Nissanka Malla’s palace with his magnificent lion throne, the “library monastery” inspired by Southeastasian architecture and an enigmatic rock sculpture of a sage. This carved statue most probably depicts the namegiving patron of the city, Rishi Pulasthi, though most tour guides will explain you that it shows King Parakramabahu the Great, who was the mightiest monarch of the ancient Sinhalese civilization. 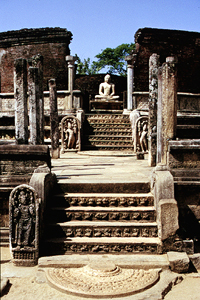 ​Inside the bounded archaeological zone, visitors can find literally dozens of temples in an area reconquered by the jungles. There is no other place in Sri Lanka giving you more of that “lost city” excitement than Polonnaruwa. Even zoologists are attracted by the jungle ruins, because here they can study the group behaviour of Sri Lanka’s endemic Toque macaques perfectly well. Several TV nature documentaries about monkeys where actually shot inside the cultural heritage site Polonnaruwa

Two works of art in Polonnaruwa’s archaeological zone can be called landmarks not only of this World Heritage Site, but of the entire island nation. One of these two landmarks is definitely the best example of a kind of Buddhist architecture that is characteristic and unique to the ancient Sinhales civiliation, namely a circuit temple with a small dagaba in its centre, a so-called Vatadage. It is part of a group of temples on an elevated terrace called "quadrangle". It was once the ceremonial centre, where the Tooth Relic was kept, the island's national relic.

Polonnaruwa’s other landmark is even more famous throughout the world. The rock-cut giant Buddha statues of Gal Vihara are not only impressive due to their sheer size but also due to their artistic and artisanal quality. Particularly the reclining Buddha is a masterpiece of Asia’s sculptural art.
In order to see all attractions of Polonnaruwa, you definitely need a full day. A normal guided tour only within the bounded archaeological area will take about 4 hours, visiting the highlights such as citadel with royal palace, quadrangle with circuit temple, Alahena Pirivena with Lankatilaka statue house, Gal Vihara with colossal Buddha statues, Tivanka statue and Nelum Pokuna Lotos Bath. Spending more than one day in Polonnaruwa also makes sense. A full day excursion can show you the beauty of Polonnaruwa’s “holy mountain” Dimbulagala at the other side of the Mahaweli river. During the summer months, Polonnaruwa is a perfect location for safaris in Minneriya or Wasgamuwa national parks to observe the world-famous “elephant gatherings”.

Polonnaruwa played an important role already in the Anuradhapura period. Polonnaruwa is believed to be the “Vijitagama”, later on “Vijitapura”, which is mentioned as one of the earliest Sinhalese settlements after their arrival on the island in the 6th century B.C.E. Indeed, archaeological evidence indicates human settlements existed in this area as early as in the 6th entury B.C.E., but maybe they are even pre-Sinhalese. Evidently, the Gopala Pabbata cave in the very centre of the archaeological zone was a Buddhist hermitage already in the 2nd century B.C.E., because its drip ledge carries inscriptions in Brahmi letters from that very early Buddhist period. In the middle of the first millennium C.E. - a period still belonging to the heydays of the Anuradhapura kingdom -, Polonnaruwa was simply known as “Kandavura”, meaning “armee camp”. The reason for a military base here was the strategic significance of Polonnaruwa’s location close to the most important ford crossing the island’s largest river, Mahaweli. This river marked the boundary of the “Royal Land” called Rajarata. The sixth century saw the rise of powerful Tamil empires in Southern India and the decline of Anuradhapura’s strength. From the 6th century onwards, the army camp was frequently used as a refuge by Anuradhapura kings, just in periods when their capital was raided by Indian invaders in search for treasures in Anuradhapura’s Buddhist monasteries and royal palaces. The chronicles mention “Pulatthinagara”, which is the Pali name of Polonnaruwa, for the first time in their report about the reign of Aggabodhi III in the 7th century. Some Anuradhapura kings, namely Aggabodhi IV in the late 7th and Aggabodhi VII in the late 8th century, resided not only in Anuradhapura but in Polonnaruwa, too. In the 9th century - which is still the late Anuradhapura time - Sena I (833-53) was crowned in Polonnaruwa and became the first king who preferred to reside in Polonnaruwa instead of Anuradhapura. Udaya I in the begin og the 10th century was the last Sinhalese who mainly resided in the official capital, Anuradhapura.

So the fortunes shifted slightly into the direction of Polonnaruwa anyway, when at the end of the first millennium the Anuradhapura Kingdom was finally conquered by the Chola invaders from Southern India. Ironically, it was the Chola rule, that decided to make Polonnaruwa the official capital of this island, which then was a province of their empire. The Chola governeurs ruled from Polonnaruwa. And this is the reason why there are so many traces of Hindu temples in Polonnaruwa, because Tamils settled in this area. And they remained to be an important factor even after the Chola occupation was terminated by the Sinhalese Prince Kitthi from the southern part of the island known as Rohana (Ruhuna). Kitthi’s final victory was the liberation of Polonnaruwa from Indian rule. When Kitthi ascended the thrown in the official Sinhalese capital, Anuradhapura, he got the royal name Vijayabahu “victory’s arm”. But only three months after his coronation he left Anuradhapura and resided in Polonnaruwa, like the Chola governeurs had done previously. Vijayabahu is counted the first king of the Polonnaruwa period. After his death, the Polonnaruwa kingdom fell into decay due to civil war within the Sinhalese nobility. It was in the middle of the 12th century, when finally the local ruler from the western part of the island gained control in Polonnaruwa and chose it as his final residence. This king is named Parakramabahu. Parakramabahu of Polonnaruwa became the most powerful king the island has ever seen. His reign is considered the Golden Age of Polonnaruwa. Never before and never after has the administration of the Sinhalese civilization been so centralized as under Parakramabahu’s rule. The significance of this king is even felt in Southeast Asia. His military expeditions turned out to be complete failures outside Sri Lanka. The chronicles keep silence about these disasters. But what is much important than his military achievements or failures, is the cultural charisma Sri Lanka gained under his rule. It was Parakramabahu who for the first time since 1000 years unified the Buddhist order. It fell apart again soon afterwards. But one legacy of Parakramabahu’s monastic reforms lasts - in more than one Asian nation - till the present day: It was under Parakramabhu that Theravada Buddhism became the only accepted school of thought in Sri Lanka and Southeast Asia. It was the Polonnaruwa period that saw the completely peaceful spread of this Sinhalese Buddhist tradition to Thailand and Cambodia, where it is called Mahavihara tradition, Mahavihara being the monastery which had been the Theravada stronghold during the Anuradhapura period and which was solely accepted for the unified order in the Polonnaruwa period.

Most of the Polonnaruwa buildings, remnants of which can be seen today, are from the reign of Parakramabahu. One of his successors, Nissanka Malla, turned out to be the last Sinhalese king who could rule in peace and control the entire island. He also left many works of architecture and art in Polonnaruwa and more comprehensive inscriptions than any other Sri Lankan monarch.

By the way: It’s not entirely clear, of Polonnaruwa was the capital during the Polonnaruwa period. Anuradhapura, though starting to fall into decay physically, remained to be a kind of “official capital” of the Polonnaruwa kings, who nevertheless resided in Polonnaruwa exclusively and kept the Sacred Tooth relic, which was formerly sheltered in Anuradhapura, in Polonnaruwa’s temple quadrangle. There is a traditon to call the town with the Tooth Relic the capital of Sri Lanka. In this sense, Polonnaruwa was the capital indeed. (But in this sense, today’s capital would be Kandy). Ironically, when the Tooth Relic was shifted to Dambadeniya and other towns in the south-west in the 13th till 16th century, many of the kings of those period tried to be crowned in Polonnoruwa - similar to Polonnaruwa kings, who had been crowned in Anuradhapura. The town of coronation was called “mula rajadhani”, “root of kingship". So, literally Anuradhapura was the root of kingship for Polonnaruwa kings and Polonnaruwa became the root of Sinhalese kingship only after the kings did not reside here any more.

Shiva Devale No.1 - of the late Polonnaruwa period

Why travel with Lanka Excursions Holidays?

+ We are a local agency owned and run by Sri Lankans, not part of international holdings
+ We are well known for our direct and personal relationships with travellers
+ We facilitate authentic meetings with locals who are not from the tourism sector
+ We follow a strict policy not to push guests to visit shops and shops and shops
+ We have an unrivalled expertise to show you places off the beaten path
+ We provide genuine information instead of clichés and tourism industry slogans