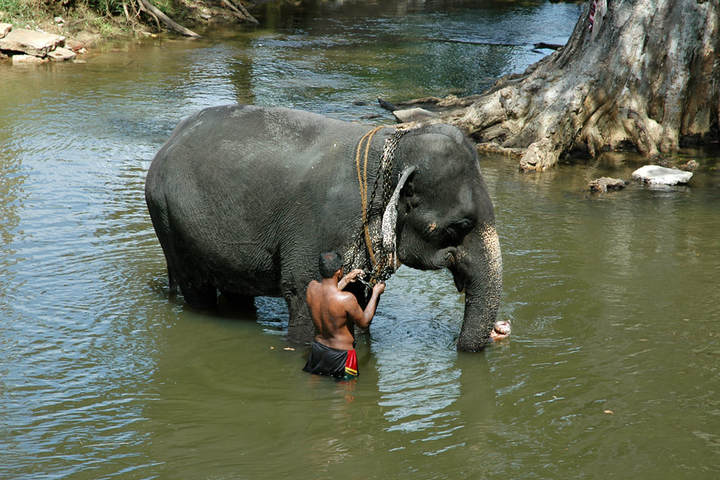 Habarana is a small city of less than 10,000 inhabitants in Anuradhapura District. It’s located right in the centre of the Cultural Triangle, halfway between Anuradhapura and Polonnaruwa and not far from Dambulla, Sigiriya and Ritigala. This is why many foreign tourists, particularly those travelling in groups, choose Habarana as their base for excursions in Sri Lanka’s cultural heartland. Habarana offers numerous mid-range hotels in the first place.

Habarana is also a the favourite starting point for safaris in Minneriya or Kaudulla National Park, famous for the annual elephant gathering of several hundred individuals. Hurulu Eco-Park to the north of Habarama has a singificant amount of elephants throughout the year and is an alternative after the Minneriya elephant gathering season.

Habarana village tours have become quite popular recently. This half-day excursion to the rural surroundings of Habarana usually includes a bullock-cart ride, explanations of paddy cultivation and impressions of protective measures against wild beasts, after a cooking class lunch in a traditional house, plus tea and jaggery from local production, and a canoe ride on one of the lakes of Habarana.

Another popular activity in Habarana is elephant back riding. At the western edge of Habarana town, close to Habarana lake in 1 km from Habarana main junction, there is a small temple from the Kandyan period, nothing amazing, but interesting for those studying traditional Sri Lankan architecture, as it is a typical Tampita temple, an image house on stone pillars. The name of the small temple is easily remembered: Tampita Vihara.

Among Sri Lankans, Habarana is well-known for its Kottu Rotti, a favourite dish of Sri Lankans. Diaspora Sri Lankans have opened Kottu Rotti snack bars in American cities. Kottu Rotti is hot meal made from a typical Sri Lankan and Southindian bread cut into peaces and mixed with vegetables, egg and spices, available with varios kinds of meat. You can compare it to mixed vegatable fried noodles, with small pieces of tradtional rotti instead of pasta.