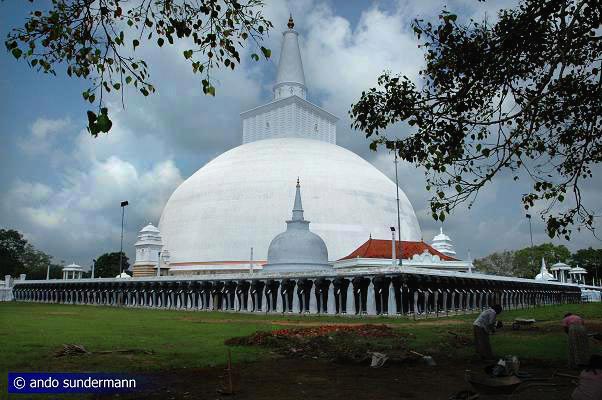 Today, Anuradhapura is a sacred city for Buddhists from all over the world. For western travellers, Anuradhapura is the largest excavation area and has the largest ancient monuments and some of the most celebrated works of Buddhist art in Sri Lanka. Indeed, Anuradhapura is one of the major cultural heritage sites and one of the most evocative places in tropical Asia at all. In antiquity, Anuradhapura was the Indian subcontinent's most important settlement south of the Gangetc plains. However, you can not compare Anuradhapura to other well-known ancient temple cities in Asia. Hampi in India, Bagan in Myanmar, Sukothai in Thailand or Angkor in Cambodia have much larger temple buildings which are in a better state of preservation. The reason is: Anuradhapura is actually one millennium older than those attractions of India and Southeast Asia. Anuradhapura had fallen into decay already before the heydays of Angkor and Bagan and before the Vijanagara empire (Hampi excavation) in southern India and a first Thai kingdom (Sukothai) even existed.

Nevertheless, even today the world’s largest massive brick structures can be seen in Anuradhapura, all of them fully restored now. These dagobas (stupas) of Anuradhapura’s three main monasteries - Mahavihara and Abhayagiri and Jetavanarama - surpass all earlier Indian examples in size, and never again have such huge stupas been built anywhere else in the Buddhist World. 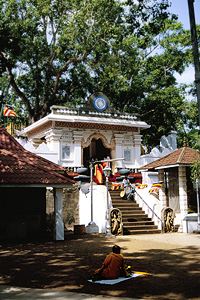 For Buddhists, Anuradhapura’s main attraction is the sacred Bo-tree. This is the earliest dated man-planted tree of the entire world. It is a sapling of the original Bodhi-tree from Bodhighara, under which the Buddha found enlightenment. Regrettably, the original Bodhi-tree in Bodhighara does not exist any more. Actually, there is a Bodhi-tree at the original place now, but the one you can see in Bodhighara today is indeed grown from a sapling of the Anuradhapura Bo-tree. So in a sense, the Buddha’s tree of enlightenment went forth and back between India and Sri Lanka, the Anuradhapura Bo-tree being in fact the oldest one still existing. That’s why the tree is so highly venerated and attracts so many pilgrims from all Buddhist countries. Anuradhapura plays an important role in Asia’s Buddhist history anyway. In the first millenium C.E. Anuradhapura’s monasteries belonged to the major centres of Buddhist schilarship and monk education besides northern India’s famous Nalanda “university” in Bihar. And there is even one more superlative for Buddhists Anuradhapura has to offer: The “Samadhi Buddha” statue is one of the most ancient and most venerated Buddhist sculptures at all. So you will understand: Anuradhapura is a great name in the Buddhist world and a pilgrimage place even today and one of the most important historical sites in Asia. Furthermore, Anuradhapura’s most ancient dagoba named Thuparama contains the very first original Buddha relics brought to Sri Lanka. So it should come as no surprise for visitors: Frequent ceremonies give Anuradhapura a religious vibrancy that’s not a folklore show for tourists but authentic Buddhist life.

However, there are also many silent and picturesque places in Anuradhapura, making a stay very pleasant for those visitors, who are not in a hurry. There a garden areas and ancient tanks and shadowy woods, strolling around in Anuradhapura can be very delightful and even relaxing. There are really enough places of interest in this huge archaeological area that are not crowded but really charming. My own guest house is a tranquil place in only 10 km distance of the Sacred City of Anuradhapura, which is the official name of the World Heritage Site and of the excavation area. Anuradhapura New Town, today’s capital of the North Central Province, is located a few kilometres south of the historal site.

Anuradhapura became the first major capital of the Sinhalese people as early as in the 5th century BCE, only a few generations after the arrival of the first Sinhalese migrants led by the legendary hero Vijaya. One of his companions called Anuradha is said to have been the founder of Anuradhagama, meaning “Anuradha’s village”, which later on was named “Anuradha’s city”: Anuradhapura. But it was the Sinhalese King Pandukabhaya who for the first time declared Anuradhapura the capital of the island. However, archaeological evidence proves, that Anuradhapura had already been the most important settlement in this part of the island already for centuries, even before the arrival of the Sinhalese.

During the reign of Pandukabhaya’s grandson Tissa, later on called Devanampiya-Tissa, Buddhism was brought to Sri Lanka by missionary Mahinda, the son of India's famous Emperor Asoka. According to Sri Lanka’s ancient chronicles, this happened 236 years after passing a way of Load Buddha.

Ever since, the Sinhalese kings of Anuradhapura oversaw the golden age of Sinhalese cultur. The city’s fame spread to the Roman empire and, even Roman coins have been found in Sri Lanka. But the wealth of the Sinhalese kingdom and the treasures of its Buddhist monasteries time and again also attracted foreign invaders, many of them only looting the city, others conquering it to reign themselves. In those periods of turbulences, Anuradhapura’s Sinhalese kings usually fled to the south of the island, this area called Rohana in the Pali chronicles or Ruhuna in Sinhalese was prooved to be a perfect place for operations to regain power in the cultural heartland in the northern plains.

Despite those interferences and wars and also sometimes insurrections of local rulers or of rivalling factions of the royal family, Anuradhapura, seeing almost 130 successive rulers, maintained its preeminent position until the end of the 10th century CE, when it was finally laid waste by Tamil invaders, making the northern plains of Sri Lanka a province of the Southindian Chola Empire and shifting the administrational capital to Polonnaruwa.

Loha Pasada - and the Bo-tree

Citadel - the fortified city of Anuradhapura

Anuradhapura Moonstone - at the Queen’s Palace

Isurumuniya temple - in the south of Anuradhapura

Why travel with Lanka Excursions Holidays?