Kalutara - with a modern huge stupa at the Kalu Ganga 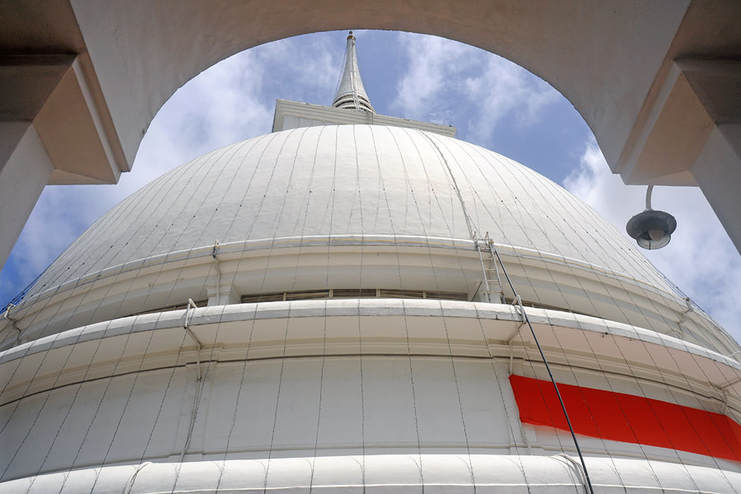 The coastal town of Kalutara is the capital of the district of the same name, belonging to Sri Lanka’s Western Province. Kalutara is situated at the river mouth of the Kalu Ganga, 45 km to the south of Colombo.

Kalutara’s main attraction is the largest dome of a stupa of Sri Lanka. This Kalutara Chaitiya is a modern structure, designed by Dr. A. N. S. Kulasinghe of the State Engineering Corporation of Sri Lanka. Gangatilaka Viharaya, also known as Kalutara Viharaya was built on an elevated platform at the river bank in the 1960s. It’s just to the south of the Kalutara Bridge. In contrast to historical Southasian dagabas, the white stupa of Kalutara Vihara is entirely hollow anf the interior hall is open to the public. A smaller dagaba is placed in its centre for circumambulation. Above the windows of the hall is a frieze of 74 Jataka paintings, Jatakas are canonical tales about previous lives of the Buddha Shakyamuni. However, many of the scenes depicted are in fact not Jatakas but stories from the last live of the Buddha and his visits to Sri Lanka as told in the island's chronicles.

Gangatilaka Viharaya is connected with Kalutara Bodhiya by a tunnel, as this Bo-tree is on the other side of the busy mainroad. This tree is believed to be one of the first saplings of the famous Anuradhapura Bo-tree. According to ancient Bodhivamsa chronicle, a first version of which was composed in the late Anuradhapura period, 32 saplings from the  Bo-tree were planted in all regions of the island soon after its arrival in Anuradhapura. This was done on the instruction of Monk Mahinda, who had introduced Buddhism in Sri Lanka. His sister Sanghamitta had brought the a sapling from the original Indian Bo-tree in Bodhgaya one year after Mahinda’s arrival. Another version of the legend of origin has it, that a Prince Wickrema Pandya from southern India planted the Kalutara Bo-tree in 1042, when he served as a local governor of the Chola empire in southwestern Sri Lanka, after it had conquered Sri Lanka.

Richmond Castle is situated at the river banks of the Kalu Ganga, too, only 3 km upstream from the Kalutara bridge. Richmond Castle is a colonial two storey mansion built by a regional governor, a Mudaliyar, named Don Arthur de Silva Wijesinghe in the early 20th century.