Sithulpahuwa - Buddhist temple and heritage site in the jungles of Yala 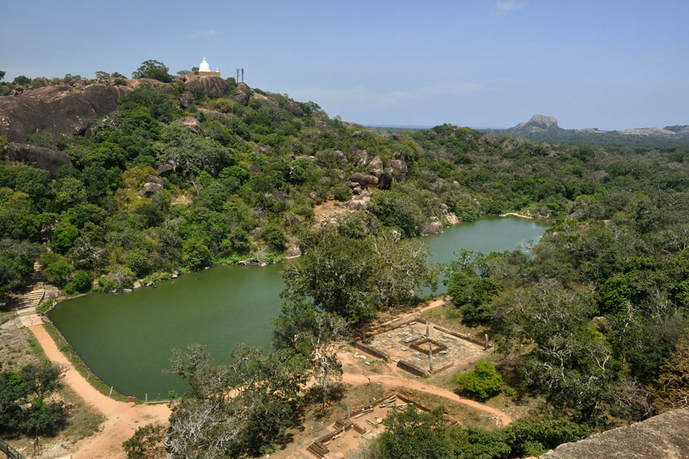 Situlpahuwa, also spelt Sithulpahuwa or Sithulpawwa, is situated 18 km east of the pilgrimage site Kataragama amidst the jungles of Yala National Park. Situlpahuwa is definitely a sight to see for those travellers in southern Sri Lanka who are interested in historical sites. Sithulpahuwa, often referred to as Chitthala Pabbhata in the ancient chronicles, was a major monastery of the southern region then called Rohana. Situlpahuwa is a highly likeable archaeological site due to the natural setting in between two neighbouring rocky ridges, which can be climbed and offer perfect views to the surrounding wilderness of Yala. Situlpahuwa has excavated temples as well as monastic caves and also some remarkable ancient statues and inscriptions. It’s not an unknown place off the beaten path. Nevertheless, the lovely site not yet overcrowded. That’s why a visit of this multifaceted and picturesque archaeological site can be highly recommended to guests who spend a night or two in the areas of Kataragama or Tissamaharama or Kirinda Beach.

In the ancient chronicles, the monastery today known as Sithulpahuwa is mentioned quite frequently under the name Chittalapabbata. The modern Sinhala name of the place is actually derived from that ancient Pali term, which literally translates to "Peace of Mind Hill".
Be aware, there are many different latinised spellings of Sithulpahuwa such as Situlpahuwa, Situlpahuva, Sithulpawwa,  Situlpawu or Sithulpahu etc.

Administratively, the archaeological and pilgrimage site of Sithulpahuwa is administratively belongs to the area of Yala National Park. However, travelers usually do not visit it on a safari, but it can be reached via a sandy track from Kataragama, without national park ticket fees and without the obligation to use a jeep with a ranger.

Sithulpahuwa is not only an important Buddhist sanctuary and pilgrimage site again but one of the historically most important sites and a highlight of heritage tours in the south of Sri Lanka. Sithulpahuwa is a typical example of what makes Sri Lanka‘s ancient sites so attractive: works of art embedded in a charming scenery. Two bright white restored dagobas on granite rocks are excellent vantage points overlooking the entire Block 1 of Yala National Park, with the ocean in the background. In between the rocks are remnants of monastic architecture from the Anuradhapura period and typical Buddhist caves and Mahayana Buddhist sculptures and - most interestingly for historians - a total of 60 historical inscriptions. They are prove of the importance of this large monastery, which had played a major role in the ancient Rohana Principality since the second century BC. All in all, no other archaeological site in the south offers such a comprehensive impression of the ancient monastic culture of Sri Lanka as Sithulpahuwa.
When visiting the south of Sri Lanka, which is known as Rohana in the Pali language of the chronicles in antiquity and as Ruhunu in modern Sinhala, the remnants of the capital of this region can be seen in Tissamaharama, the most extensive archaeological site is the Ramba Vihara, the best-preserved monastic complex with a systematic layout is the Magul Mahavihara of Lahugala, Buduruwagala has the most rock sculptures and the largest single one of the entire island, the beautiful freestanding statues are those of Maligawila, by far the largest stupa is in Yudaganawa near Buttala, and last not least the by far most impressive monastic caves can be seen at Mulkirigala Rock. However, there is reason to claim Sithulpahuwa to be the most excellent heritage attraction of the south at all, because it‘s Rohana‘s only ancient site that combines all typical elements of ancient Sri Lanka at only one place, stupas, caves, sculptures. Situlpahiwa is, so to speak, the most complete ancient monastery in Rohana. And it was probably the most important monastery in the south during the Anuradhapura period. In addition, the setting is the solitude of a wonderful a national park. That alone makes a visit of Sithulpahuwa worthwhile.

What to see in Sithulpahuwa