The average annual rainfall is between 1500 mm and 1600 mm. The rain is mainly from anti-monsoon in November and December. More than 40% of the annual precipitation is from only these two months. Altogether, the four months from October till January contribute 60% of the annual rainfall. The local dry season lasts from April till September. Lowest rainfall is in June. However, the driest period regarding water levels in the park’s tanks is towards the end of the dry season, end of August and begin of September.

The vegetation of Kaudulla National Park is similar to that of neigbouring Minneriya National Park, it consists mainly of tropical dry-mixed evergreen forests interspersed with grasslands and shrubs at abandoned chena cultivation areas. Grasslands is also predominant in at the banks of the Kaudulla reservoir, Guinea grass (Panicum maximum) and Cogon grass (Imperata cylindrica) being the dominant species.

Animals recorded in the area of Kaudulla National Park include 26 fish and 24 mammal species. The rare Grey Slender Loris (Loris lydekkerianus) has been reported and Kaudulla is Sri Lanka’s only national park where an albino Axis deer has been sighted.

In fact, there is more than one elephant gathering in Sri Lanka. Before migrating in small groups to Minneriya, large herds of elephants can be seen Wasgomuwa National Park to the south of Polonnaruwa’s huge reservoir known as Topa Wewa, particularly in April. The elephants from Wasgamuwa in the south meet with those from the north at Lake Minneriya. This is why the summer months elephant gathering in Minneriya National Park is unsurpassed considering the numbers of elephants. However, there are more elephants arriving from the north, about 250. They have to cross Kaudulla National Park, which belongs to the Sri Lanka’s main elephant corridor. Not all of them proceed to Minneriya. Many stay at Kaudulla during the dry period and join the population of more than 100 resident elephants. This seasonal herd, though smaller in size than that of Minniriya, is still impressive, about 50 or 70 individuals can be sighted bathing together in Kaudulla Wewa and feeding and socializing on the grass plains at its banks.

In October, when the raining season begins, most of the elephants return from Minneriya. Those migrating northwards cross Kaudulla National Park. Many of them stay near the Kaudulla grasslands for a few weeks before travelling further north to their destinations and homelands in densely forested areas. This is why in or around late October and early November Kaudulla has many more elephants than usual, when, at the same time, no elephant gathering takes place at Lake Minneriya any more. During this northern autumn period, herds of about 100 or even up to 200 jumbos can be seen at Lake Kaudulla every afternoon. This is actually near the size of the summer elephant gathering in Minneriya National Park. Therefore, it makes sense to call this spectacle “Kaudulla elephant gathering” or “Sri Lanka’s second elephant gathering”.

Elephant safaris should start about 3.00 p.m. and usually run for three hours. Jeep safaris booked in advance often include pick-up at a hotel in Habarana. Birdwatchers can also enjoy a ride in a paddle-boat on Lake Kaudulla. Honestly, apart from elephant safaris and birdwatching, wildlife experiences are less amazing in Kaudulla than in Sri Lanka’s larger national parks. Besides elephants, only the numbers of feral buffaloes are actually impressive in Kaudulla.
During northern hemisphere summer months, some guests prefer to see the Kaudulla elephant  gathering instead of the larger spectacle in Minneriya, because then Kaudulla is not as overcrowded with jeeps as Minneriya. Kaudulla National Park as an alternative to the “big gathering” is worth considering indeed. In order to avoid disapointments regarding experiences of  “lonely wilderness”, we should mention: Although there are actually significantly less jeep tours during elephant peak season in Kaudulla than in Minneriya, Kaudulla has become quite popular with elephant safari tourists in recent years, too. Instead of seeking tranquility, you should expect a the experiential value of an event. Then the Kaudulla elephant gathering will not be disappointed you between August and December. If you are satisfied to see only a few dozens elephants, Kaudulla will probably be a very quiet place off the beaten path during the first half of the year, particularly in May and June.

If the number of elephants matters most: Local guides and even plenty of guest house owners know where the elephant gathering takes place at any given time. As already mentioned, the best time of the day to observe big herds is the late afternoon. 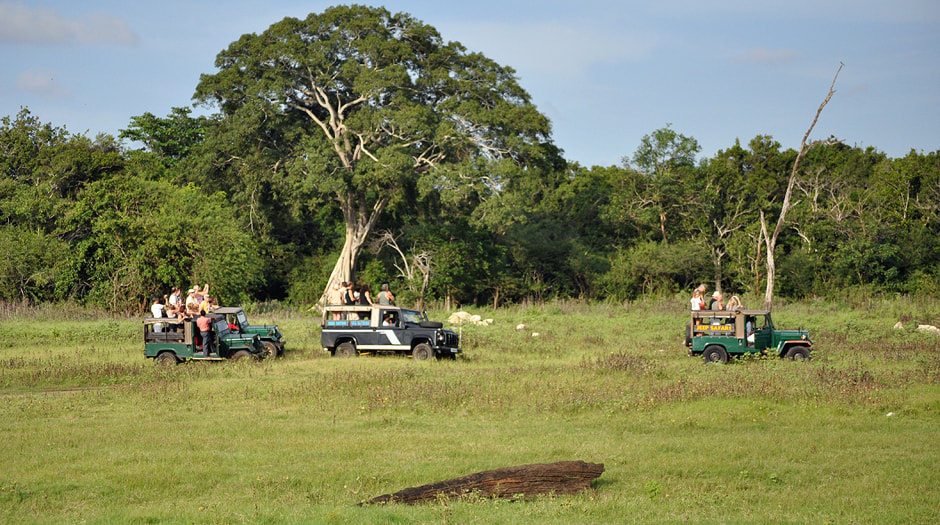 Tented safaris can be organized in Kaudulla National Park. The hotels next to the park are found in Habarana, in 22 km distance from the park entrance by road, the high end being Cinnamon Lodge and the adjacent Habarana Village by Cinnamon. Several guesthouses are available Minneriya town in just 13 km distance from Kaudulla’s visitors center.

Most probably, Kaudulla was one of the 16 irrigation tanks built by King Mahasena, one of the most remarkable kings of Sri Lanka’s history. In the chronicles, the tank is mentioned as Tissavaddamanaka.

But local legends have it, that it was actually Mahasena's sister, princess Bisobandara, (or according to other versions his wife) who constructed the tank clandestinely, with the help of a minister named Krishna. The construction work was done only during nighttime in order to avoid detection. But a speaking Black drongo (Dicrurus macrocercus) disclosed the secret to King Mahasena, who was building the Minneriya reservoir during the same period. In size, the second tank rivalled or even surpassed the royal Minneriya tank. In memory of the being that made its existence known to the king, the second reservoir got the bird's name: The Sinhala term for “Black Drongo” is “Kauda”.

In 1959, the tank was restored as part of an irrigation scheme in Ponnaruwa District. It soon attracted a variety of plant and animal life, including fish and reptiles.

Kaudulla National Park was established in 2002 to protect the most important section of Sri Lanka’s northeastern elephant corridor, in order to protect migrating elephants and to avoid human-elephant conflicts. Sri Lanka’s 15th national park is still the island's newest wildlife reserve, as smaller national parks gazetted later on have no big animals.

The establishment of Kaudulla national park threatened villagers with a loss of livelihood. This led to conflicts in the first year. Then both sides opted for a cooperative way. The villagers refrained from illicet felling of timber. On the other side, the Wildlife Conservation Department decided to allow fishing at certain times and to tolerate grazing of cattle occasionally, although it is illegal within national park boundaries and highly problematic. Depriving the elephants of their food increases the risk of movements of migratory elephants to settlement and agricultural areas and thereby causes human-elephant conflicts. But there are no adequate grasslands available as feeding grounds for the cattle of the villagers otherwise. Arrangements have been made to develop additional grassland outside the  boundaries of Kaudulla National Park and to provide the villagers with higher yielding milk cattle. 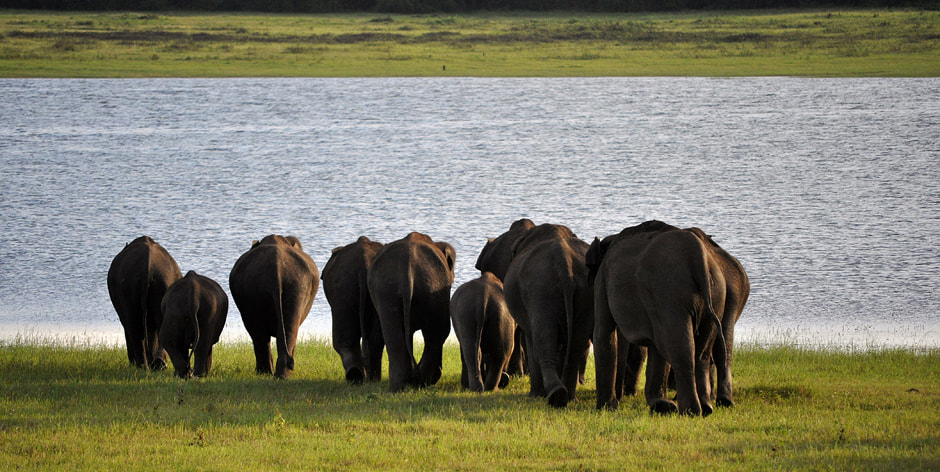