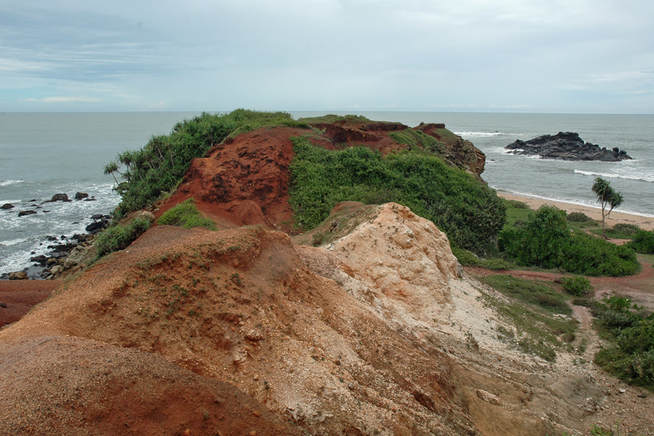 Ussangoda at Sri Lanka’s southern coast is a serpentine rock, a rare phenomenon in Sri Lanka. Serpentine soils are characterized by a low silica content, low calcium-to-magnesium ratio and high concentrations of heavy metals. Due to the toxicity and a lack of nutrients, the vegetation adapted to the extreme conditions of serpentine soils is distinct from neighbouring areas. The number of species is very low, but the rate of endemism is very high. As the largest of only four or five serpentine sites in Sri Lanka, the 300 hectares of the Ussangoda nature reserve have been declared national park in 2010. Ussangado is thereby one of Sri Lanka’s five “mini national parks”, which are not protected for their wildlife but for their particular vegetation. Locals assume, that Ussangoda is a former meteor. Recently, Ussangoda has become a Hindu pilgrimage place on the so-called Ramayana Trail, as it is believed to be the prehistoric airport of King Ravana’s mythical aircraft, which is known as Pushpaka Vimana from the Ramayana epic.