Thennadi Bay at Sri Lanka’s East Coast is a lonesome beach situated only 17 km north of the new tourist hub Passikuda and Kalkuda, just beyond a palm-covered headland called Elephant Point. Thennadi Bay is a perfect place to observe traditional beach-seining of local Tamil fishermen, the same collective technicque that is practiced by the singing fishermen of Kerala. 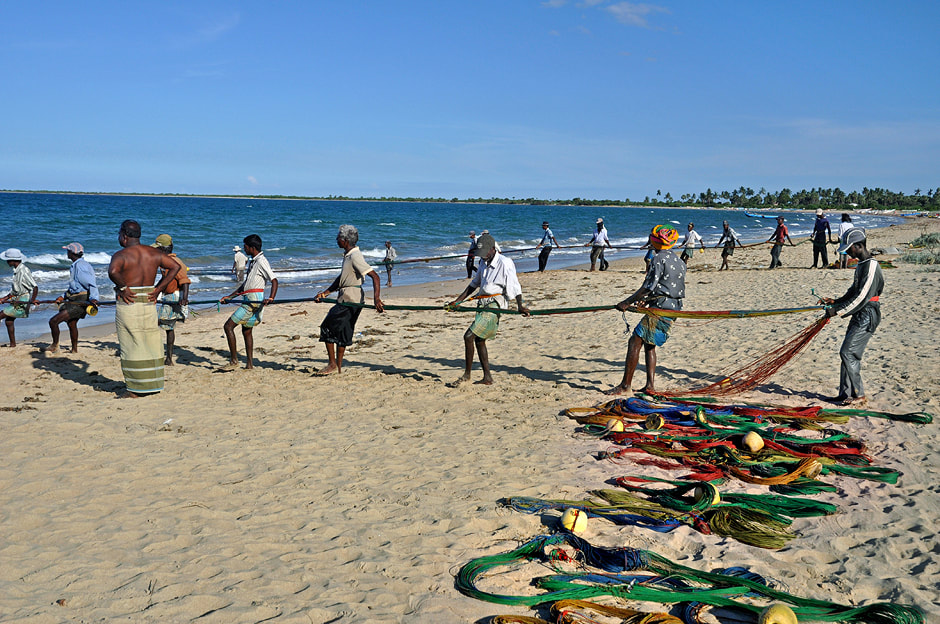 Fishing with beach seines is considered to be one of the oldest forms of net fishing, but it's also one of the most labour-intensive ones. That's the reason why this traditional technique is increasingly replaced by more modern technicques such as trwal boats, making use of fuel instead of muscular power.

Nets for beach seining are usually much more than a kilometre long. A boat drags out the net into the sea and turns back to the sea, handing the other end of the net back to the fishermen when returning to the shore. Afterwards the work of the fishermen begins, it can take several hours. Two groups of fishermen, one or two dozen persons each, pull back the rope of the net.

The front line position closest to the sea is the hardest one. This is why the individuals in a group take it in turns to move to the front position. The singing praciced by the fishermen in Kerala, a less common practice in Sri Lanka, aims at encouraging each other to pull harder.

The fishing with beach seines often results in a lot of bycatch. In particular bycatch of juvenile fish and protected species such as seahorses and threatened species such as turtles is the reason why the old technique is not considered eco-friendly nor sustainable any more.