Hikkaduwa was one of Sri Lanka's first destinations for holidays at the seaside and has long been among the most popular of the island's beach centre. The small city is situated at the southwestern edge of the Sri Lanka, about 17 km north-west of Galle. Accommodation categories range from cheap guesthouses popular with backpackers to the 4-star Chaaya Tranz Hotel run by the renowned Cinnamon Group. Chaaya Tranz was formerly known as "Coral Gardens Hotel".This landmark building of Hikkaduwa's seafront is situated on a small promontory, just at the spot where sandy beach and coral reef meet and where the former rest house, Hikkaduwa's first tourist facility, once stood.

Hikkaduwa is a popular popular beach holiday destination due to this natural coral garden stretching to the reef 500 m offshore, consisting of small islets surrounded by coral formations. The coral sanctuary is both an attraction in itself and a protection for the sandy beach. It makes Hikkaduwa one of the few beaches in Sri Lanka perfectly suitable for children, although parts of the northern beach closer to the fishing port is badly eroded. The coral reef is not as spectacular as in other parts of the tropical world. However, it's inviting to snorkeling activities and glassbottom boat rides. Occasionally, turtles can be observed here. Other highlights for scuba divers are several shipwrecks close to the reef. Hikkaduwa Coral Sanctuary has roughly seventy varieties of multi-coloured corals. Apart from that, Hikkaduwa is reputed as the number one destination for surfers at Sri Lanka's southwestern coast (in Sri Lanka only second to  Arugam Bay at the east coast, which is by far the best surfing spot, though only during the summer months). 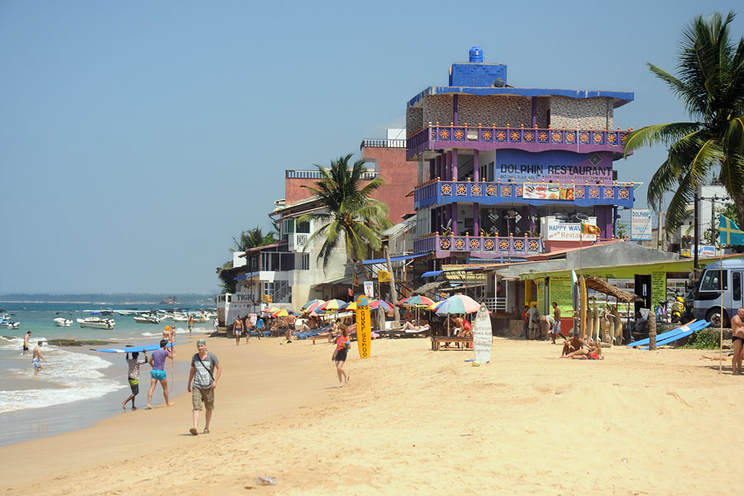 Hikkaduwa town is the area between railway station and Chaaya Tranz Hotel and its hinterland. However, the touristic area has stretched out into the adjacent villages farther south such as Wewala, Narigama, Thirangama, and Patuwatha. The distance between fishing port and Lavanga Resort ans Spa in the very south is 4 km. The backpacker paradise has now shifted to the southern boroughs of Hikkaduwa. The sandy beaches are longer and wider in this area prefered by individual travellers. However, waves are higher and underwater currents are stronger at Narigama Beach.

There are  few attractions in the immidiate surrounding of Hikkaduwa. The largest Buddhist temple is Kumarakanda Rajamaha Viharaya 500 m east of the central bus stand. "Viharaya" is the Pali and Sinhalese name for monasteries. "Rajamaha" means it was founded by a king. "Kumarakanda" translates to "prince's hill". Indeed, the temple is picturesquely situated on a mound and within a palm grove. Kumarakanda Rajamaha Viharaya may be an old place of worship, the buildings, however, are modern. The central building is an image house with a central hall and a circumambulatory. Main shrine and all chapels are crowded with gaudy sculptures and murals depicting scenes from the life of The Buddha. They were created by a single artist, who worked here during a full decade. There is no entry fee charged. Ironically, this means: visits are more expensive. Novices opening the shrine for guests will kindly lead them to the donation box and ask for a signature in the donation list. All your predecessors have donated sums at least ten times higher than a normal entry ticket. Thus be aware, you will have to pay much more than usual or otherwise lose your face. Regrettably, this is a widespread business praxis of Buddhist monasteries in tourist areas of Sri Lanka. Be careful to drop your donation into the box. Giving it into the hands of young novices who are not yet fully ordinated could turn out to be a temptation for the kids. Older monks are more trustworthy. Kumarakanda Rajamaha Viharaya is also the starting point of elephant rides in Hikkaduwa.

The fishing port is located 1 km to the north of the Coral Sanctuary, just at the opposite side of the town centre. Railway station and Central Bus Station are only in 300 m distance from the small port, which marks the northern end of the town. Walking only 2 km from here further north (or taking a tuktuk for the short trip), you can find four small attractions in the immediate surroundings of Hikkaduwa.

Boat rides to the Hikkaduwa wetlands, which are located to the northeast of the town, are operated by a small company which is based in the house at the bridge crossing the Hikkaduwa ganga river mouth, just 500 m north of the fishing port. The Hikkaduwa Ganga wetlands, a combination of a dendritic lake with mangrove swamps, are not as impressive as the much larger Madu Ganga wetlands, but the boat service is within walking distance from Hikkaduwa. Numerous birds live in the Hikkaduwa Ganga wetland habitat. Chances to observe Asian water monitors are quite high. Up to 3 m in length, water monitors are the world's longest lizards, though not the largest ones. (The biggest are the Komodo dragons, the monitors living on the Indonesian island of Komodo.)

Another 500 m farther north, situated at the seaside halfway between Hikkaduwa fishing port and Seenigama islet, is a very small Turtle Research Center, which is run privately.

Seenigama is the name of a small village and also of its island temple. The Buddhist temple, named Seenigama Muhudu Viharaya, is located only 2 km  to the north of Hikkaduwa railway station. The temple picturesquely situated on a small islet just 200 m offshore. Besides the Buddhist Seenigama island temple, there is another temple at the shores of Seenigama which is frequented by Buddhist and Hindus alike, the Seenigama Sri Devol Maha Devalaya. Theravada Buddhist laymen worship local deities for the wellbeing of their earthly life, whereas the Buddha is a supporter on the way to salvation from life on earth. A Buddhist temple dedicated to Hindu or local deity is called "Devalaya" or "Devale", two different words for the same pronunciation, which sounds like "Devalae".  The local deity of Seenigama, also worshipped  in Wella Devalaya in Unawatuna, is Devol, also spelt "Dewol". It's one of the twelve highest gods of the island. All of them are protectors of specific regions, in the case of Devol this is, not surprisingly, the southwestern lowland of Sri Lanka, the area around Galle. Devol is believed to protect fishermen and their boats in particular. The Hindu Ramayana trail legend has it that Seenigama was the landing place from where Sugriva, King of the southindian Varanas and general of their monkey armee, launched his onslaught on Ravana's demon armee in Sri Lanka.

Tsunami monument: The coastline of Seenigama was badly hit by the devastating Boxing Day Tsunami in December 2004. Part of this "desaster of the century" was the biggest railway accident in history. It's called the the "Queen of the Sea train desaster". "Queen of the Sea" is the name of the railway line from Colombo to Matara, which is running along the seashores. Another name of the railway desaster is "Railway accident of Peraliya", "Peraliya" or "Paraliya" being the name of the village adjacent to Seenigama. Only about 150 people travelling with that train survived, an estimated number of 1.700 persons (some estimates say: more than 2000) died, most of them in the last of the three waves of the Boxing Day Tsunami. The exact number will never be known. For comparison: 230 persons died in the Quintinshill accident which was the biggest British railway disaster. At the place of the largest railway disaster in history, part of a tragedy on a much larger scale, a huge Buddha statue was erected in commemoration of the victims. His Abhaya Mudra is calming the sea. The statue is known as "Pareliya Buddha", the name of the monument is "Tsunami Honganji Viharaya", as the construction was supported by the Japanese Honganji society, "Honganji" being the name of the largest school of Jodo Shinshu Buddhism and many of its temples, though referring to the temple building of the same name in Kyoto in the first place. The tsunami memorial was consecrated exactly two years after the catastrophe. Close-by, in the village of Telwatta, is a small Tsunami Photo Museum.

The main tourist attraction for half-day or full-day excursions is the Old Town of Galle to the south of Hikkaduwa. Asia's best-preserved fortified town from the Dutch colonial period is a World Heritage Site. To the north of Hikkaduwa the Maduganga wetlands are inviting to a worthwhile boat safari. Meetiyagoda Mine further inland is South Asia's most-famous moonstone mine and the only source of blue moonstones at all.

A very recommendable day-trip destinations to the north of Hikkaduwa is Madu Ganga. Boat safaris in the wetlands of Madu Ganga include visits of Cinnamon Island and a temple at the former "Island Hermitage". Fish massage is a newly intruduced tourist activity at the banks of Madu Ganga. An excursion to the Madu River can be combined with visits of the Kosgoda Turtle Hatchery and Meetiyagoda moonstone mine. 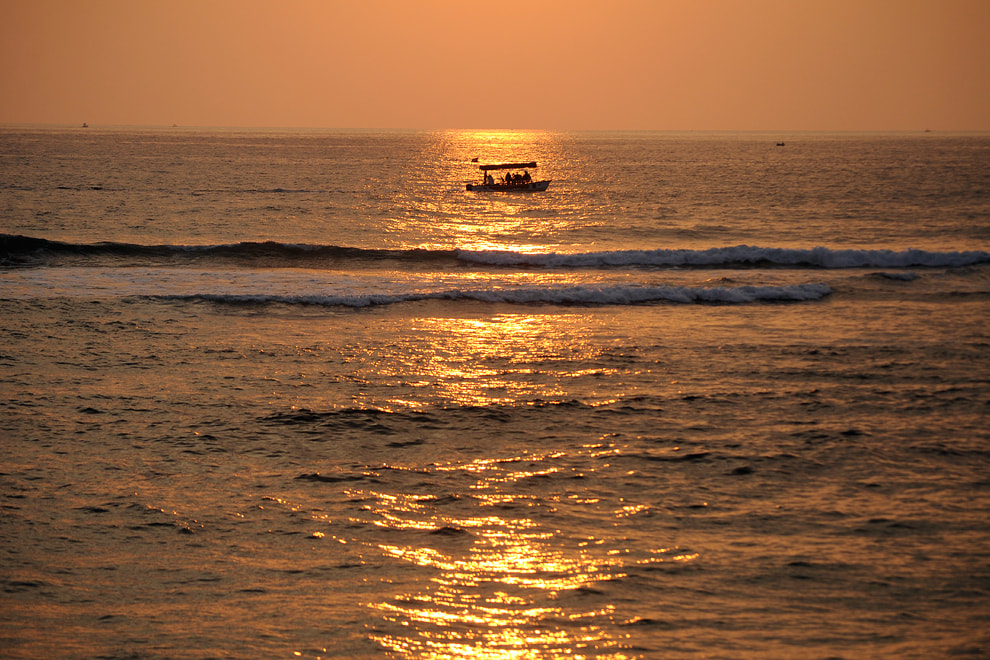