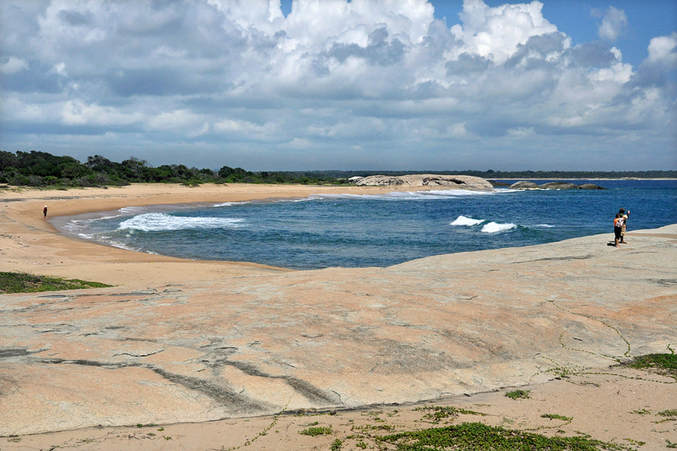 Okanda is located at the entrance gate of Kumana National Park, 20 km south of Arugam Bay. Okanda's picturesque coastline is free of hotel buildings and tourism and traffic noise and pollution, although it’s one of the island’s most beutiful beaches. However, bathing is dangerous because of underwater currents. Okanda is a sacred site, too. In July it’s a station of Sri Lanka's most significant pilgrimage, the Pada Yatra from Jaffna to Kataragama along the East Coast. Okanda is the last stage at the coast. From here ineards, the pilgrimage path crosses jungle areas before finally reaching Kataragama. Devote pilgrims stay three days in Okanda and take ritual bathes in the ocean near the temple, which is called Okanda Kataragama Devalaya, Kataragama being the name of the god known as Murugan by Tamils in India and Devalaya or Devale being a term for Hindu temples also frequented by Sinhalese Buddhists. Adjacent to the temple is the Thambiluvil pilgrimage monastery.

Apart from the Pada Yatra pilgrimage season, the remote coastal village of Okanda beach is a tranquil sandy beach. One heritage attraction nearby is the scenic Kudumbigala sanctuary, an ancient forest monastery.

Further south Okanda is not quite as perfect for surfers, but they cover their expenses here, too. Okanda beach is not obstructed, and foreign visitors are rare, although this is one of the most beautiful beaches of Sri Lanka. However,

The surge of waves and underwater currents should not to be underestimated. Holiday makers should not swim out into the open sea. A lifeguard is not available at this lonely beach.

There are no hotels or guesthouses in Okanda. The only place to stay for those who do not find private accommodation are some rooms that are commonly used by pilgrims at the temple. A Tamil shop with a small restaurant for Sinhala and Tamil guests is close-by. The cuisine is a purely local, of course.

In cooperation with locals, Lanka Excursions Holidays can arrange private stays for guests who are willing to accept the living conditions of locals as their holiday accommodation.

In the nearby village of Panama, pronounced “Pa-neme”, the Sri Lanka Navy maintains a guest bungalow. Tourists are allowed to use their rooms, too, but reservation is very difficult because the bungalow is frequently used by Navy personnel.

Both Okanda and Panama are perfect starting points for safaris in the Kumana National Park. It is very similar to Yala, but much less frequented by tourists. This is why wildlife expeditions in Kumana are among the most authentic you can do in Sri Lanka.

A half-day excursion to the rock monastery Kundumbigala situated close to Okanda Beach and Kumana National Park is highly recommendable. In Kudumbigala, chances to observe wild bears just outside the national park boundaries are not too bad, particularly in July and August.
Why travel with Lanka Excursions Holidays?