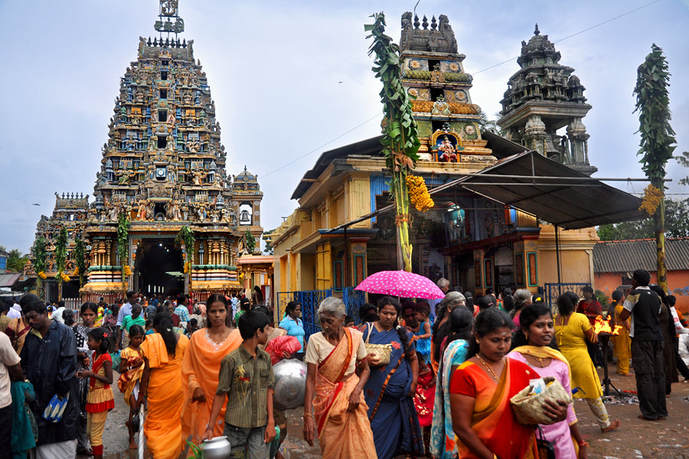 Pathirakali Amman Kovil, Kali temple in Trincomalee
Trincomalee, also known under the acronym Trinco, is a coastal town of historic importance, since it has the very best natural harbour at the Gulf of Bengal. It’s the port of Gokanna known from Sri Lanka’s ancient chronicles and was fiercely contestet between various colonial powers, the Portuguese and Danish and Dutch and French and British. For traveller’s, the main attractions are situated on a headland to the east, namely Fort Frederick from the Dutch colonial period and, at the tip of the same outcrop known as Swami rock, Sri Lanka’s most revered Hindu shrine. The Konneshvaram temple is one of the five Ishvarams which are the most sacred Shiva temples in Southern India and Sri Lanka, all of them not situated on the subcontinent’s mainland. The original medieval Konneshvaram temple was destroyed by Portuguese Christians. It was rebuilt in the typical gaudily colourful style of Tamil temples. The beaches in the surroundings of Trincomalee have become popular tourist destinations. Trincomalee is also the starting point for whale watching tours at Sri Lanka’s northeastern coast.

Location and Significance of Trincomalee