Manakanda - excavation of a meditation monastery off the beaten track 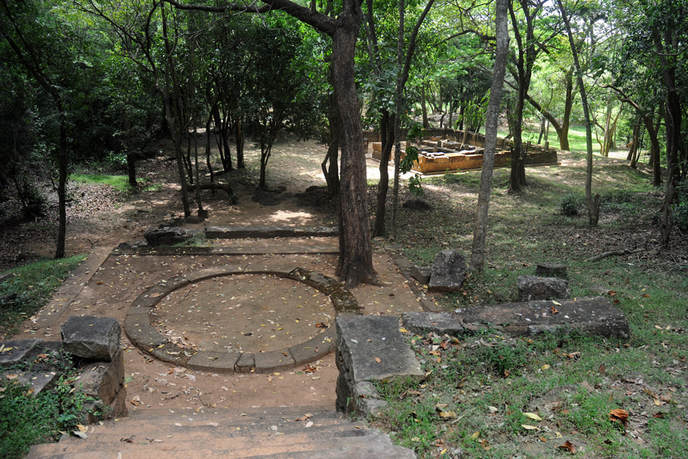 When you are visiting Sri Lanka’s Cultural Triangle looking for a lovely heritage site completely undisturbed by the crowds, Manakanda is such a destination off the beaten path. Surprisingly, it’s situated in the very centre of the most visited heritage zone, in only 4 km from the Maradankadawala junction where the roads from Anuradhapura and Kandy (A9) and from Polonnaruwa (A11) meet. Almost all tourists travelling from Anuradhapura to Polonnaruwa or Sigiriya or Dambulla come along Maradankadawala, but almost none of them finds his way to the enchanting ruins of Manakanda, as it is neither included in big company’s itineraries nor mentioned in independent travellers’ standard pocket guides.

Manakanda is an excavation of a typical Pamsukulika monastery, quite similar to Ritigala, which is mentioned in every pocket guide. Ritigala is in only 22 km distance by road or 13 km to the east, as the crow flies. Manakanda is both the name of both the heritage site and the small north-south oriented ridge. Manakanda hill can be seen very well from the mainroad. You will find the Department of Archaeology’s board at the Maradankadawala-Ipalogama side road. The villages Ipalogama and Gonapathirawa are located at the opposite side of the Manakanda hill. It reaches an altitude of 381 metres above sea level. The view from the ridge is quite scenic. You can see the ranges of Ritigala to the east and Mihintale to the north.
The ancient forest monastery of Manakanda was excavated by Gamini Wijesuriya, Director of Conservation of the Department of Archaeology. Manakanda is believed to have been founded as a monastery in the earliest Buddhist period of Sri Lanka, the 3rd and 2nd century B.C., although drip ledge inscriptions found at the caves of this hill are from later centuries, as they mention names of regional leaders, which was uncommon in the earliest Buddhist period but became common in the first centuries A.D. Howerer, most of the 70 ancient structures, ruins of which have been found here, are from the late Anuradhapura period, from the 8th or 9th century A.D, because they were typical Pamsukulika buildings, most of them so called Padhanagaras. Temple complexes of this type, such as Ritigala and Manakanda, are called Pamsukulika or Padhanagara monasteries.

Pamsukulikas are one specific group of forest monks leading extraordinarily austere lives. They practiced additional asthetic rules that are not mandatory but permitted by the canonical scriptures. One such rule is not to accept garments as donations but instead use cloths of the expired which were found at burial places. This latter practice is called Pamsukulika in a narrow sense. Pamsukulika forest monks accepted visits of pilgrims, but they did not provide objects of veneration for laymen, no works of art at all. They only accepted veneration of the Sangha as such, this means veneration of the order of monks. Pamsukulikas, though forming a reform brotherhood, were not a schismatic sect in conflict with other monks or monastic groups. Institutionally, they remained to be attached to the large monasteries, forming one highly organized branch, besides scholars living in large monasteries, priests living near or in villages and more traditional groups of reclusive or meditating monks in forests. Not all forest-dwelling monks of the Anuradhapura period were Pamsukulikas! Surprisingly, Pamsukulikas formed much larger groups at one specific place than ordinary forest monks.

Padhanagaras are double platforms, consisting of two square-shaped platforms connected by a narrow bridge. The structure of such a meditation platform, also found in Ritigala, Arankale, Veherabhandigala and Anuradhapura’s Western monasteries, is also called Pathanagara or Padanagaraya. Pathanagaras are unique to Sri Lankan monastic architecture. According to Wijesuriya, a Padhanagara may have been a living quarter of monks, devided into a platform with a roofed Kuti, which served as a monk’s dwelling, and a meditation platform in front of it, which was roofless and only filled with sand. However, monks usually lived in caves or in huts built of perishable materials. Stone monuments are usually ritual buildings. Possibly, in the case of the Pamsukulika monasteries they were both. Devotees visiting the monks could have venerated the abode of a living monk here, instead of Buddha images, Bodhi tress or stupas, which were absent from Pamsukulika monasteries. This would explain, why there are ambulatories surrounding some of the double platforms.

As mentioned, stupas and Buddha sculptures and Bo trees – all the typical features you would expect to find in an ancient or modern monastic complex of Sri Lanka, are not found in Pamsukulika monasteries, because relic or image or tree worship was not practiced by monks of this reform brotherhood. But besides meditation platforms, there are two more typical features of a Pamsukulika monastery, namely a quite large bathing pond bordered by stone steps similar to Indian Ghats and so-called hospitals for Ayurvedic treatments of the monks and maybe also for hot-water treatments. They are called Janthagaras or Janthagarayas.

The Janthagara is the first building you will see when entering the archeaological site of Manakanda. Typically, it has a flat bassin in the centre. You will find grind stones, so called Ambarum galas, which were used to prepare herbal treatments.

The bathing pond is in the narrow valley between the first small ridge you climb and the main ridge of Manakanada. Pokunas belonged to almost all monasteries, many of them were elaborate. Bathing ponds of Pamsukulika monasteries are larger in size, presumably they served not only for the monks but also for bathing rituals of laymen. The Pokunas of Pamsukulika monasteries are partly carved out of the rock, partly bordered by huge stone slabs. Manakanda has the largest such archaeological pond yet found.

Another typical element of a Pamsukulika monastery is the so-called meditation path connecting the hospital with the pond and the Padhanagharas. Indeed, walking was a meditation technique. Not only meditation platforms but also meditation paths were partly built of stone. Like in Ritigala, a circular flat form can be seen at a slope, they are called rest station. Presumably, they served for some ritual circumambulations interrupting the walk uphill.

Visitors should be aware Manakanda is a wildlife area. An experienced guide should help to avoid conflicts with wild elephants. 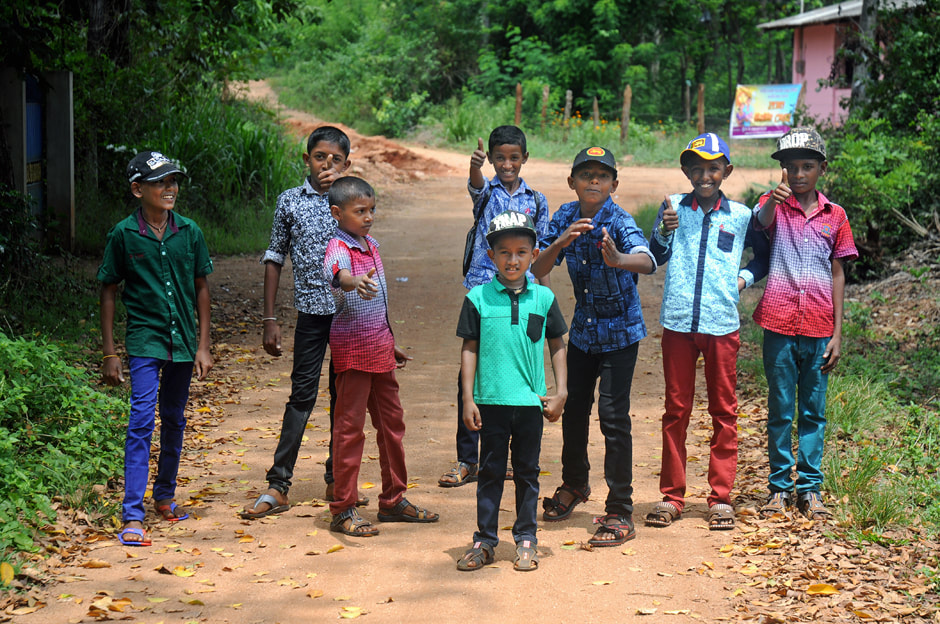