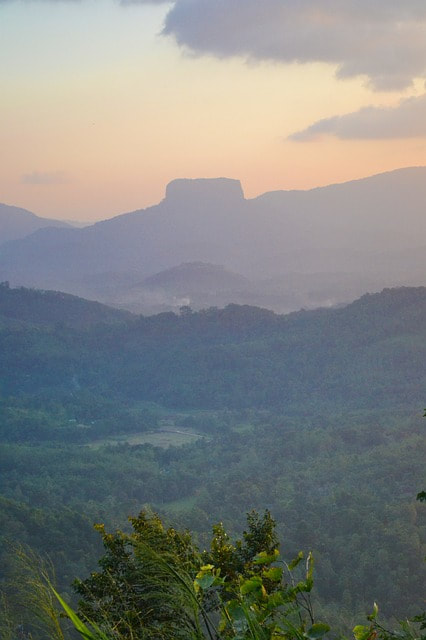 Bible Rock Bathalegala, also spelt Batalegala
The Bathalegala mountain, rising to a height of 798 m above sea level, is situated near Aranayake in Kegalle District, Sabaragamuwa Province. People travelling on the A1 mainroad from Colombo (or the Bandaranaike Airport or Pinnawela Orphanage) to Kandy will remember the serpentine road with the steepest gradient, approximately 20 km away from Kandy. This historical pass and the nearby village uphill are called Kadugannawa. From Kadugannawa pass you enjoy a wonderfull view to the western highlands. Bathalegala is the the most striking mountain in this scenery, due to its prominent vertical cliffs surrounding flat top surface. Bathalegala (also spelt Batalegala) Kanda was known as “Bible Rock” in the colonial period, because this table mountain resembles an open book or inspired fantasies of how Mount Sinai could look like.

When the Kandy kingdom was threatened by the Portuguese, who were in control of the lowlands in the 16th and early 17th century, the Sinalese set up a chain of watchtowers on the most conspicuous peaks, beginning with Batalagala. The watchers on top of Batalagala could easily monitor the Kegalle valley and Kadugannawa pass on the way from Colombo to Kandy. Their alarm system was a bonfire to be seen from the next mountain, the chain of bonfires ended at Bahirawakanda, the hill closest to Kandy.

Considering the shape of the “Bible rock”, it may seem impossible to have a hike to the top, but there is a trail managable without alpine climbing, indeed there are two.

The normal way to reach the foot of Bathalegala Mountain is the branch road B278 from Mawanella (at the A1 main road). After ten kilometres, this minor road B278 turns right at the junction in Gevilipitya. At Bathalegala junction in Hathgampela is a board showing the small road to the Bathalegala Kanda. The first kilometer is paved. At its end there are several houses and even a small shop. Starting from here, the hike to the summit takes about 2 hours at a leisurely pace. Behind the the last houses is the trail head. The first part of the tiny footpath leads through a forest and a deforested area. At the rocky steepest part of the trail hands must be used, but mountaineering experience is not required. There are steps carved in the the rock surface. Nevertheless, it is not without risks, because the rocks are slippy after rainfall, and the tour is dangerous recommendable during thunderstorms, Bathalegala Kanda is known to be struck by lightnings more often than usual. Furthermore, it is usually very stormy on the rock.

However, on a sunny day nature lovers will enjoy the climb, not only because of the rewarding panoramic views but also due to the experience of changing vegetation and great bird watching opportunities.

The mountain panorama on the plateau of the rock is most the most amazing experience, of course. In case of good weather conditions the entire Knuckles Range can be seen in the north-east, the Ambuluwawa Peak with a modern pilgrimage site on top of it is closer-by in the south-east. In the nearer surrounding ara satellite hills such as the sacred mountain Devanagala Kanda in the north-east and Uthuwan Kanda in the north, which is also a lovely destination for hikers and more easily to reach, only half as high. In the south-east is the Ura Kanda, where M.H.M Ashraff, the founder and leader of the Sri Lanka Muslim Congress, died in a helicopter crash.

The summit has been transformed into a Buddhist place of worship and a forest retreat (Aramaya) for reclusive monks, though usually not inhabited, with cave abodes and a small dagoba. For the future, a dagoba dome of the size of the record-breaking Kalutara Chaitiya is planned. But a cable car was planned a decade ago and never completed, some pillars belonging to this abandoned project can still be seen.

In case you travel with Lanka Excursions Holidays, we could organize pick-up servive from a different place allowing you to use the western trail from the top of the "Bible Rock" to Lambutuwa.