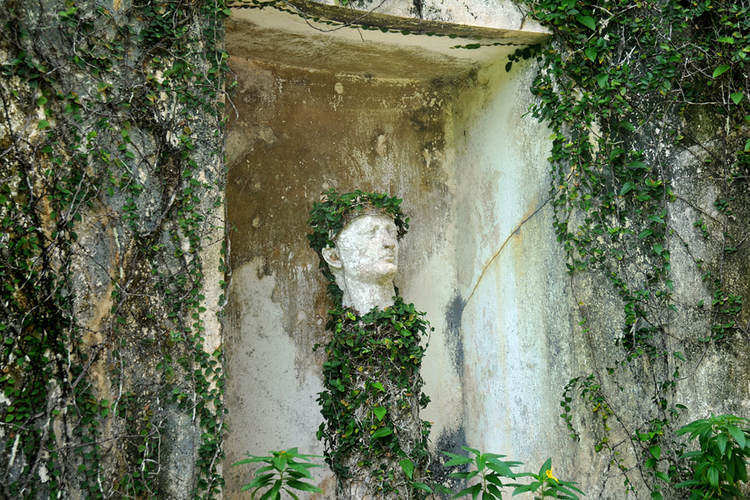 Lunuganga Estate was the country home of Geoffrey Bawa (1919 – 2003), who was definitely Sri Lanka’s most prolific architect. Inspired by the Brief Garden of his elder brother Bevis, Geoffrey Bawa in 1948 launched his first landscaping gardening project in Lunuganga. In a way, this was a starting point of his career as one of Asia’s groundbreaking and most celebrated modern architects. Geoffrey Bawa had previously worked as a lawyer. After he had failed to purchase an Italian villa, Bawa hoped to develop a mansion and gardens in an Italian style in Sri Lanka. In 1949, he purchased 10 hectares he 6 hectare property on the peninsula in Lake Dedduwa for this purpose. The land had been a rubber plantation during the British colonial period and earlier on a cinnamon growing area under the Dutch. Bawa's lack of expertise in constuction works and lack of interest in practicing as a lawyer motivated him to undertake a second course of study in England, then to graduate in architecture. After returning to Sri Lanka, he lived and worked in Colombo most of the time, while Lunuganga was his weekend retreat as well as his residence to receive guests. Bawa continued to develop his private landscape garden, until his second stroke forced him to stop all works in 1998, shortly after Prince Charles had been his guest on his beloved estate. During half a century, Lunuganga had served as Bawa’s experimental laboratory for new ideas. Since he passed away in 2003, the estate has been administered by a group of his friends, who form the Lunuganga Trust, which had been set up already during Bawa's lifetime. The same group founded the Geoffrey Bawa Trust. 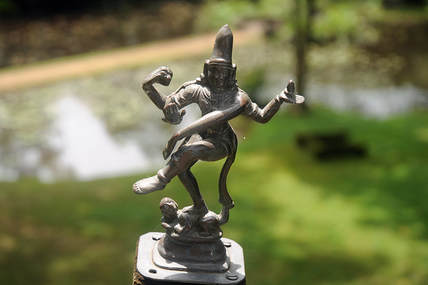 Lunuganga Estate with the garden architecture, of which Bawa was exceptionally proud and which served as his inspiration, now welcomes the public. The buildings on the estate serve as a country house hotel called Lunuganga Country Estate. Other visitors are allowed to visit the garden after buying a ticket and joining a guided tour. Most parts of the garden can be seen on the tour, only some areas are reserved for hotel guests to remain undisturbed. 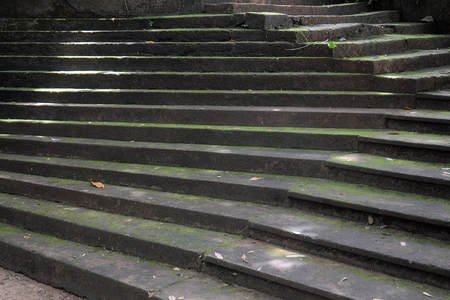 After ringing the bell at the front gate of Lunuganga Gardens, you will have to wait for a caretaker. For those guests who did not reserve a room for an overnight stay, it’s not permitted to visit Lunuganga Garden without guiding. During off-season (May to November), it can take some time before your ringing is noticed. The guide will bring you to the ticket counter which is further uphill. It’s at the Entrance Court from, which was built already in 1947. It is framed by a an elegantly curved stairway leading to the mansion reserved for hotel guests and a portico with an upper floor glass room, which is a later addition. It was built in 1980 to replace an carport with a coconut-leaf thatch. The Glass House is one of the places that is rented out to guests for overnight stays. 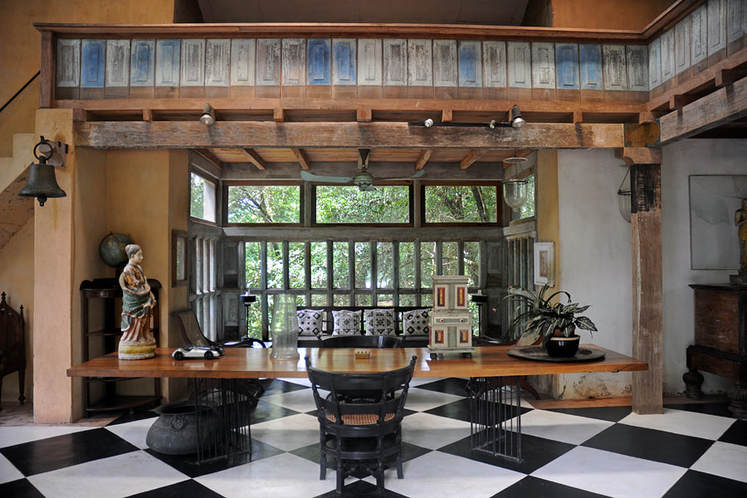 At the opposite side of the portico is Bawa’s Garden Room, though used for keeping gardening tool, it was also one of Bawa’s work places. The large hall is built in a country-house style, a typical example of the tropical Modernism Geoffrey Bawa is famous for, using materials from the surroundings. The interior of the Garden Room is furnished in a Dutch-period style. The wooden tabletop appears to be of record-breaking size. 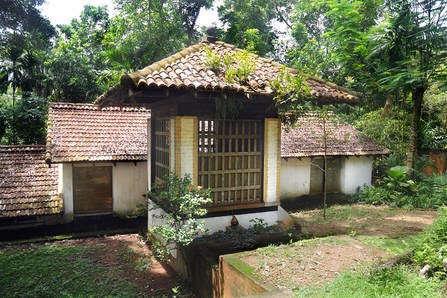 The nearby studio, built on three levels at a slope, is one of the spaces that one can stay overnight in. That's why entry is usually prohibited for day-trippers. This place originally served as chicken shed and cow barn. Bawa used ancient blue painted doors as well as shutters found on demolition sites in Colombo. Bawa’s former atelier is filled with artefacts from around the world. A stairway leads to a  downstairs sitting room, the walls of which display architectural blueprints of some of his most famous works, such as Heritance Kandalama Hotel near Dambulla. A private outdoor courtyards is attached to the studio. Traditional courtyards and old doors and windows are characteristic features of Bawa's modern architecture. 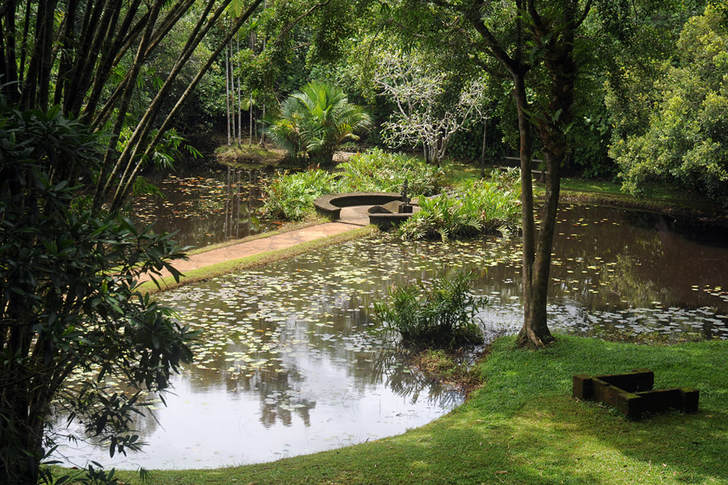 Just in front of the noble garden room and atelier is the Red Terrace, which is named after the colour of the laterite surface. It was Bawa’s favourite place for open-air lunch, due to its view to the water garden further below. A bell to call servants is adjacent to the table. 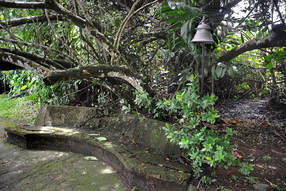 Walking down the steep stairway, which can be quite slippery after rainfall, the visitor arrives at the so-called butterfly pool. At the eastern end of this water garden is the Black Pavilion with a stone bench. It’s situated at the eastern end of the so-called Broad Walk. Due to its view along this axis of the water garden, the Black Pavillon was Bawa’s favourite place for tea. 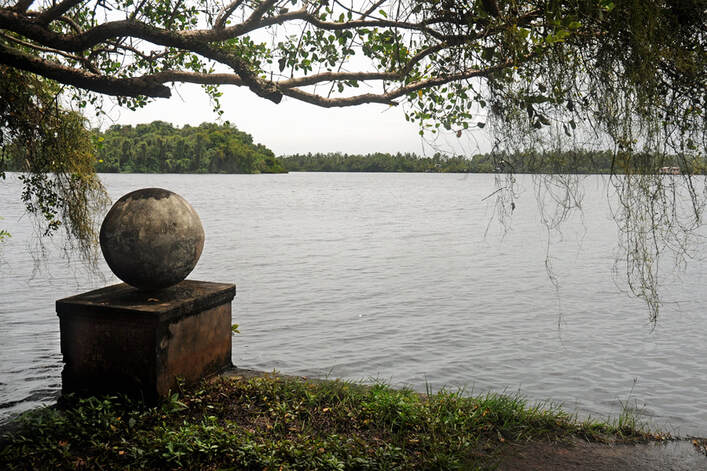 The Broad Walk leads to a bank of Lake Dedduwa which is called Water Gate. It is used as departure point for hotel guests’ boat tours to the islets of Appaladuwa and Honduwa. The bank is designed in a checkerboard-pattern, a typical element of Bawa’s architecture. 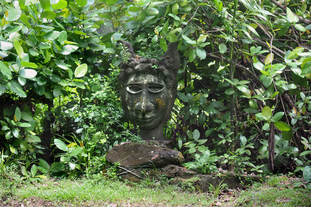 The nearby mask of a horned Pan was sculptured by a Tamil assistants of Bawa and called "Hindu Pan" by him. 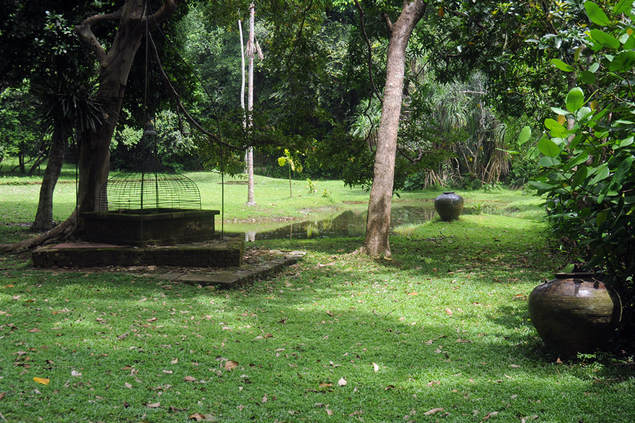 The trail then leads to a plain at the western side of the estate houses’ mound. This flat jungle stretch with a pond and a well is called the Plain of Jars, as large clay pots in the Ming dynasty style dot this part of the park. 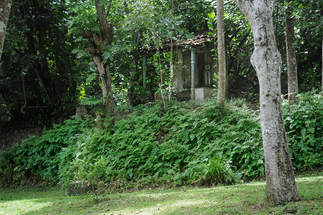 At the slope of the estate hill is a small and simple summerhouse, now rather weathered, which is called Blue Pavilion, just overlooking the Plain of Jars. 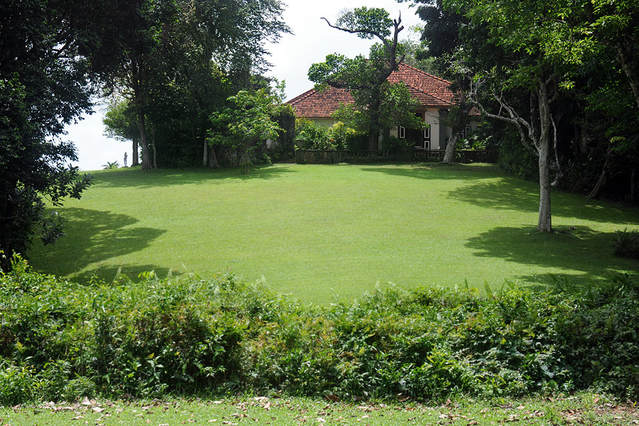 Climbing up the estate' hill from the Plain of Jars, the main mansion is to the left and the wide central lawn opens to the right, in southern direction. An central axis through the salon and corridors of the villa connects the green and the terraces at the steep northern slope of Cinnamon Hill. It is designed as vista to both directions. Lake Dedduwa can be seen close-by in the north and at the horizon in the south, as the estate is located on Dedduwa Wewa. Lunuganga, meaning “salt river”, is not the name of the lake, but of the estate. Originally the mound now known as Cinnamon Hill was higher. Bawa had the top carried away and levelled it in order to enjoy the views to the lake in both directions in a perfect angle, allowing to see the shimmering of the water. Bawa’s concept was to create a garden within a larger garden, the latter being the natural surroundings of the estate. 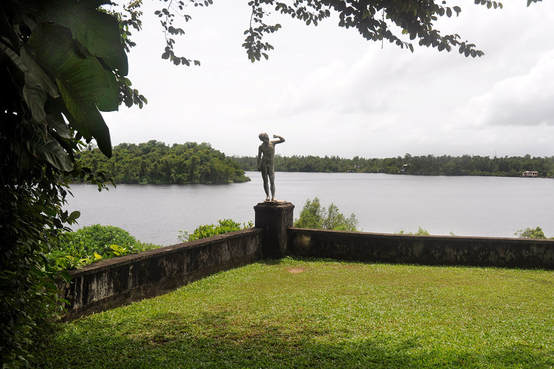 The main plantation house, a low series of Modernist cubes with traditionally tiled roofs, is not open to the public. It’s exclusively reserved to hotel guests. However, the northern terrace (sometimes called western terrace, as it is actually situated to the northwest of the main mansion) can be reached through a flight of garden pavillons at the western side. They are designed in classicistic style of an Italian villa’s landscape garden, which in turn imitated the garden areas of ancient Roman palaces. Core elements are a combination of walls, patios and greens, sculptures in a classical style and views from the terraces high above the steep slope. Regrettably, many benches are covered with moss, not any more inviting to sit down for a while. 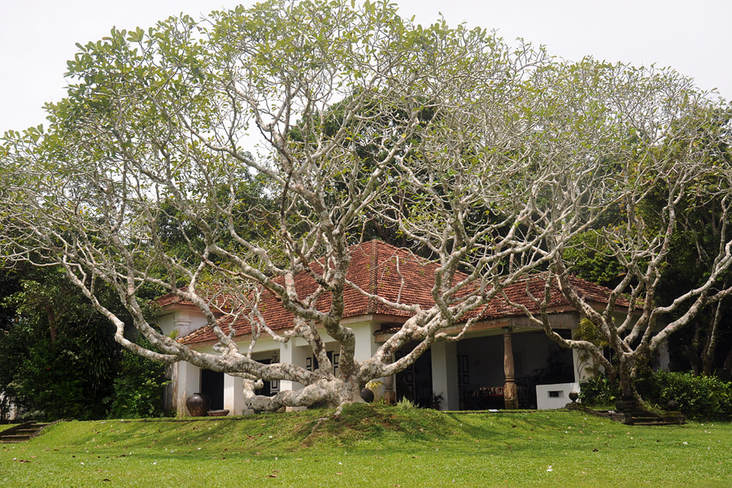 The impressive specimen of a frangipani on the northern terrace overlooking the lake was Bawa’s favourite tree. It was planted in the early 1950s, soon after Bawa purchased the estate. By nature, frangipani are multi-stemmed trees. Bawa hanged weights on the branches, that’s why this terrace tree spread so much wider than usual. He also trained peacocks  to sit on the tree to make the sight even more imaginative. The tree species is known as Araliya in Sinhala, the flowers are much beloved offerings for Buddha statues and stupa altars. 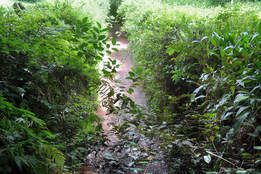 Walking further south, along the lawn in front of the main plantation villa, you have to cross a dirt road, which divides the green into two halves. The agricultural road crossing the lawn cannot be seen from the mansion. You will only notice it when coming very close to it. Bawa used two tricks to hide the grawel road. It is situated in an almost tunnel-like ditch, digged 3 m into the ground below the surface of the green. Along the deepened dirt road, bushes are planted in a way that, from a distance, you cannot perceive the existence even of that ditch. A bridge had to be constructed to connect the northern and the southern part of Lunuganga Garden. Bawa designed it in the form of another garden house, though it also once served as entrance to the garden and is therefore called Gate House. It’s also one of the spaces now used as hotel room valled Gatehouse Suite. 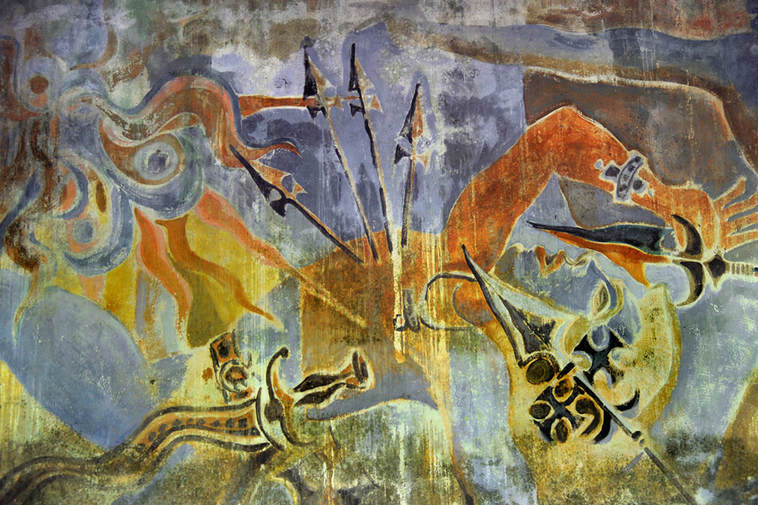 The roofed bridge of the Gate House opens like a verandah. At the wall of this patio is a mural of an Australian friend of Bawa, Donald Friend, who was a draugtsman in the first place and became famous as a diarist only after his death. Volume 3 of his posthumously published diaries also deals with his six years in Ceylon. Most of his time Friend spent as a guest of Bevis Bawa and Geoffrey Bawa in Brief Garden, Lunuganga Estate and Colombo. 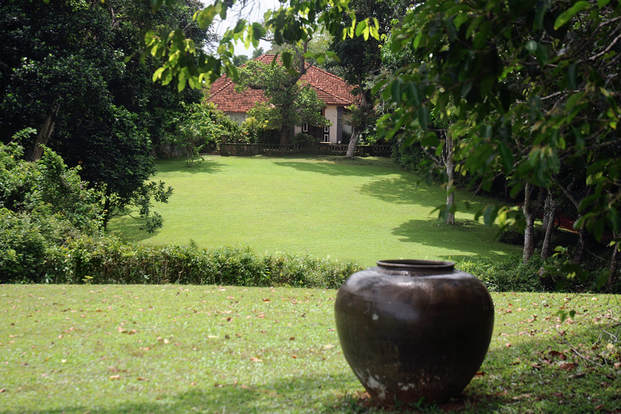 The elevation on the southern side of the main lawn of Lunuganga Garden is called Cinnamon hill. Once, it was indeed part of an overgrown cinnamon plantation. A large jar marks the shadow of the tree under which the ashes of Geoffrey Bawa were distributed, without a grave stone nor with memorial inscriptions. 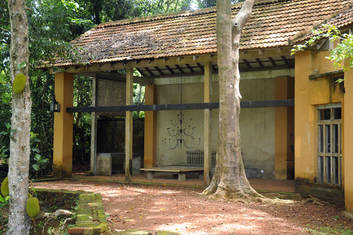 The Cinnamon Hill House in the forested area at the western slope was the last addition to the Garden. It served as accommodation for guests of Geoffrey Bawa. The open verandah became one of his favourite working places. Cinnamon Hill House is available for overnight guests, too. This two-bedroom apartment has its own butler. 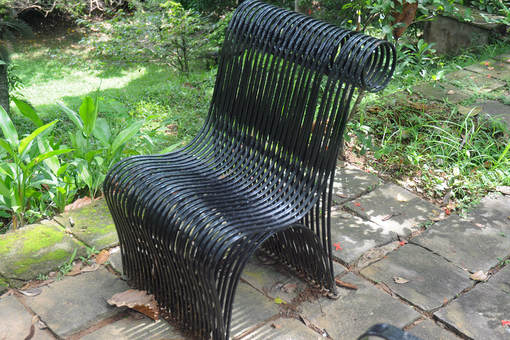 Bawa owned a selection of vintage furnishings, originals from the colonial period in particular. But he also designed modern furniture, some examples of which can be seen in Lunuganga Gardens.

Location of Lunuganga Gardens near Bentota

Lununganga Estate and Gardens, situated on a peninsula in Dedduwa Wewa, is in only 5 km distance to the southeast of Bentota Beach.