Not far from Aukana, just 11 kilometres away as the crow flies, is anotherBuddha statue of almost the same size. It’s called Sasseruwa Buddha. It’s part of an ancient temple called Rasvehera. There are many different spellings for the monastery and its colossal Buddha, for example “Raswehera” or or "Reswehera" or “Ras Vehera“ and “Sesuruwa” or “Saseruva”. “Sasseruwa” in Sinhalese language sounds a little bit like the words for “similar image”. And there would be good reasons for this name.

There is a famous legend, that the two statues are the result of a guru-gola competition, “guru” meaning “teacher, master” and “gola” is “pupil”. This story is an explanation why the Aukana statue is perfected, whereas the similar Sasseruwa statue is almost finalized but not completely. So the story goes: The Guru constructed the Avukana statue, while his Gola made the statue at Sasseruwa. They had agreed that the first one to complete his statue had to notify this to the other by ringing a bell. The Guru managed to complete his statue earlier and then signalled it by the ringing of a bell. When the Gola heard the sound of the bell, he understood to have lost the competition and instantly ceased continuing his work. This is why the Sasseruwa Buddha remained unfinalised. However, there is another explanatory legend that Sasseruwa was a kind  prototype of the Aukana statue carved by the same sculptor. 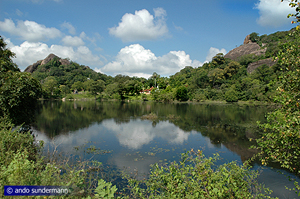 Admittedly, the Aukana Buddha is the greater work of art. Nevertheless, many visitors are even more enchanted by the Sasseruwa Buddha. The reason for it is the silence and the beauty of the location, The rock is higher and more secluded, just in the middle of nowhere. The ancient Rasvehera cave monastery and its colossal Sasseruwa Buddha statue, undisturbed by mass tourism, is still an off the beaten track destination, though, as already mentioned, not far from Aukana. But it’s at the remote point of a dead-end road.