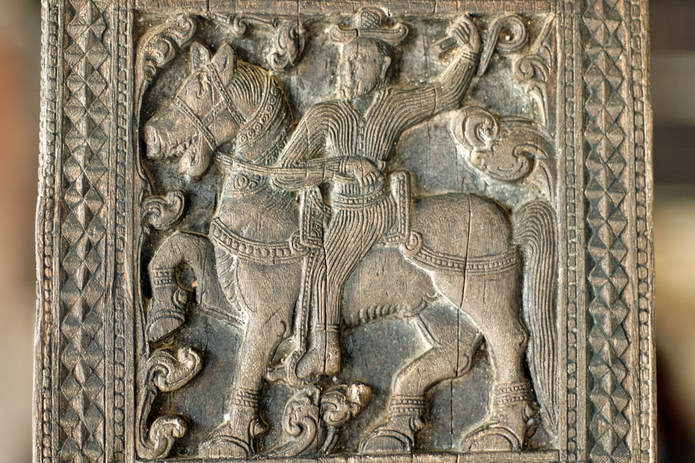 Embekke Devale, also spelt Ambekka Devalaya, is one of the three so-called “Western Temples” which are situated to the west of Kandy and to the north of Gampola, the other two being Lankatilaka and Gadaladeniya. The Embekke Devale is often attributed to the Gampola period of the Late Middle Ages (14th century). The surviving structures of the Embekke Devale, however, are mainly from the Kandyan period. In contrast to the other two Western Temples, Embekke’s main shrine is Hindu, dedicated to Kataragama, but an attached shrine is Buddhist. In Lankatilaka and Gadaladeniya, it’s the other way around. The Hindu deity Kataragama, the Sri Lankan version of Skanda aka Murugan, is venerated by Buddhist Sinhalese, too.
The feature Embekke is most famous for - and therefore its main attraction - is the wooden Digge, the wooden “Drummers’ Hall”, the pillars of which carries the very best specimen of Kandyan woodcarvings, altogether more than 100 specimen, many of which are masterpieces. Besides ornaments, they depict human beings and mythical animals including fabulous creatures, secular and religious scenes alike. Almost every motif is represented by more than one carving, but the design of each carving is unique, for example the ways of depicting the clothing differ. Till the present day, Embekke is a village of woodcarvers.

Location of the Embekke temple

The temple is situated at the western end of the east-west axis, which is the single street of this hamlet. The small hamlet is inhabited by temple servants, artisans and very few shopkeepers, there are facilities for Sinhalese pilgrims in particular. Another workshop of a woodcarver can be found outside the hamlet, at the gravel road to the village of Embekke.

Names of Embekke and Kataragama and Gampola

"Embekke" is pronounced with a short "Ae" at the beginning and stressed on the second syllable. Many other spellings are common: Embakke, Embakka, Ambekke, Ambakka, etc. A German transliteration would be "Ämbekke". The name is derived from "Ann-bakka", which literally means "horn-big" in Sinhala. "Anbakka" is said to have been the former name of the  place. The ancient name refers to one of the many local traditions of Embekke. In ancient times, an annual ritual called "Ankeliya" was celebrated here in honor of the goddess Pattini. An extraordinarily big horn safekept in the nearby village played a crucial role in the ceremonies of this festival.

History of the Embekke Devale