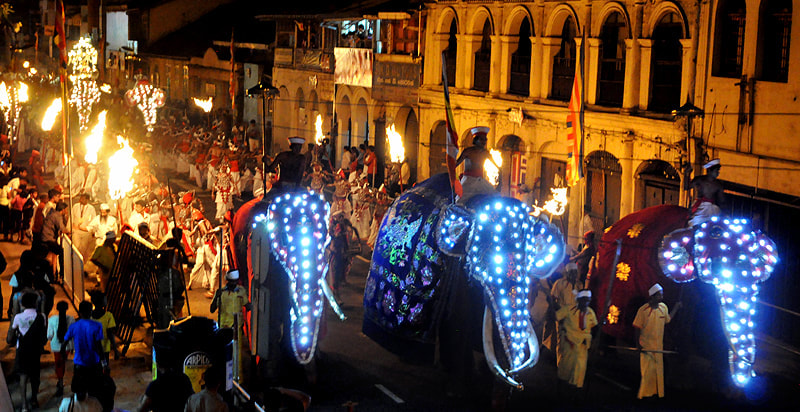 Kandy Perahera, one of Asia's highly traditional and most spectacular parades, takes place in the Buddhist month of Esala, usually in August. The Kandy festival season lasts a fortnight. There are three stages of the Kandy festival, each for a period of 5 days. The largest pageants with the highest numbers of tuskers take place in the last five nights, culminating in the very last night of the festival period.

For finding the 2023 dates for the various kinds of parades and more details concerning the course of the festival fortnight - please scroll down or click here...

In the month of August you have opportunities to see impressive festivals also at other places closer to coastal holday destination. To learn about the alternatives, please click here...

In general, the final night of the Kandy Perahera festival season is on Nikini Poya Day, which marks the end of the month called Esala. Nikini Poya is the Buddhist astrological full moon night in August. Usually, this coincides with the astronomical full moon night. However, in some years Nikini Poya can be one night earlier or later than the astronomical full moon time suggests. Thus be aware: There is no guarantee that Nikini Poya falls on the date mentioned as August full moon in your calendar! Furthermore, the date of the astronomical fullmoon day in Sri Lanka can also differ one day from that in East Asia or Europe or America, just due to different time zones. Furthermore, there is no guarantee that the entire festival is dated according to the Nikini date. However, Nikini Poya was the final day of the Kandy festival in recent years. It is highly likely, that this will be the case in 2023, too.

In summary, this means: You can be 99% sure, that the festival takes place in the evenings before and on the evening of the astrological (not necessarily the astronomical) fullmoon in August. The astrological Nikini fullmoon night is 30th August 2023, the official Poya Day (not with an evening procession any more) is 21st August.

Kumbal Peraheras, here seen in front of Queens Hotel, are the first 5 night parades, the subsequent 5 Randoli Peraheras are much larger

Actually, you don't need a seat to see the Kandy procession. Access to all streets in Kandy is free. However, you should be aware: The town is crowded, many locals come many hours in advance to find a place with a good view. When the procession starts, all the streets along the route are overcrowded. You will hardly be able to move and, honestly, you will not see much of the parade, unless you go to those streets that are farer away from the Toooth Temple and choose a night prior to the final festival night.

However, we highly recommend not to stand hours and hours in the crowds but to reserve a comfortable seat on a podium with a much better view. Seats close to the Tooth Temple and Queens Hotel are more expensive than those in some distance. It's your choice. Planning your tour in the second half of August 2019, you should definitely not miss the Kandy Perahara. Although frequented by many foreign guests, this is actually a genuine Sri Lankan festival and NOT A TOURIST SHOW!!! It's really an unforgettable event. Thus, if you are planning your 2019 holidays in August, please let us know your exact dates and your other travelling plans. If you like, we will work out an itinerary including a visit of this spectacular parade. Please contact us...

Accommodation for visits of the Kandy Festival

Though Kandy hotels and guesthouses will charge high seasonal supplements during the Kandy festival days, they are often fully booked many weeks in advance. This is why we recommend to book accommodation in Kandy already some months prior to the Kandy festival days. Please ﻿contact us﻿ for this purpose already before April 2019, if possible.

Alternatively, Lanka Excursion Holidays could reserve accommodation without Kandy Perahera surplus charges in neighbouring towns. You would have to drive about one hour to Kandy (one way) to see the evening Perahera, but could avoid the crowds for the rest of the day.

August is not only the of Sri Lanka’s most famous annual festival called Kandy Perahera. Three other major religious severa-day celebrations take place during the south-western monsoon rainy season, namely the Kataragama festival, the Saman Devale Perahera and the Bellanwila Perahera. In some years some of these festivals coincide.

Kataragama Festival in the month of Esala

Kataragama is the name of one of both a god and its temple town, which is one of the most significant significant places of pilgrimages in Sri Lanka. Kataragama is situated near Yala National Park in the southeast of the island. The Kataragama festival is one of the most spectacular events in Sri Lanka, world-famous for its firewalks and piercings of tongue or skin. Interestingly, this festival is joined by Tamil Hindus and Sinhalese Buddhists alike and even by some Muslims. The 15-days festival is celebrated in the month Esala, too, but it usually takes place two weeks earlier than the Kandy Perahera, though in some years the festival times may overlap.

Maha Saman Devale near Ratnapura is the main shrine of Saman, the guadian deity of Siri Pada (Adam’s Peak) and Sabaragamuwa Province. The annual Perahera in Ratnapura usually takes place in a little bit later than the Kandy Perahera. The Ratnapura pageant is the second largest on the island. It’ not much less impressive and spectacular, compared to the more famous Kandy Perahera, though less elephants will be parading. It’s much less frequented by tourists and thereby even more authentic (and less expensive) than the Kandy Perahera. One main feature of the Ratnapura Perahera is an effigy of the giant Maha Baha having two faces into opposite directions, a smiling and an angry one. The procession takes place in August or September.

Bellanwila is situated in the outskirts of Colombo. The temple is prowd to own one of the first 32 saplings of Anuradhapura’s Sacred Bo Tree. The Bellanwila Esala Maha Perahera is the largest procession in the most densely populated area of Sri Lanka in the monsoon season. (Kelaniya festival near Colombo, even large and spectacular, is held in January in the dry season). Bellanwila Perahera usually takes place a little a little nit later then Kandy Perahera.

Other festivals during the same south-west monsoon period are, for example, Vishnu Devala Perahera in Devinuwara (Dondra) at the southern tip of the island and Munneshwaram Perahera, which is Sri Lanka’s longest celebrated festival, held during an entire month. And Esala festival of the historic Sri Devol Maha Devalaya in Seenigama near Hikkaduwa. Not only Buddhist celebrations take place during these months, as there are several Hindu celebrations in August and September on the Jaffna Peninsula, though Sri Lanka’s largest Hindu festival, the Mahostavam (Thiruvizha) at Nagapushani Amman Kovil on the island of Nainativu, is celebrated earlier in the Tamil month of Aani (end of June, begin of July).

July till first half of September is the main period of Perahera festivals in Sri Lanka. Impressive elephant pageants are held in several town in different regions of Sri Lanka. The most famous and probably most spectacular processions, of course, are those in Kandy. By far the largest are the so-called Randoli Peraheras, they are expected to be held in Kandy in the late evening hours of the five final festival days: 26 - 30th August 2023.
Why travel with Lanka Excursions Holidays?

+ We are a local agency owned and run by Sri Lankans, not part of international holdings
+ We are well known for our direct and personal relationships with travellers
+ We facilitate authentic meetings with locals who are not from the tourism sector
+ We follow a strict policy not to push guests to visit shops and shops and shops
+ We have an unrivalled expertise to show you places off the beaten path
+ We provide genuine information instead of clichés and tourism industry slogans

Our ambition is to provide high-quality information in preparation of your Sri Lanka holidays
... and even more superb travel experiences
we also run our own guesthouse near Anuradhapura:
First House Mihintale
87, Missaka Mawatha, Mihintale 50300, Sri Lanka.
0094 71 6097795
if not stated otherwise, texts and photos provided  by Ernst A. Sundermann, sales manager of Lanka Excursions Holidays
all rights reserved, © 2016 Lanka Excursion Holidays